PHILADELPHIA - A meme relating Girl Scout cookies to drugs circulating on social media has some saying it is making light of the drug epidemic impacting so many families.

The meme shows a Girl Scout surrounded by Girl Scout cookies. A caption on it reads “I got clean for nearly a year until I ran into my dealer."

"For someone to use it as a way to sell Girl Scout cookies, it was very insensitive," said Dawn Walton.

She contacted FOX 29 after she saw the meme.

"Unfortunately, a football injury led to an opiate addiction, which then led to heroin," said Walton.

Her son, Boomer, died in Aug. 2018 after a fentanyl-laced heroin overdose.

"For whoever done this to put this on Facebook. Obviously, I hope was not thinking about the families that deal with this day in and day out. I’m glad to know the Girl Scouts didn’t have anything to do with it," said Walton. 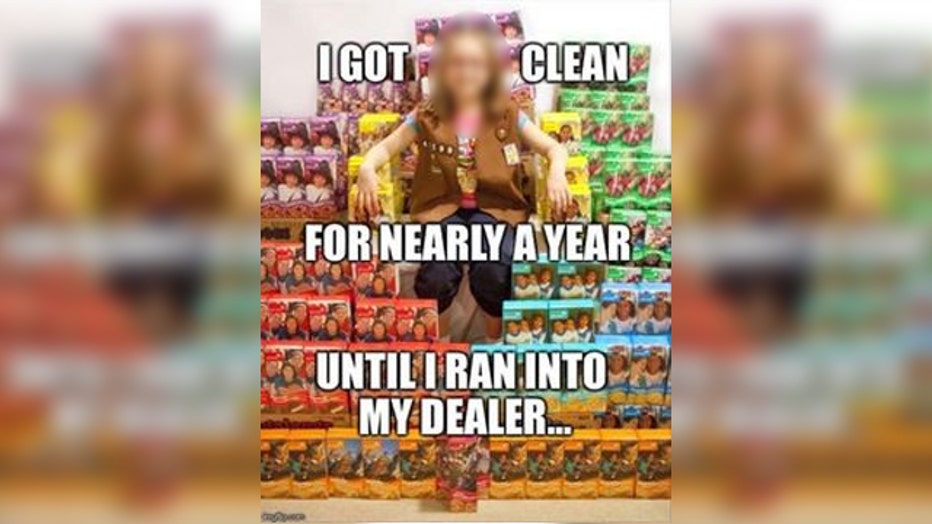 FOX 29 reached out to the Girl Scouts of America and they don't know who created it.

"I would hope that whoever thought this was funny will take it down so it stops going around," said Walton.

On the other side is another mom Darlene Louden, who lost her son Danny to a drug overdose May of last year when he was 27 years old.

"He was a great kid. He loved his family wholeheartedly," said Louden.

She saw the meme and thinks it's in bad taste but says she isn't offended by it.

"It's not something that's going to get me in an uproar or get me all excited and mad," she said. "If that person never had addiction in their life it probably wasn't even a thought in their mind."

A spokesperson for the Girl Scouts of America says they have nothing to do with the meme and that it’s not a position they support nor do they think it’s appropriate.