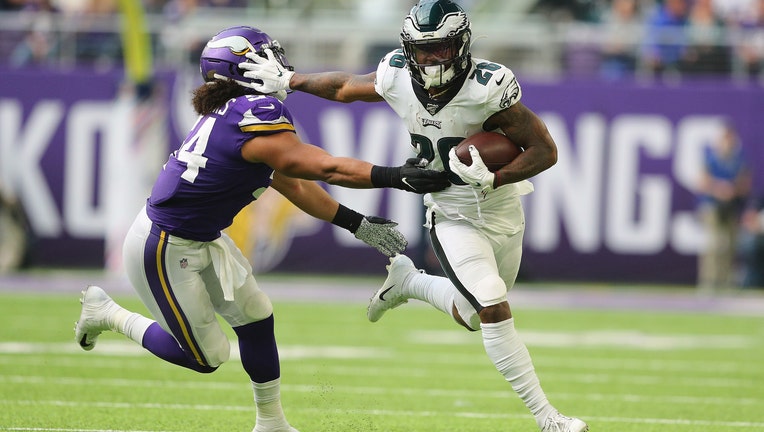 PHILADELPHIA - Philadelphia Eagles running back Miles Sanders and defensive end Derek Barnett have been ruled out for Sunday's season opener in Washington, the team announced on Saturday.

Sanders, who was listed as questionable prior to the announcement, has been dealing with a hamstring injury. ESPN's Adam Schefter says Sanders is 'progressing well' but the team wants to make sure he's healthy for the remainder of the year.

Boston Scott will handle the bulk of the carries for the Birds on Sunday, with Corey Clement also chipping in. The Eagles have Jason Huntley, who was claimed off waivers from Detroit last week, as a third option.

Defensive end Derek Barnett, who is also dealing with a hamstring injury, was downgraded from questionable to out on Saturday. Defensive tackle Javon Hargrave is out with pectoral and hamstring injuries.

Meanwhile, offensive tackle Lane Johnson is listed as questionable with an ankle injury.

For the short term, the Eagles have elevated defensive tackle T.Y. McGill and guard Sua Opeta from the practice squad.