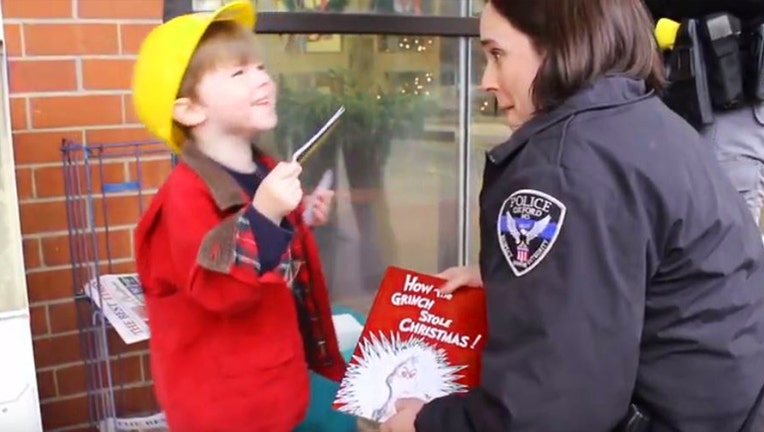 Oxford police Officer Rachel Ratcliffe knew Bailey Stacey's family had had a rough year. The 3-year-old and his parents had stayed in her house when their house next door flooded and the Staceys had to move, the Oxford Eagle reported.

They had moved to Oxford from Jackson in March. Ratcliffe said Bailey "started seeing my police car out front, and then he just came over and introduced himself and asked about police work. I let him climb in there, he turned on the lights and he turned on the siren. He was just always asking how I was doing and if I saved anyone that day.”

Bailey's father, Zack Stacey, said Ratcliffe “would get off her shift and you could tell she was tired, but she would always make time for Bailey and let him play with her car.”

With two officer friends, Ratcliffe set up clues for Bailey to follow to save Oxford — and his own present — from the Grinch. The police department tweeted a video of it all.

Officer Renika Franks set up clues at the Oxford and Lafayette County Library, Avent Park and City Hall, hustling to keep ahead of Bailey and Ratcliffe. “I think I had more fun than Bailey did,” Franks said.

Mayor Robyn Tannehill and Police Chief Jeff McCutchen were in on the fun, and Police Cpl. Blake Horton played the Dr. Seuss character. Bailey caught the Grinch green-handed in the mayor's office, stuffing Christmas presents into his sack. Rather than clapping him in handcuffs, Bailey shook hands with the Grinch, who pointed out his present, a Power Wheels police car.

Since then, Stacey said, his son has run every morning, almost as soon as he wakes up, to make sure his patrol car is still safe and secure.