Pennsauken police saying the driver was impaired at the time of the crash that seriously injured the woman.

PENNSAUKEN, N.J. - Police in Pennsauken say they arrested a man after he crashed his car into a school bus that was dropping off students. A mother who was picking up her daughter from the bus stop was seriously injured.

Miguel Montes just returned from the hospital where his wife is facing a very different and very difficult future.

"This is a dangerous intersection, a lot of things happen here," he said. "My daughter got hit, but she’s bruised up and scraped. My wife is the one that got the worst of it. She got pinned to where the lower part of her knee, down she lost it."

Just after 3 p.m. on Wednesday, his wife, Angela, went out to pick up their daughter from the school bus stop at the corner of River Road and Springfield Avenue like she does every school day. 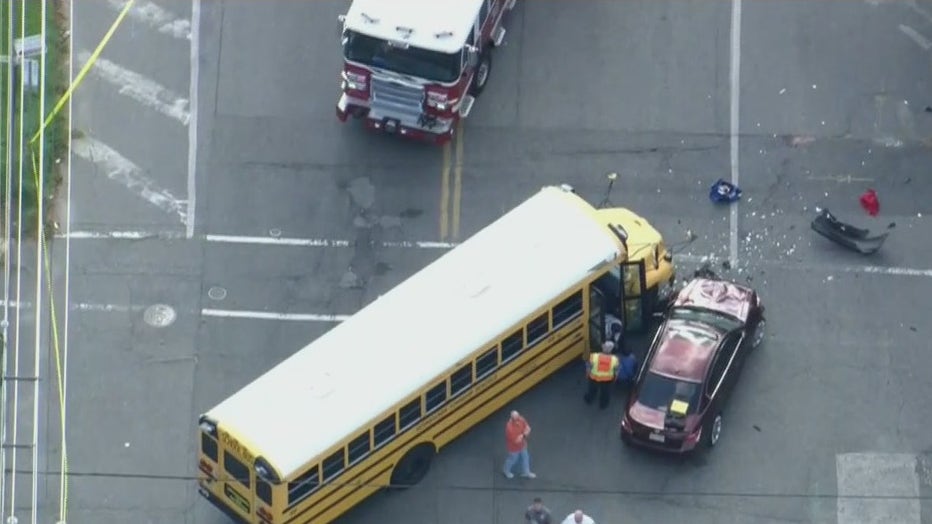 This time though, chaos and tragedy would ensue after a driver slammed into the open doors of the school bus, throwing Angela and her daughter to the ground.

"Seeing my wife, like that, hurting and I couldn’t do anything about it — hurts me. And all for people not obeying the laws of the bus and it happens everywhere happens all the time."

Neighbors and Miguel's sister quickly rushed to the scene to help. What they saw was devastating.

"I’m glad that my daughter is okay and my wife is going to survive. This is going to be a life-changing thing now because of all of this, but we got friends and family and even the community that I don’t know is coming in to give support," Miguel explained.

Pennsauken police saying the driver was impaired at the time of the crash. Police announcing the arrest of 39-year-old Benjamin Ramos. He’s charged with nine total counts, including one count of driving under the influence of CDS.

A GoFundMe has been set up in the montes’ name to help cover the cost of her medical bills and rehab. If you wish to donate, please click here.