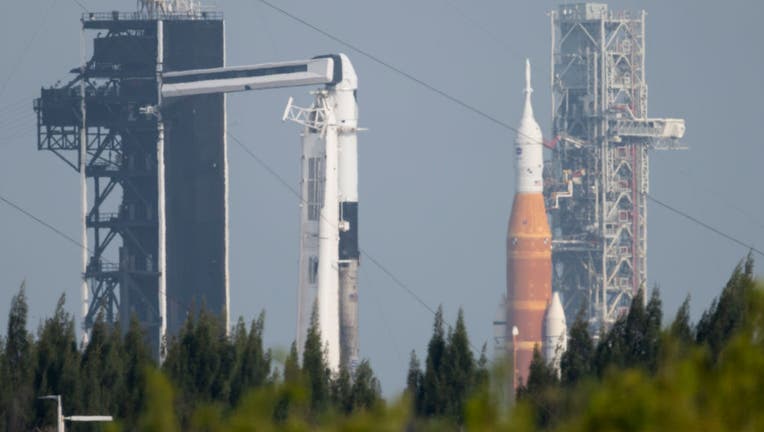 CAPE CANAVERAL, FL - APRIL 6: In this handout photo provided by NASA, NASAs Space Launch System (SLS) rocket with the Orion spacecraft aboard is seen atop a mobile launcher at Launch Complex 39B as the Artemis I launch team prepares for the next atte

CAPE CANAVERAL, Fla. (AP) - NASA’s latest attempt to fuel its huge moon rocket for a countdown test was thwarted Thursday by a hazardous hydrogen leak, the latest in a series of vexing equipment trouble.

The launch team had just begun loading fuel into the core stage of the rocket when the leak cropped up. This was NASA’s third shot at a dress rehearsal, a required step ahead of a test flight to the moon.

This time, the launch team managed to load some super-cold liquid hydrogen and oxygen into the core stage of the 30-story Space Launch System rocket, but fell far short of the full amount. Liquid hydrogen is extremely hazardous, with officials noting that the systems had been checked for leaks prior to the test.

Technicians deliberately left the smaller upper stage empty, after discovering a bad valve last week. The helium valve inside the upper stage cannot be replaced until the rocket is back in its hangar at Kennedy Space Center.

Lightning struck the area around the Artemis 1 dress rehearsal Saturday.

Officials said via Twitter that they’re assessing their next steps.

NASA had been targeting June for the launch debut of the 322-foot (98-meter) SLS rocket. The empty Orion capsule on top will be sent on a four- to six-week mission around the moon and back.

Astronauts will strap in for the second test flight around the moon, planned for 2024. That would be followed as early as 2025 with the first lunar landing by astronauts since 1972. NASA plans to announce the crews for these two missions this summer.