A newborn baby was left inside a dumpster on a day with excessive heat warnings in Stockon, California.

STOCKTON, Calif. - A newborn baby was left inside a dumpster on a hot day in Northern California and was rescued thanks to two good Samaritans, authorities said.

A resident of the nearby Stockton apartment complex thought he heard a cat or baby crying and saw a bag moving on Tuesday, according to Stockton Police Department Public Information Officer Joseph Silva. The man called the apartment manager, who jumped in the dumpster and discovered the newborn wrapped up inside.

Emergency crews responded around 11:45 a.m. local time to the scene, located in the 5900 block of Village Green Drive, and the infant was immediately taken to a nearby hospital for treatment.

It was unclear how long the infant had been in the dumpster, Silva said. 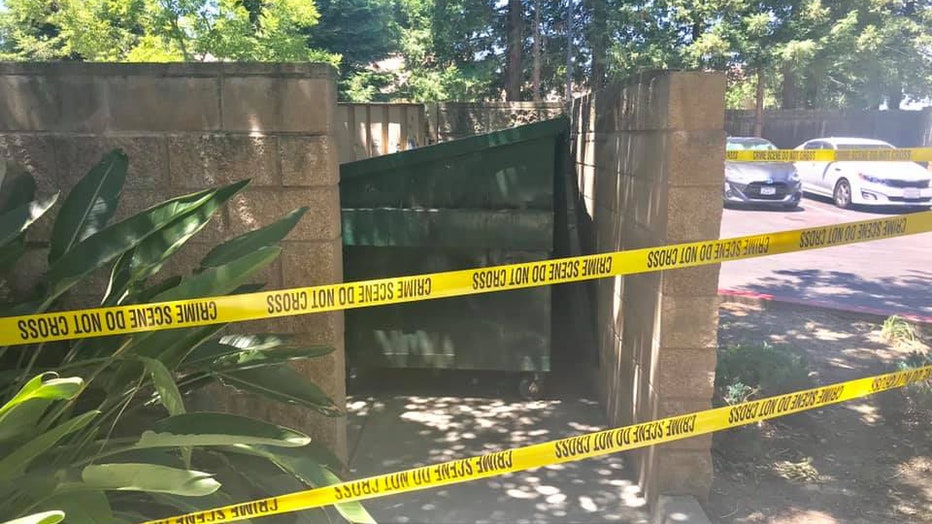 Emergency crews responded to a dumpster in Stockton, California after a newborn baby was found inside. The infant was immediately taken to the hospital. Police later said he was "doing well." (Stockton Police Department)

An excessive heat warning was issued in the area on Tuesday, with highs reaching 105 degrees in Stockton.

“As of now, the baby boy is doing well at the hospital and is in protective custody with child protective services,” the Stockton Police Department wrote Tuesday afternoon on its Facebook page.

Investigators located the newborn's 15-year-old mother near the scene and was also taken to a hospital for treatment, police said. She will be cited for felony child abuse and endangerment and released to her parents.

“We're at 100 degrees temperature, so this situation could have turned into a tragedy if that baby was left in that dumpster for any amount of time,” Silva said. “We're calling those good Samaritans heroes.”

Police said the two men, John Pedebone and Troy Cooper, likely prevented a tragedy from occurring due to their quick actions.

The police department reminded the public that newborn children can be surrendered to designated facilities in the city.

“Please remember newborns can be safely surrendered to any firehouse or hospital emergency rooms in the City of Stockton within 72 hours of birth without fear of being prosecuted as long as the baby shows no signs of abuse or neglect,” the department wrote on Facebook.

Authorities asked that anyone with information about the incident to call the Stockton Police Department.

Stockton is located about 50 miles south of Sacramento.