A metal detectorist is kind of a hero after he found a class ring in the ocean and gave it back to the family it belongs to.

AUDUBON, N.J. - People may have seen folks with metal detectors on the beach at the shore. One man participating in this hobby is kind of a hero after he found a class ring in the ocean and he reunited the ring with the family it belongs to.

"I was fishing and never caught a fish," Busarello said. "So my son bought me a metal detector about three years ago and then I started finding things."

June 18th, he unearthed a George Washington High School class of 1976 ring in North Wildwood. His guess is that it popped up because of beach renourishment, moving the sand around in the area.

The inner band of the ring revealed a clue - the initials CBA.

The Jersey metal detectorist put on his sleuth hat and hit the internet. "I took a look at the class list and there was a person with CBA. I googled and that person had passed away in 2008," Busarello explained.

On Father’s Day weekend, Busarello wanted to act fast to find CBA’s family. Charles Bailey Alpert, a beloved father and husband, and the only person on the list with those initials.

Bill connected to Charles’ son Yale and FOX 29 was there as the ring was returned.

"Oh my god. CBA those are his initials," Yale said.

"The last person that wore that was your father," said Busarello.

"This is incredible it really is," Yale answered.

Charles didn’t have the ring long. Yale's mother said he lost it on the beach the same year he got it.

46 years later, the family has a full circle piece of history they will hold on to forever.

Metal detectorists like Bill are always looking to make more connections. He’s got a couple of rings he’s trying to connect back to the people who own them. Pictures of those rings are displayed. It is a wedding ring a class ring from 1946. Anyone who may know who these belong to can visit this Facebook page to relay information: 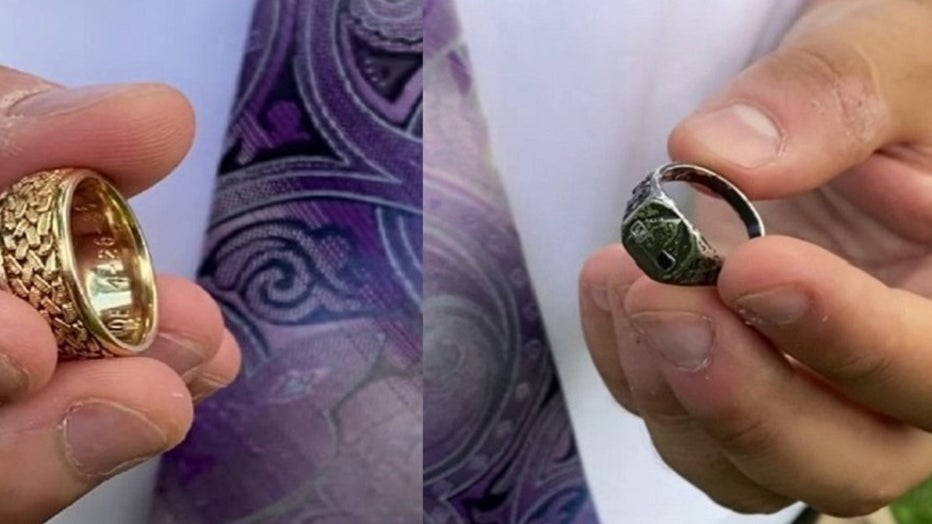