Tiger Woods is recovering at a Torrance hospital following a rollover crash in Rancho Palos Verdes that left him with severe and potentially career-threatening injuries to his right leg and ankle.

During a press briefing Wednesday afternoon, Villanueva said there are no indications that he was impaired in any way.

At most, the investigation could lead to an infraction if it's determined Woods was on his cell phone or distracted in some other way, the sheriff stated. Investigators have not yet pulled a "black box'' from the damaged SUV to determine how fast Woods was traveling when the crash occurred.

"This remains an accident. An accident is not a crime. They do happen unfortunately,'' the sheriff mentioned.

Villaneuva reiterated that there are no indications Woods was impaired in any way, saying "he was lucid, there was no odor of alcohol, no evidence of any medication, narcotics or anything like that that would bring that into question.''

The sheriff also said there are no indications that would suggest a reckless driving charge.

"This is purely an accident,'' he said. "There'll be a cause of it, and there will be a vehicle code attached to the cause -- if it's inattentive driving, whatever the case may be. But that's an infraction, and reckless driving is actually more than an infraction. That's a misdemeanor crime that has a lot of elements attached to it, and there's nothing like that.'' 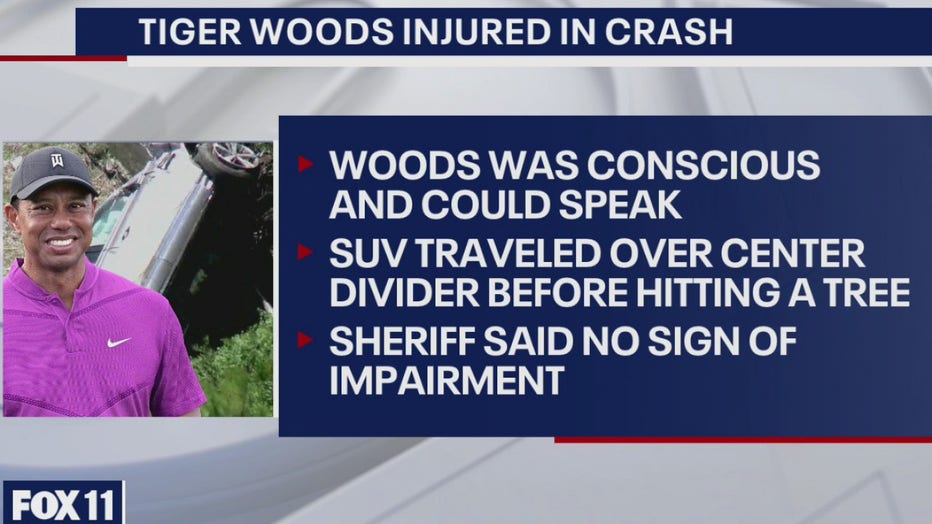 Woods was taken to Harbor-UCLA Medical Center where he underwent surgery on his lower right leg and ankle. In a statement released Tuesday night on Woods' Twitter account, Dr. Anish Mahajan, Harbor-UCLA Medical Center's chief medical officer and interim CEO, said Woods had "comminuted open'' fractures -- meaning there were multiple breaks that left the bone exposed to open air -- in the upper and lower portion of "both the upper and lower portions of the tibia and fibula.''

The fractures were stabilized by "inserting a rod into the tibia,'' Mahajan said. "Additional injuries to the bones of the foot and ankle were stabilized with a combination of screws and pins. Trauma to the muscle and soft-tissue of the leg required surgical release of the covering of the muscles to relieve pressure due to swelling.''

According to the statement, Woods was "awake, responsive and recovering in his hospital room.''

RELATED: What kind of car was Tiger Woods driving?

Woods has been involved had two other high-profile auto incidents. In November 2009, he crashed his SUV into a fire hydrant outside his Florida home and suffered minor injuries. In 2017, he was found asleep in a vehicle in
Jupiter, Florida, and was found to have multiple painkillers and sleeping aids
in his system. He subsequently entered a diversion program.