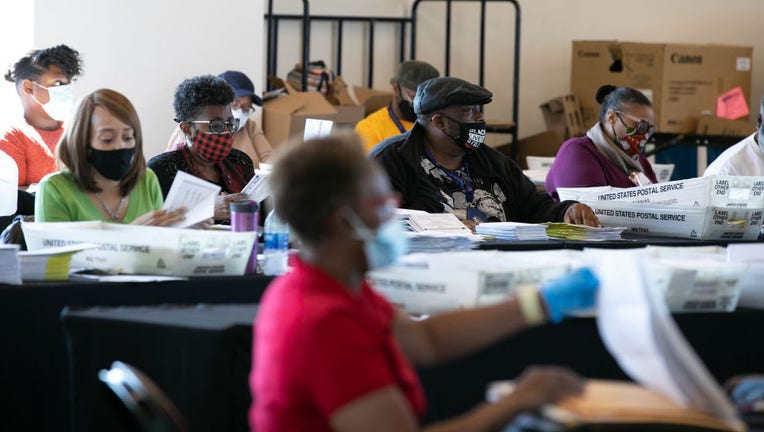 ATLANTA - A judge has dismissed conservative cable news channel One America News Network from a defamation lawsuit filed by two Georgia election workers after the two sides reached a settlement.

Fulton County election workers Ruby Freeman and Wandrea "Shaye" Moss in December sued OAN, its owners and its chief White House correspondent over debunked claims that the mother-and-daughter pair introduced suitcases of illegal ballots while working as ballot counters at the State Farm Arena in Atlanta in November 2020 and committed other acts of fraud to try to alter the outcome of the presidential election in Georgia.

The terms of the settlement agreement were not disclosed, but both sides described it as fair.

Freeman and Moss on Wednesday filed a motion to dismiss OAN from the lawsuit, and U.S. District Judge Beryl Howell signed off on the dismissal Thursday.

The two women had also sued former New York City Mayor Rudy Giuliani, a lawyer for former President Donald Trump, saying he amplified the lies about them during frequent appearances on OAN. Their claims against Giuliani continue: They filed an amended complaint Wednesday in federal court in Washington.

OAN on Monday tweeted a clip from its broadcast with an anchor describing an "updated report from Georgia officials." A voiceover then says state officials "have concluded that there was no widespread voter fraud by election workers who counted ballots at the State Farm Arena in November 2020. The results of this investigation indicate that Ruby Freeman and Wandrea ‘Shaye’ Moss did not engage in ballot fraud or criminal misconduct while working at State Farm Arena on election night." The clip goes on to mention the settlement between the network and the two women.

In fact, Georgia officials concluded in late 2020, shortly after the allegations against the two women surfaced, that the pair had done nothing wrong.

Moss and Freeman also filed a separate defamation lawsuit against The Gateway Pundit, its owner Jim Hoft and his brother Joe Hoft, a contributor to the conservative website. That lawsuit is pending in federal court in Missouri.

After narrowly losing the presidential election in Georgia, Trump made unproven claims that widespread fraud led to his loss in the state. He particularly zeroed in on Fulton County, a Democratic stronghold that includes most of Atlanta.

Moss has worked for the Fulton County elections department since 2012 and supervised the absentee ballot operation during the 2020 election. Freeman, her mother, was a temporary election worker, verifying signatures on absentee ballots and preparing them to be counted and processed.

When their names circulated online along with allegations that they had engaged in fraud, the two women said they were subjected to intense harassment, both in person and online.