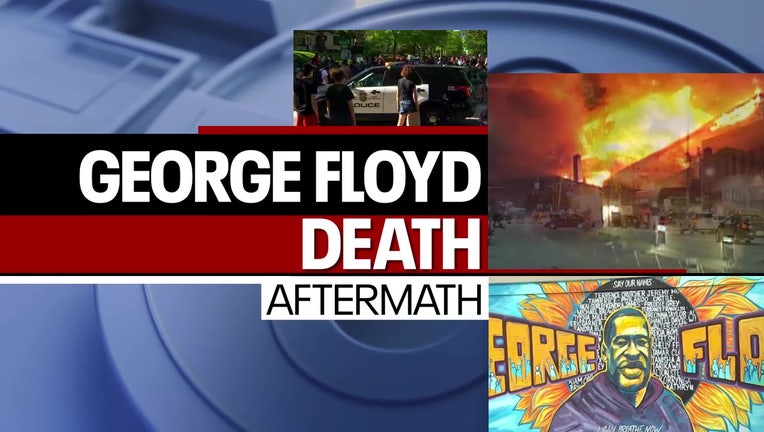 WASHINGTON - As protests over the death of George Floyd grow in cities across the U.S., government officials have been warning of the “outsiders” -- groups of organized rioters they say are flooding into major cities not to call for justice but to cause destruction.

But the state and federal officials have offered differing assessments of who the outsiders are. They’ve blamed left-wing extremists, far-right white nationalists and even suggested the involvement of drug cartels. These leaders have offered little evidence to back up those claims, and the chaos of the protests makes verifying identities and motives exceedingly difficult.

Police officers across the country were gearing up Saturday for another night of potentially violent clashes in major cities. Some states had even called in the National Guard to aid overwhelmed police.

The finger pointing on both sides of the political spectrum is likely to deepen the political divide in the U.S., allowing politicians to advance the theory that aligns with their political view and distract from the underlying frustrations that triggered the protests.

Minnesota Gov. Tim Walz on Saturday told reporters he’d heard unconfirmed reports that white supremacists were coming from elsewhere to stoke the violence and that even drug cartels “are trying to take advantage of the chaos.” John Harrington, the state’s commissioner of public safety, later said they had received intel reports on white supremacists.

“But I cannot say that we have confirmed observations of local law enforcement to say that we’ve seen cells of white supremacists in the area,” he said Saturday.

But federal officials later pointed “far left extremist groups." President Donald Trump alleged the violence was “being led by Antifa and other radical groups.” Antifa, short for anti-fascists, is an umbrella term for far-left-leaning militant groups that resist neo-Nazis and white supremacists at demonstrations.

A Justice Department spokesperson said the attorney general’s assertion was based on information provided from state and local law enforcement agencies, but did not detail what that information entailed.

Acting Homeland Security Secretary Chad Wolf was even more vague, declining to point to any particular ideology in his assessment. His agency has heard that “a number of different groups are involved in these whether it’s Antifa or it’s others, frankly," he said. The groups appeared to be organized and using tactics that wouldn’t normally happen in peaceful protest, he said, though he didn’t elaborate.

While the motives behind the violence was unclear, there was firmer evidence that some of the protesters were coming to the demonstrations from outside the urban centers that have been the epicenter of the demonstrations.

In New York City, federal officials were bringing charges against several suspects, including one of two sisters from upstate New York accused of throwing a Molotov cocktail through the back window of a police van in Brooklyn, a law enforcement official said. The initially peaceful demonstrations in New York City over Floyd’s death spiraled into chaos as night fell Friday. Protester confronted police officers, destroying police vehicles and setting fires.

In Detroit, 37 of the 60 people who were arrested in overnight protests did not live in the city — and many came from nearby suburbs, police Chief James Craig said Saturday. Although Detroit is about 80% black, many of those arrested were white.

“We support the right to free speech. We support peaceful protests,” Craig told reporters. “If you want to disrupt, stay home and disrupt in your own community.”

Initially, St. Paul Mayor Melvin Carter said he’d been told all of those arrested in his city Friday were from outside the state. But a spokesman said Saturday night the mayor had later learned more than half are from Minnesota.

In Hennepin County, which includes Minneapolis, 47 of the 57 people arrested in protest incidents through Saturday morning had provided a Minnesota address to authorities, according to Jeremy Zoss, a spokesman for the Hennepin County Sheriff’s Office.

Carter expressed the opinion of many black activists in the Twin Cities who have expressed disbelief that local residents would destroy their own neighborhoods, burning down essential services and damaging small businesses. And while it was local protesters and groups that staged initial angry, but peaceful, demonstrations, it was agitators from elsewhere that strategically escalated the tension by causing damage and setting fires, they said. Their beliefs were reinforced by the large numbers of white people in the protests in Minneapolis.

“I think about third of the people are from out of town here to make the city burn,” said Justin Terrell, executive director of the Council for Minnesotans of African Heritage. “It is just putting black people in a crossfire not just between fascists and anarchists -- but putting us in a crossfire with the national guard.”

It’s exceedingly difficult in the chaos and dark of the events to prove these claims. The challenge is made harder in the Minnesota protest, where very few arrests were made in the first two nights of unrest. St. Paul arrest records showed 18 people were arrested on charges related to civil unrest from Thursdasy to early Saturday morning. Of those, only four were from outside the state; two were listed as unknown.

Still, some civil rights leaders had a clear message for anyone coming to protest, even those who show up to call for justice for Floyd.

“The moment has passed. Go home, stay away from here. We are a vulnerable population. At the end of that day if black folks can’t rebuild then the only thing we’ve done is build more power for white folks," said Terrell. "You’re talking about years, decades of work undone by these groups -- and by the officer.”

Trump vowed Saturday that the “radical left criminals, thugs and others” would “not be allowed to set communities ablaze.”

“I will not allow angry mobs to dominate,” he said. “Won’t happen.”