CONCORD TWP., Pa. - Officials say a man attempted to lure a Garnet Valley Middle School girl after she exited the school bus. Fortunately, the girl did all of the right things and got home safely.

The alleged incident happened Tuesday afternoon between the short stretch of Grand Homes on Rebecca’s Lane near Thornton Road.

The Garnet Valley School District says a Hispanic or Asian man, possibly in his mid-to-late 40s with short black hair and a beard, pulled his cream-colored sedan next to the girl. He was reportedly wearing a baseball cap.

According to officials, the man then showed her a sexually explicit video on his phone.Then, he asked the middle schooler if she would engage in those sexual acts with him, officials said.

This prompted the young girl to flee and she fortunately made it home safely. 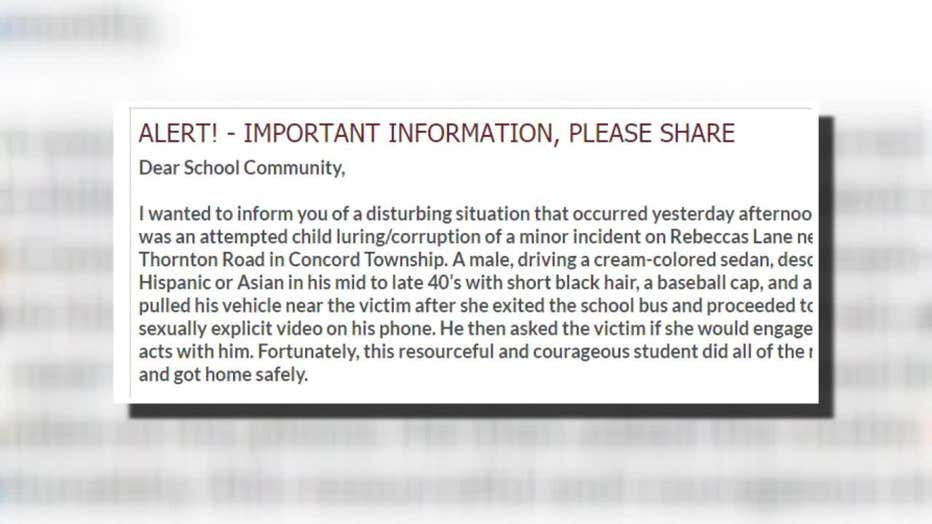 He sent a note to parents and wants everyone to keep their eyes open.

In the letter to the school community, he described it as a "disturbing situation" before he went in depth with further details.

Parents in the community react and told FOX 29 how they've taught their kids to deal with potentially dangerous situations such as this one.

Police are investigating after a man attempted to lure a girl in Concord Township. FOX 29's Lauren Dugan reports.

“She followed all the protocols we would want a student to follow as did the parents," Superintendent Dr. Bertandon explained. "So they're the heroes in this. They did a great job.”

If anyone has information regarding this incident, please contact the Pennsylvania State Police, Media Barracks at 484-840-1000 or 911 for an immediate issue.