Over 1,000 dead birds found in the streets after crashing into Philadelphia skyscrapers

Hundreds of birds were found dead after flying into skyscrapers in Philadelphia. FOX 29's Hank Flynn has the story.

PHILADELPHIA - Over 1,000 dead birds were found dead in the streets after they flew into Philadelphia skyscrapers.

Warning: Some readers may find the images disturbing.

As a volunteer for the Pennsylvania Audubon Society, Stephen Machevsky collects the small, frail bodies of birds that have crashed into glass windows and fallen dead to the sidewalk. Typically, it’s dozens a day, but not last Friday.

“And I mean birds were just falling out of the sky. I couldn’t believe it. I would collect a few and people would say there’s some more over there,” Machevsky said. 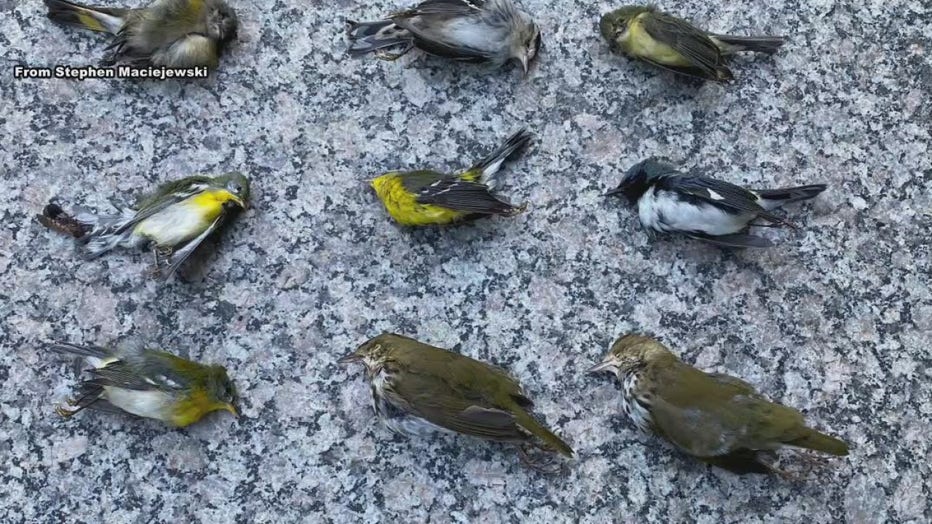 The Audobon Society estimated 1,500 birds died. FOX 29’s Hank Flynn reports it happened in New York and DC as well.   Machevsky thinks the last time it happened in Philly was 72 years ago. So what gives?

“We’re trying to figure that out.  The things we can’t say? It was a full moon. It was the peak of the center of the bird migration.  We had a storm going on. It was raining, the clouds were low, and all of that contributed to it,” Machevsky added,

As many as a billion birds are estimated killed each year in window strikes, but it’s not just skyscrapers.  It’s your house windows, too.

Dr. Christine Sheppard of the American Bird Conservancy says you can help birds out.

She adds you can take simple measures to stop it from happening at your home like installing insect screens.