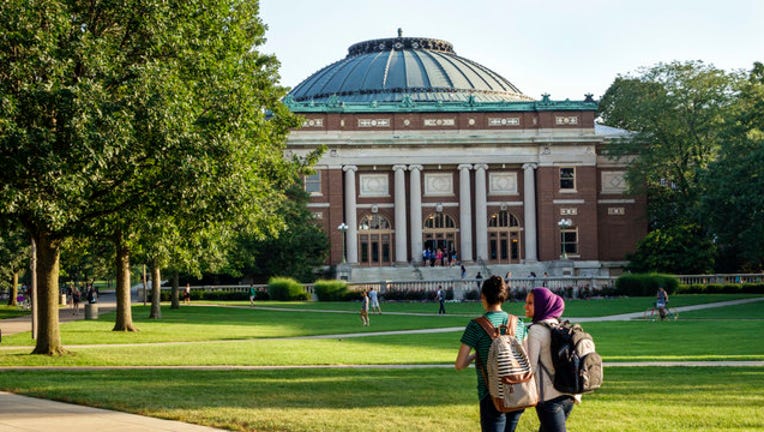 The U.S. Education Department is being urged to close a loophole that has allowed some wealthy families to get federal, state and university funding that's meant to help needy students.

Federal authorities were notified last year that some parents in Illinois were transferring custody of their children to friends or relatives to make it appear they came from poorer backgrounds. In doing so, they became eligible for scholarships and federal grants that are typically reserved for low-income students.

Disclosure of the practice comes at a time of intense debate over the fairness of college admissions. Earlier this year, federal authorities say they uncovered a sweeping scheme in which wealthy parents paid bribes to get their children into elite universities across the nation .

The latest case was uncovered at the University of Illinois after guidance counselors at nearby high schools caught wind of the scheme and notified the school's admissions office. University officials soon noticed a pattern of students coming from certain Chicago suburbs with recent guardianship transfers and similar language in their applications. In total, the school says it has identified 14 cases over the last year.

Andy Borst, director of undergraduate admissions, said that while the strategy appears to be legal, it's ethically questionable. By tapping into funding for needy students, he said, wealthy families deprive students who legitimately need help. Some of the families were able to obtain state grants that are first-come, first-served, while thousands of other students were turned away.

"Financial aid is not infinite," he said. "There are students who are eligible for need-based aid who are not receiving their awards because the state runs out."

The Education Department's inspector general said it's aware of the issue and is urging the agency to add new language to its rules to close the loophole. Under the proposed update, changes of guardianship would not be recognized "if a student enters into a legal guardianship but continues to receive medical and financial support from their parents."

A statement from the department said it's weighing how to respond.

"Those who break the rules should be held accountable, and the department is committed to assessing what changes can be made - either independently or in concert with Congress - to protect taxpayers from those who seek to game the system for their own financial gain," according to the statement.

The scheme, which was first reported Monday by Pro Publica and The Wall Street Journal, has been traced to clusters of parents in Chicago suburbs. It's unclear how widespread the scheme reaches, but Pro Publica reported that students involved have been accepted to schools including the University of Missouri, the University of Wisconsin and Indiana University. Those schools said they're looking into the issue.

A statement from the University of Wisconsin said it will review all cases of legal guardianship to verify "genuine financial need." Indiana University said it will contact any involved students and request documentation to verify financial aid eligibility. The University of Missouri said it has a "very small number" of suspected cases but will pull institutional aid from any students who misrepresented their financial status.

News of the scheme is likely to trigger a wave of similar investigations at colleges across the country as officials try to determine the scope, according to admissions and financial aid groups.

"I can guarantee that they are going to start doing some digging on their own campuses to see if they see any patterns," said Jill Desjean, a policy analyst at the National Association of Student Financial Aid Administrators.

Some parents told Pro Public and The Journal that they transferred custody of their children on the advice of a college consulting firm called Destination College, based in Lincolnshire, Illinois. The company's website promises to help parents pay for college "in the most efficient and inexpensive way." The firm did not respond to a request seeking comment.

After having their custody transferred, students can claim they are independent of their families and apply for financial aid using their own earnings rather than their families'. That would typically qualify them for federal Pell Grants, which are capped at about $6,000 a year, and an Illinois state program that provides about $5,000 a year. It could also make them eligible for university scholarships that range as high as the full cost of tuition.

Mark Sklarow, CEO of the Independent Educational Consultants Association, says both the guardianship scheme and the bribery scandal are symptoms of the spiraling cost of college tuition. Still, he denounced the scheme and said it unfairly robs students who need the most help.

"Guardianship laws are designed for when parents are unable or should not be responsible for a child's well-being," he said. "It isn't something that is meant to be traded away in order to beat the system."

To help spot the scheme, the University of Illinois added new questions for applicants who indicate they've had changes in guardianship. They're now asked who pays their cellphone bills, for example, and their health care costs. But school officials and financial aid experts are wary of making the process overly complicated for students who have undergone legitimate custody transfers.

"We don't want to see them having to jump through additional hoops," said Desjean, of the financial aid association. "It could place an extra burden the most vulnerable students who really are in legal guardianship."

Among the most immediate questions for the University of Illinois is whether to continue providing university aid to students who used the scheme. Officials said they're still deciding. But when it comes to federal and state aid, the school is legally required to keep that money flowing to eligible families, said Borst, the admissions director.

"We've addressed it as much as we are able to legally," he said. "But we're still stuck with having to provide federal and state aid to families who are manipulating the financial aid process."