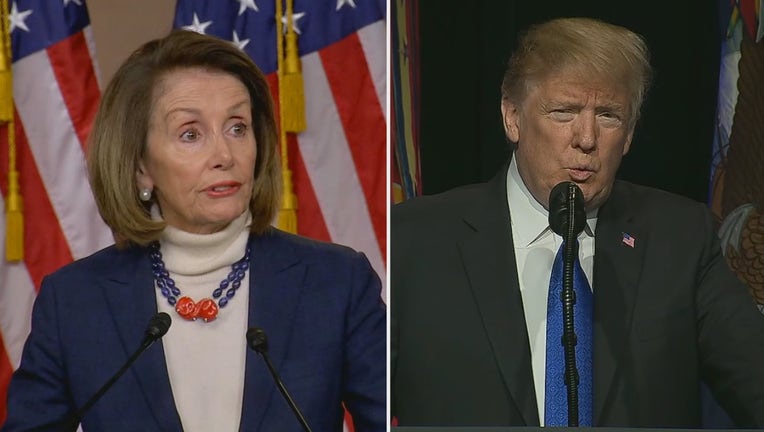 WASHINGTON DC - House Speaker Nancy Pelosi, D-Calif., on Saturday hit parts of President Trump’s deal with Mexico on stopping migrant flows after he threatened to slap tariffs on the country -- saying that Trump was engaged in “threats and temper tantrums.”

“President Trump undermined America’s preeminent leadership role in the world by recklessly threatening to impose tariffs on our close friend and neighbor to the south,” she said in a statement.

“Threats and temper tantrums are no way to negotiate foreign policy,” she said

Trump announced Friday that the U.S. and Mexico had reached a deal, after he had previously threatened to slap 5 percent tariffs on all incoming goods from Mexico -- a warning that had sparked concern from both Democrats and Republicans about the trade deal negotiated between the U.S., Canada and Mexico.

According to a joint declaration issued by the State Department and Mexico late Friday, Mexico will take “unprecedented steps to increase enforcement to curb irregular migration, to include the deployment of its National Guard throughout Mexico, giving priority to its southern border.”

The U.S. will also expand its “Remain-in Mexico” policy of returning asylum applicants to Mexico while their claims are processed. The U.S. committed to accelerate asylum claims while Mexico said it will “offer jobs, healthcare and education according to its principles.”

Pelosi said Democrats are “deeply disappointed” by the expansion of “Remain-in Mexico” and said it violates the rights of asylum-seekers, and fails to address the root causes of migration flows from Central America. She also promised that Congress would continue to put pressure on the administration on immigration.

“Congress will continue to hold the Trump Administration accountable for its failures to address the humanitarian situation at our southern border,” she said. “President Trump must stop sabotaging good-faith, constructive, and bipartisan efforts in Congress to address this complex problem in a humane manner that honors and respects our most cherished national values.”

She also called on the administration to “do much more to cooperate in a meaningful way with Mexico in cracking down on smuggling networks.”

“It’s failure to do so thus far is unconscionable and irresponsible,” she said.

Trump on Saturday took a swipe of his own at House Democrats, saying they are getting “nothing done.”

Get more updates on this story from FoxNews.com.