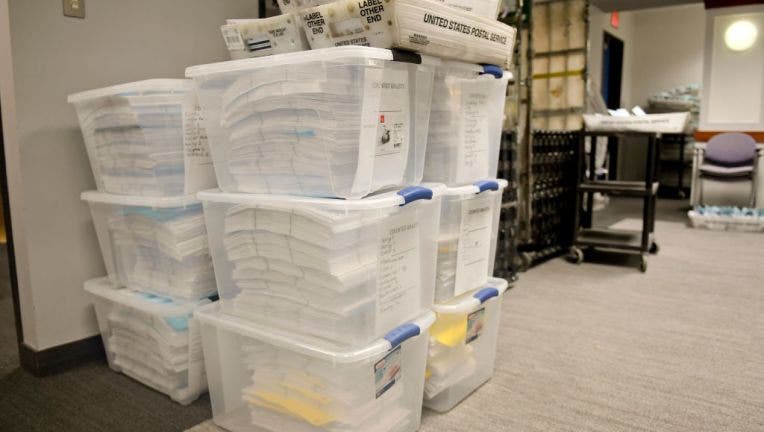 HARRISBURG, Pa. - With concerns rising in Pennsylvania that tens of thousands of mail-in ballots will be discarded in the presidential election over technicalities, officials in the presidential battleground told counties they aren't allowed to reject a ballot solely because an election official believes a signature doesn't match the one in the voter’s file.

The new guidance from Pennsylvania’s Department of State — that state law does not allow counties to set aside mail-in ballots based on their signature analysis — prompted the League of Women Voters of Pennsylvania and the Urban League of Greater Pittsburgh to drop a lawsuit in federal court Monday.

The groups had cited the lack of guidance on the subject and sought to ensure that voters have the chance to fix ballots that are flagged for a perceived signature mismatch.

"As a result of this case, Pennsylvania voters can cast their vote without fear that their ballot could be rejected solely because an election official — who isn’t trained in handwriting analysis — thinks their signatures don’t match," said Mark Gaber, a Campaign Legal Center lawyer who represented the groups in court.

In Pennsylvania’s June 2 primary election alone, when 1.5 million voted by mail, more than 26,000 ballots were rejected, including for “signature-related errors or matters of penmanship,” the

One county election director, L. Edward Allison Jr. of Lawrence County, said that the state's guidance is in line with his county's practices and that he doubts it will be controversial with counties. One way of fixing it is to contact voters to come in to verify their signature, he said.

“We recognize the fact that, as people age, their signature changes, I know mine has,” Allison said in an interview. “Different medical conditions, strokes, all that kind of stuff enters into it.”

Meanwhile, with seven weeks until the Nov. 3 election, a

To a great extent, Gov. Tom Wolf, a Democrat, and the Legislature's Republican majorities are clashing over how to prevent vast numbers of ballots from being discarded because of technicalities and how to head off the specter of a presidential election result hanging in limbo on a drawn-out vote count and legal fight in Pennsylvania.

Republicans have said any changes must ensure the election is secure. Democrats accuse Republicans of pursuing voter suppression tactics, including trying to outlaw drop boxes and satellite election offices that Democrat-heavy counties in southeastern Pennsylvania, including Philadelphia, are planning to use.

To help count mail-in ballots quickly after polls close, Wolf wants to give counties up to three weeks before Election Day to start processing them, instead of the three days favored by Republicans.

To ensure fewer mail-in ballots are discarded, Wolf wants to require counties to count mail-in ballots that arrive up to three days after Election Day, provided they are postmarked before polls close. Republicans oppose that and would rather move the deadline by which voters can request a mail-in ballot, from a week before the election to 15 days before, to leave more time for voters to return it.

Without an agreement on legislation, “we really do risk becoming Florida in 2000,” state Rep. Kevin Boyle, D-Philadelphia, said.

A 2019 state law greatly expanded access to mail-in balloting in Pennsylvania and, fueled by concerns over the pandemic, more than 3 million voters are expected to cast ballots by mail in the Nov. 3 election.

That's more than 10 times the number who voted by mail in Pennsylvania in 2016's election when President Donald Trump's 44,000-vote victory over Democrat Hillary Clinton in Pennsylvania helped propel him to the White House.

For now, counties are still awaiting one court decision before they can get ballots printed and send them to voters who applied for a mail-in ballot.

AP’s Advance Voting guide brings you the facts about voting early, by mail or absentee from each state: