Jeanne Franklin, of the Chester County Department of Health, joins Good Day Philadelphia to discuss what the shortages mean.

HARRISBURG - The Wolf administration and a bipartisan group of state lawmakers are forming a vaccine task force that will brainstorm ways to get COVID-19 shots into Pennsylvanians’ arms more rapidly.

A persistent lack of supply and the state’s laggy distribution system have slowed efforts to vaccinate more than 4 million Pennsylvania residents who are currently eligible for the vaccine.

Only about a quarter of those residents — including people age 65 and over and younger people with serious medical conditions — have gotten at least one of the two required doses.

The task force will include officials in Gov. Tom Wolf’s administration who are running the state’s vaccine effort, along with Democratic and Republican appointees from the House and Senate. Wolf and the lawmakers said the task force will collaborate on ways to speed up delivery.

"We need to do a better job in Pennsylvania. That is not mystery. That’s not something that I am at all reluctant to acknowledge," Wolf said at a media briefing Tuesday, while also stressing that Pennsylvania, like every other state, needs more vaccine.

Pennsylvania ranks 41st among states in the number of shots given per 100,000 people, according to the latest data from the U.S. Centers for Disease Control and Prevention, and 46th in the percentage of allocated vaccine doses that have been administered.

The state Health Department says CDC statistics are misleading in part because Pennsylvania is holding back second doses, whereas other states are pushing them all out at once.

In other coronavirus related developments in Pennsylvania:

The state Health Department on Tuesday unveiled a new eligibility tool on its website, called "Your Turn."

The brief survey asks for age, occupation, place of residence and medical history — and then, depending on the answers, says "It’s not your turn yet" or "It’s your turn!" For those not yet eligible to receive the vaccine, the tool provides the option of registering to be notified when it’s their time.

What the tool is not, though, is a centralized system that would help people schedule COVID-19 vaccine appointments. Some health executives and lawmakers are advocating a centralized registry as a way to manage the mad scramble for shots that has eligible residents signing up with multiple providers.

"I think it would make this process significantly easier for folks if they had one place to go to get on the list and then somebody would reach out to them," state Rep. Austin Davis, D-Allegheny, told administration officials at a hearing Monday. "It’s not going to work any other way. It’s creating too much chaos and confusion among people."

The Wolf administration has resisted setting up such a system, saying it would do nothing to increase supply.

Hank Flynn has the details regarding Philadelphia school teachers protesting across the city over plans to return them to, what they say, are unsafe conditions.

The Wolf administration rejected Pittsburgh Mayor Bill Peduto’s call for teachers to be vaccinated immediately, saying Pennsylvania is adhering to federal recommendations in prioritizing older people and those with serious medical conditions.

Peduto said in a letter to Wolf, a fellow Democrat, that virtual learning has worsened academic disparities, especially for minority students, and that rapidly vaccinating teachers would help speed a return to brick-and-mortar instruction. The Wolf administration responded that it is following CDC guidance in directing the vaccine to people who are "most vulnerable to serious illness."

"We would encourage Mayor Peduto to direct his advocacy on this issue to the federal government if he believes the phased rollout should be changed," said Health Department spokesperson Maggi Barton.

In Philadelphia, Mayor Jim Kenney expressed hope Tuesday that "we’ll have a great end to the school year" as the city awaits a mediator’s ruling on whether Philadelphia teachers must return to their classrooms despite safety concerns. 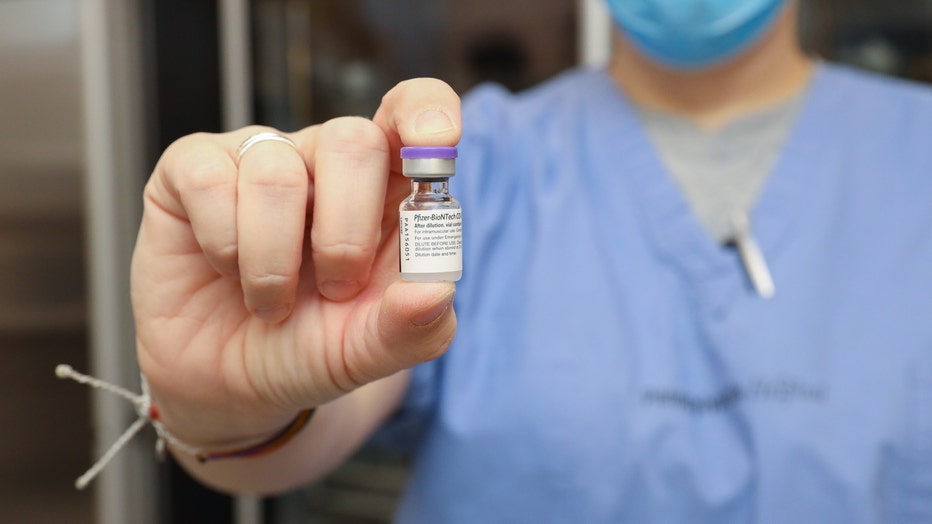 The district plans to resume some in-person instruction later this month. Philadelphia public schools have been fully remote since last March.

The city’s health commissioner, Dr. Thomas Farley, said there has been little transmission of the virus within schools. He said teachers do not need to be vaccinated in order for schools to reopen safely, echoing recent comments by the CDC director, Dr. Rochelle Walensky, who said data show that social distancing and wearing a mask limit spread within schools.

"If we wait until every teacher is vaccinated to open up schools, get kids back, we may miss the entire school year," Farley said Tuesday.

Dr. Farley says the city will be breaking new ground in their effort to allow restaurants to serve more customers.

Philadelphia officials announced they will allow restaurants with proper ventilation to apply to increase indoor dining capacity to 50%, up from 25%.

Health officials said the application will ask for details of heating and ventilation systems, and that it will scrutinize those systems during routine inspections or during inspections triggered by complaints.