Philadelphia are no longer able to provide single-use plastic bags to customers as the city looks to reduce litter.

PHILADELPHIA - In an effort to crackdown on litter and help the environment, retailers in Philadelphia are no longer able to provide single-use plastic bags to customers.

The ordinance that was passed back in 2019 was put on hold during the pandemic but now goes into effect October 1st. It means you will have to bring or buy your own bag for that weekly shopping trip to ACME lunch run to Wawa.

"I think it’s a good idea. Anytime we can cut down on the plastics that get into the streets and littering up places is a good thing" said Marisa Riverso of South Philadelphia who already uses reusable bags during her shopping trips.

Paper bags will still be allowed but only if it’s contains at least 40-percent recycled material.

The "reusable" is already becoming the must-have shoulder accessory when shopping in Philly. 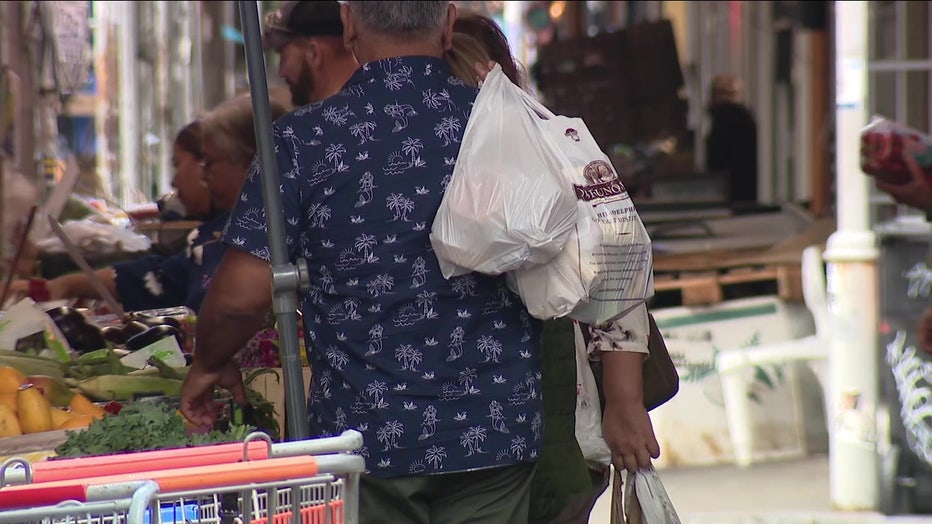 At the Italian Market the single use plastic bag is almost as much of a staple than the fresh vegetables themselves.

Stores are putting up signs to warn customers of the change and some are selling their own reusable bags. Store owners admit it’s going to take some getting use to.

"We’re telling people to bring their own bag because we can’t use the plastic. Some people don’t like it," said Keidra Goldsmith, a clerk at food store South Philadelphia.

Officials say Philadelphians use a staggering 1 billion plastic bags each year, many end up clogging up city streets, parks and waterways.

"Might as well start getting the reusable ones now. It will be better for the environment" said Catherine Peguro of Oxford Circle.

The City will start giving warnings to retailers who do not comply.  In April of 2022 is when stores could face a $75 fine for still using the illegal bags.