PHILADELPHIA - Philadelphia Police Commissioner Richard Ross resigned Tuesday amid allegations that members of his department engaged in sexual harassment and racial and gender discrimination against two women serving in the ranks.

Mayor Jim Kenney said in a news release he was disappointed to lose Commissioner Richard Ross Jr., but in light of the new allegations, he said Ross' "resignation is in the best interest of the department."

Kenney spokeswoman Deana Gamble said Ross offered his resignation after Kenney learned details of the allegations by the women, including one who says she once had an affair with Ross.

The corporal and patrol officer made the allegations against several department employees. Gamble said Ross knew about the alleged harassment and failed to respond adequately. 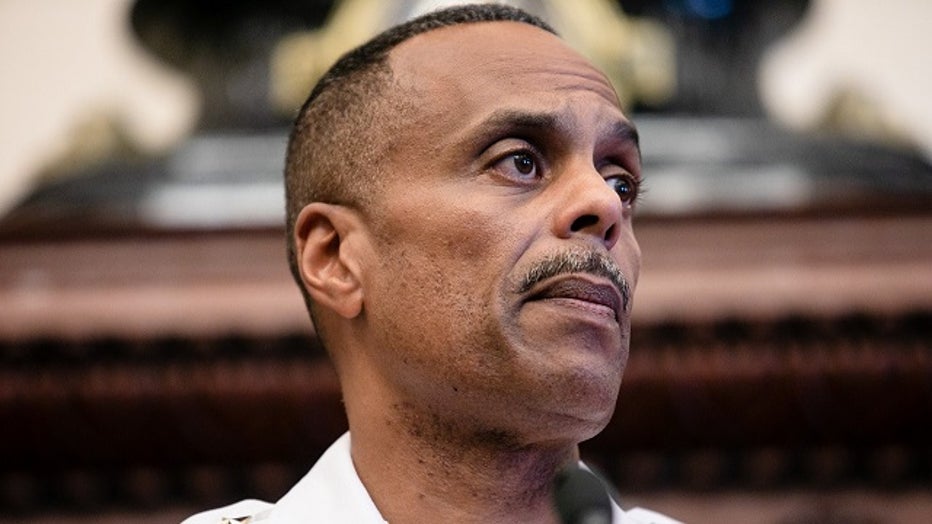 Photo courtesy of the Office of Gov. Tom Wolf

An amended version of the women's federal lawsuit was filed Monday.

"The mayor wanted to figure out what occurred," Gamble said. "After he read the complaint, the mayor decided to accept his resignation."

The lawsuit alleges discrimination, a hostile work environment, retaliation and other counts. It says the women "have suffered continuous and ongoing sexual harassment and discrimination by both co-workers and supervisors," including groping, sexual comments and sexual advances, and that they faced retaliation for complaining about it.

The lawsuit, in which Ross and the city are among the defendants, was filed by a corporal and an officer, one black, the other black Hispanic. It claimed Ross had had a two-year relationship with one of the women, an affair that ended in 2011.

The women's civil lawyer, Ian Bryson, said they had not expected Ross to resign.

"If that's what it takes to shed light on this issue, then we see it as a win for working people," Bryson said.

The lawsuit said when one of the women told Ross she had been subjected to sexual harassment and a hostile work environment, he responded brusquely.

"Commissioner Ross declined to act on her report, and instead suggested, `So why don't you just order his dumb ass to go sit down and get out of your face officer,"' the lawsuit alleged.

Kenney noted a sexual harassment prevention policy and efforts to prevent workplace discrimination and harassment were implemented a year ago.

"While rolling out a new policy understandably takes time, I do not believe the Police Department has taken the necessary actions to address the underlying cultural issues that too often negatively impact women -- especially women of color," Kenney said in a statement.

The mayor said an unspecified independent entity will investigate the recent allegations and recommend how to address discrimination and harassment within the police agency.

Asked if the city has taken any personnel action related to the lawsuit and Ross' departure, Gamble responded that an internal investigation is currently underway.

The city police have had a checkered relationship with the people they serve, and this summer about 100 people protested outside police headquarters, demanding action in response to reports some officers had made racist and violent social media posts.

Ross said the day he took the job that it was a "challenging time for law enforcement" and acknowledged the department had "some issues."

Ross has been with the Philadelphia Police Department since 1989 and was appointed police commissioner in January 2016. Ross served in a number of roles, working in Patrol, Special Operations, Detective Bureau, Homicide and Internal Affairs.

As of now, Christine M. Coulter will act as commissioner for the Philadelphia Police Department, officials confirmed.

Ross’ resignation is effective immediately. Ross didn't immediately return a call seeking comment from FOX 29. News of the resignation comes less than a week after a police shooting and 8-hour standoff in North Philadelphia.

"It's sad, you hate to see a friend leave a position of such intense leadership, such an important spot for the City of Philadelphia," SEPTA Police Chief Thomas Nestel said. "He's a good man, a good police commissioner, a great leader somebody you admire and respect."

The FOP released the following statement:

"We are saddened to learn of Commissioner Ross's sudden resignation.  Commissioner Ross has served the rank and file officers and the residents of this city with honor and respect over his three-decade tenure with the department," FOP Lodge #5 President John McNesby said.

He added, "The commissioner has served in every rank of the department and is a shining example that hard work and dedication can lead you to the top of your profession.  We will miss his passion and guidance for this great police department."