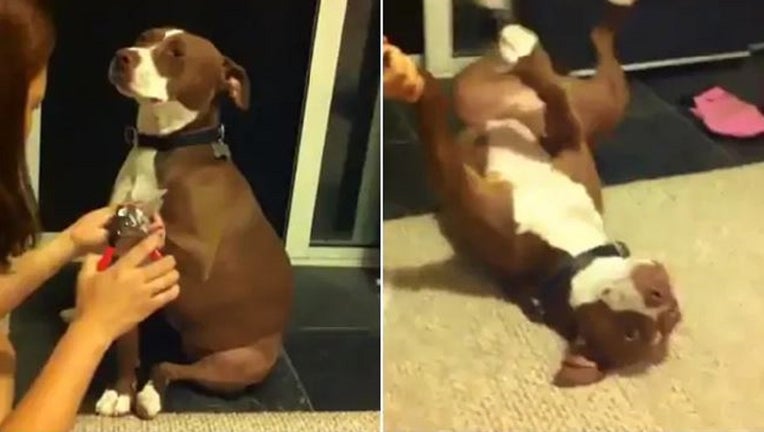 An anonymous pit bull has been crowned the world’s “most dramatic” dog after it seemingly pretended to faint when their owner attempted to clip their nails.

An anonymous pit bull has been crowned the world’s “most dramatic” dog after it seemingly pretended to faint when its owner attempted to clip its nails.

Footage of the funny incident first began making the rounds on social media last week, and has since amassed millions of views across Twitter and photo sharing site Imgur. The clip was also shared to Reddit — in a thread titled, "The world’s most dramatic pit bull" — where users commended the doggo’s performance.

“This is adorable! Give him all the scratches!” another said.

“I actually laughed out loud at work,” someone else admitted.

Several other dog owners also took the opportunity to share their own pet-grooming stories — most of which ended much more poorly than the viral performance above.

“My dog ‘dies’ when I go to brush his teeth. He will let me do it, but I literally have to hold his head the whole time,” one Redditor wrote.

“Our beagle has to be restrained and howls like he’s been shot before we even touch him,” another added on Twitter, complete with video evidence.

All of those reactions, however, pale in comparison to the horrors that allegedly await one Reddit user who was cursed with perhaps the crankiest pooch of them all: “My dog spraypoops anyone who tries to cut her nails,” the dog-owner simply wrote.

Suddenly, fake-fainting doesn’t sound so dramatic after all.