The police department obtained surveillance video showing a woman matching a description of the ice cream licker around 11 p.m. on June 28 at a Walmart store in East Texas.

LUFKIN, Texas - Authorities say a viral video of a woman licking a container of Blue Bell ice cream and putting it back on a store shelf happened at a Walmart in East Texas — and investigators believe they have identified the alleged culprit.

The nine-second video, posted Saturday on Twitter, has been viewed more than 11 million times. It shows the woman licking a half-gallon of Blue Bell's “Tin Roof” flavor, then re-sealing the ice cream and returning it to a freezer. The woman then laughs and walks away.

Blue Bell said Monday it was working with “law enforcement, retail partners and social media platforms” in connection with the incident.

Commenters on social media identified the woman in the video as being from San Antonio, police said. Law enforcement began searching area Walmart stores but could not find a store display case matching the one in the video.

The investigation then turned to Houston-area Walmart stores after investigators learned the woman might be living with a boyfriend in that area — but again, a matching display case could not be found.

On Wednesday, Blue Bell instructed all of its division managers to see if they could identify the store location, according to police.

“Within an hour of the corporate plea, a Lufkin division manager called, saying he believed it was Lufkin Walmart. He based this on the store’s unique merchandising which matched the video,” the Lufkin Police Department stated. 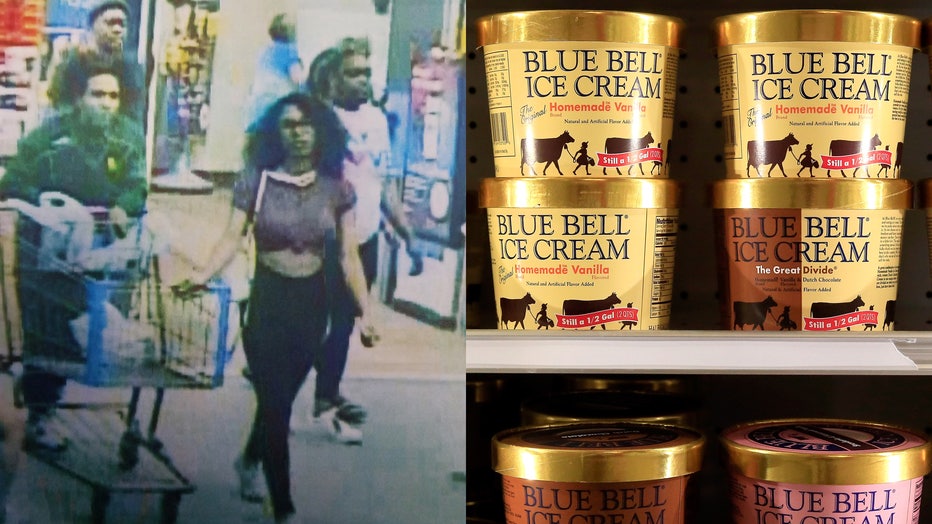 A woman matching the description of the suspect in the viral video is seen on surveillance video at a Walmart store in Lufkin, Texas, alongside a file image of Blue Bell Ice Cream. (Photo credit: Lufkin Police Dept. & Jamie Squire/Getty Images)

Blue Bell officials contacted police Wednesday afternoon with the new information and said they had found what they believed to be the “compromised” ice cream container at the Lufkin store, located about 120 miles northeast of Houston.

The police department also obtained surveillance video showing a woman matching a description of the ice cream licker around 11 p.m. on June 28 at the Lufkin Walmart store.

Police said the investigation was ongoing, but detectives believe they have identified the woman.

Authorities said the appropriate charges will be filed.

“Based on security footage, the location and the inspection of the carton, we believe we may have recovered the half gallon that was tampered with,” Blue Bell said in a statement Wednesday.

Blue Bell said it removed all Tin Roof half gallons from that location “out of an abundance of caution.”

“Food tampering is not a joke, and we will not tolerate tampering with our products,” the statement continued. “We are grateful to the customers who alerted us and provided us with information.”