Surveillance footage obtained by FOX 29 shows the shooter on a green dirt bike firing multiple shots into this sedan all of it possibly stemming from a road rage incident.

WEST PHILADELPHIA - Police say an altercation between a person on a dirt bike and the driver of a car could have lead to a deadly shooting outside a corner store Thursday evening in West Philadelphia.

According to investigators, the driver of a Chevy Impala parked near a corner store on 52nd and Girard around 6:30 p.m. As his friend was inside the store, police say someone on a dirt bike pulled up next to the Impala and fired at least six shots.

The victim, a 37-year-old man, was struck twice in the head, police said. He was taken to Penn Presbyterian Hospital where he died shortly before 7 p.m.

The passenger told police that the car had been involved in an altercation with a group of dirt bike riders. Police suspect one of the bikers followed the car on 52nd Street and later opened fire. 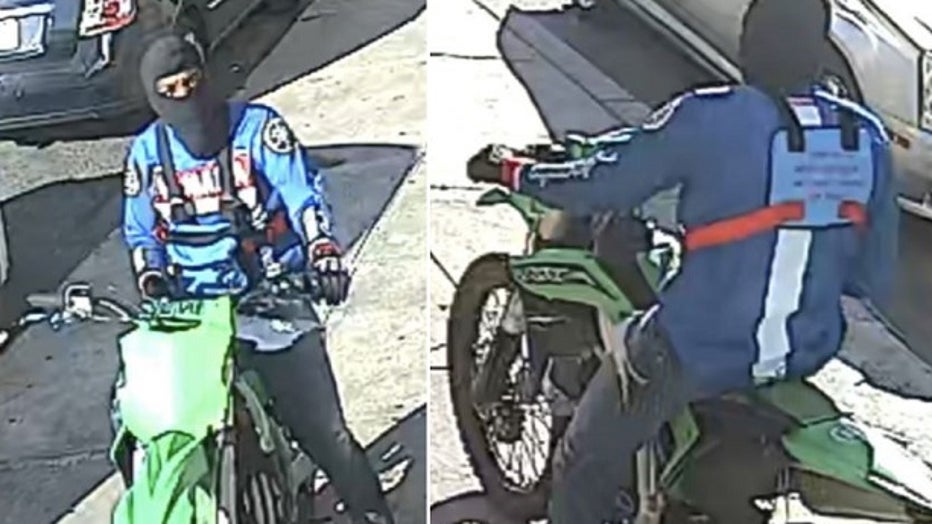 Police released images of the person they are looking for in connection with the murder. (Philadelphia Police Department)

The suspect is described as a Black male of a thin build, who was wearing a blue and white Troy Lee Designs GP Yamaha Jersey long sleeve shirt with graphic patches on the sleeves, blue jeans, white sneakers and a black full-face mask.