WASHINGTON, D.C. - For only the second time in 19 years, fewer than half of U.S. adults report feeling extremely proud to be Americans, and politics and health care are largely to blame, according to a new poll from Gallup.

Gallup has been polling Americans about their patriotism since 2001, and the most recent poll revealed that, while 70 percent of U.S. adults are proud to be Americans, only 45 percent of them feel "extremely" proud. This is down from 47 percent last year.

The highest levels of American patriotism recorded by Gallup occurred between 2002-2004, which was due to a surge in patriotic sentiments immediately after the September 11 terrorist attacks as the American public unified in the recovery process and rallied around the government.

Since 2005, however, fewer than 60 percent of Americans have expressed extreme pride in their country.

The June Gallup poll included a new question to provide more insight into what exactly makes Americans feel pride for their country and what doesn’t. Presented with eight aspects of U.S. government and society, poll participants were asked whether each one made them feel proud of their country or not.

The majority of Americans polled expressed pride in six out of the eight categories: scientific achievements (91 percent), the U.S. military (89 percent), culture and arts (85 percent), economic (75 percent) and sporting (73 percent) achievements, and diversity in race, ethnic background and religion (72 percent). 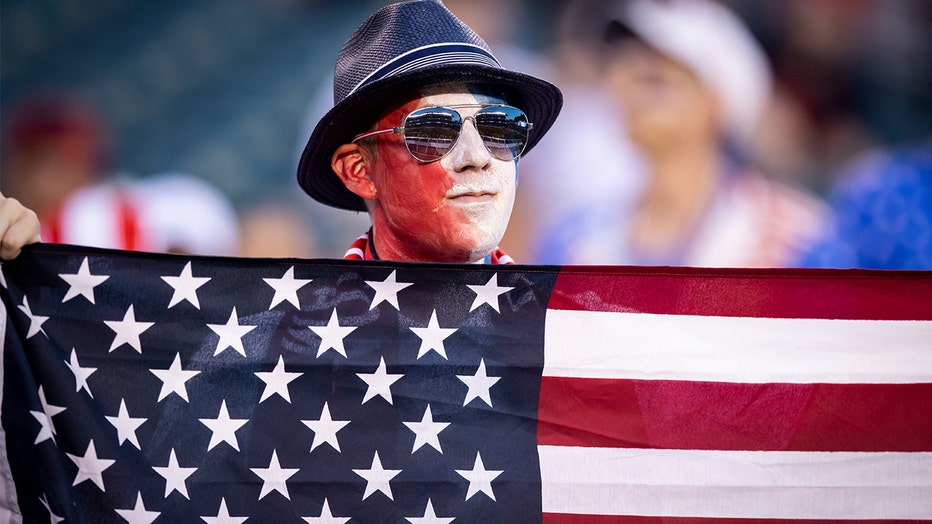 FILE: A fan with a face painted Red, White and Blue holds up the stars and stripes during the CONCACAF GOLD CUP Quarterfinal match of USA v Curacao at Lincoln Financial Field in Philadelphia, PA. (Ira L. Black/Corbis / Getty Images)

Political party affiliation had an effect on reported patriotism levels, but that has been the case since Gallup stated polling Americans on the matter in 2001 and is to be expected.

"Gallup measures show substantial partisan fluctuation depending on which party controls the White House,” a 2005 report stated, “For instance, satisfaction with the state of the nation was higher among Democrats during the Clinton years, while it has been higher among Republicans since Bush took over in 2001."

Though Republican patriotism dips a little bit in response to who is in office, their extreme pride remains more consistently high.

"Even when Barack Obama was in office, Republicans' extreme pride never fell below 68%," Gallup reported.

The low levels of extreme patriotism this year were driven significantly by Democrats; only 22 percent feel extreme pride right now. That’s half of what it was in the months before Donald Trump won the presidency in 2016, and it is the lowest “extreme” Democratic pride has been in 19 years.

Feelings of pride in women, liberals and younger adults — all subgroups that have a tendency to identify as Democrats — reported lower levels of extreme pride than men, conservatives and older adults.

Gallup theorized that declining patriotism may also be affected by recent international opinions of U.S. government leadership, which took a sharp downward turn between 2016-2017. During this period, U.S. leadership ratings in 65 countries dropped by a minimum of 10 percentage points.