Ever since announcing its new one, Popeyes has reportedly been selling out of it. Reports are coming in from across the nation of long lines and restaurants exhausting their supply.

The new sandwich keeps the formula simple: a buttermilk-battered and hand-breaded chicken filet on a toasted brioche bun, topped with pickles and either mayo or spicy Cajun spread.

If you think it sounds delicious, well, you've got lots of company; fans have been lining up to score one of the new sandwiches.

Rapper Quavo, from the group Migos, jokingly posted a video to Instagram claiming that he was selling the in-demand sandwiches for $1,000 each. He shows a bag of them in the trunk of his car.

More officially, Popeyes saw traffic to its restaurants spike by 103.3 percent on Wednesday, just over a week after the sandwich launched, Yahoo Finance reports.

Jose Cil, CEO of Restaurant Brands (which owns Popeyes), told Yahoo Finance, “You can do all the social media buzz that you want, but if you don’t have a great-tasting product, people won’t react the way that they have.”

He added, “We didn’t expect this type of reaction.” 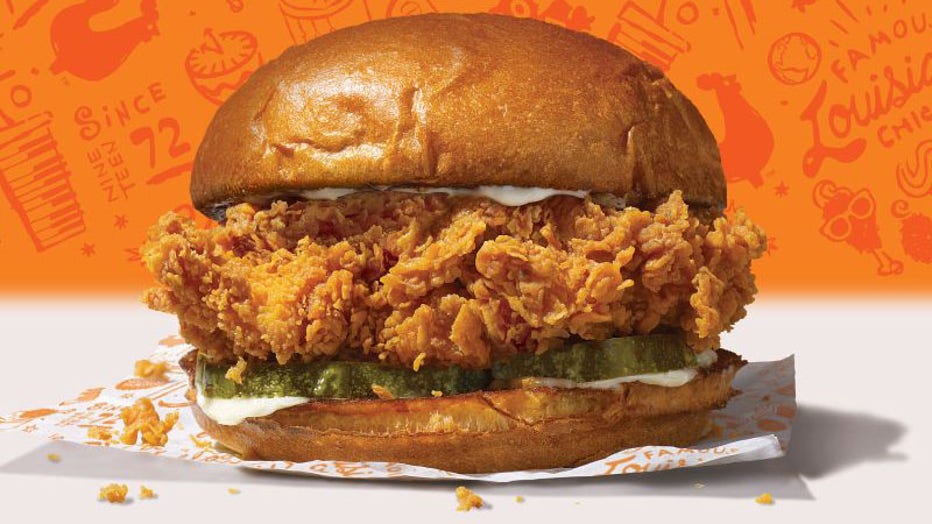 Popeyes' new chicken sandwich is shown in a promotional photo, featuring a buttermilk-battered and hand-breaded chicken filet on a toasted brioche bun, topped with pickles and either mayo or spicy Cajun spread. (Photo credit: Popeyes)

The success of the new item hasn’t gone unnoticed by other brands. Chick-fil-A tweetedout a message seemingly directed at Popeyes, saying, “Bun + Chicken + Pickles = all the (love) for the original.”

Another competitor, Wendy’s, offered this on Twitter, along with a pic of its own sandwich: "Y’all out here fighting about which of these fools has the second-best chicken sandwich.”

Even McDonald’s appears to be feeling the pressure. Blake Casper, the leader of a coalition of McDonald’s franchises, released a memo to members insinuating that the company would be responding to the popularity of Popeyes’ new sandwich, Nation’s Restaurant News reports. It’s unclear if this means a new sandwich is on the way, courtesy of the Golden Arches, or if the chain just plans a promotional push for the sandwiches it already serves.

When Fox News reached out to Popeyes for a comment about the response to the new sandwich, the company did not immediately send over a statement, stating that things were “a bit crazy” at the moment.

Get updates to this story on Fox News.com.