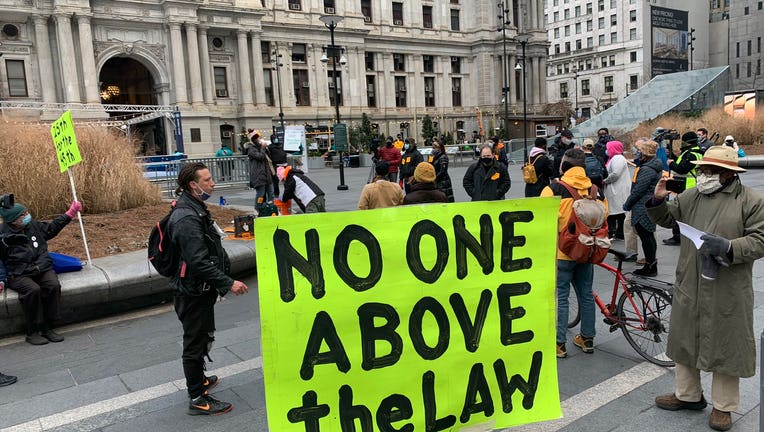 A small group of protesters gathered outside City Hall on Saturday to call for President Donald Trump's removal from office.

PHILADELPHIA - A small group of protesters gathered outside City Hall in Philadelphia on Saturday to demand President Donald Trump be removed from office following the pro-Trump insurrection at the Capitol.

With less than two weeks remaining in Trump's presidential term, organizers with the "Refuse Fascism Rally" believe that "[Trump] and his followers present a real and present danger to humanity."

Organizers have accused the Trump administration and his base of white supremacy, xenophobia and undermining the truth. In a statement, they called for a "public show of revulsion against Trump and a repudiation of his regime’s fascist program."

"In calling for this seditious act, the president has committed an unspeakable assault on our nation and our people. I join the Senate Democratic leader in calling on the vice president to remove this president by immediately evoking the 25th Amendment," Pelosi said.

On Saturday, President-elect Joe Biden called Trump "unfit for the job," but repeatedly refused to endorse growing Democratic calls to impeach him a second time.

"I’ve been saying for now, well, over a year, he’s not fit to serve," Biden said. "He’s one of the most incompetent presidents in the history of the United States of America."

But he refused to back efforts to remove Trump from the White House and insisted that impeachment was up to Congress. Instead, Biden said he was focused on the start of his own administration on Jan. 20, and he said his top three priorities are beating back the coronavirus, distributing vaccines fairly and equitably, and reviving the struggling economy.