Parents and teachers turned out for a rally Wednesday voicing their frustrations over asbestos in Philadelphia schools. FOX 29's Jeff Cole reports.

PHILADELPHIA - The Fund our Facilities Coalition held a rally Wednesday to voice their frustrations regarding school closures in Philadelphia over asbestos.

A hand-scrawled closed sign at Philadelphia’s Carnell Elementary tells the story of this school and five other city schools shuttered by the threat of asbestos.

Rishawn Reynolds’ home is now the classroom for her fourth-grade daughter.

"Tiffany is at home. I am creating the lesson plans for her doing the best that I can to make sure she is still learning," she said. 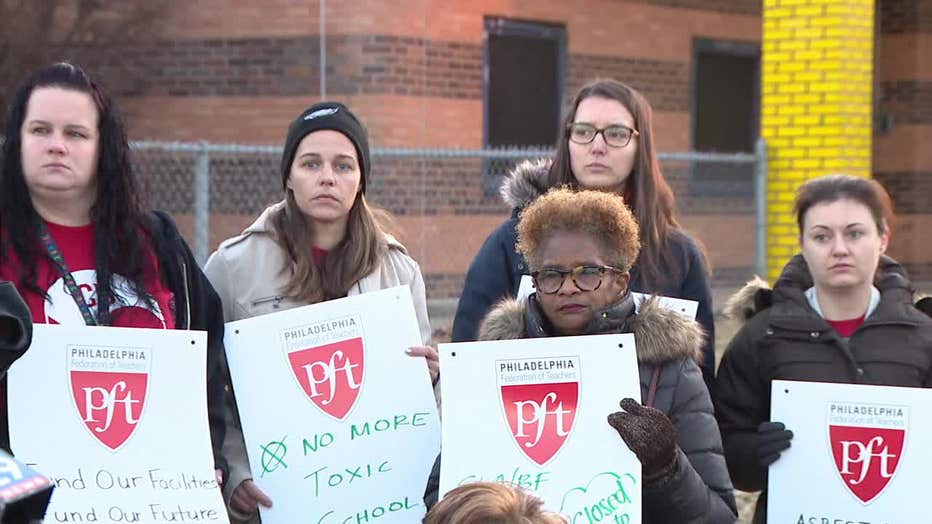 Dozens of people turned out for a rally Wednesday voicing their frustrations over asbestos in Philadelphia schools.

The crisis of potentially cancer-causing asbestos in aging classrooms has disrupted the school year and appeared to overwhelm the school district—forcing students out of their schools, angering parents.

"The School District can call DHS on us but who will call on them for poisoning our children on a daily basis. Letting them breathe in all the chemicals and when are they going to clean our schools," parent Stephanie Marrero said.

A group of politicians, union leaders, parents and teachers has formed the Fund our Facilities Coalition. They rallied in front of Carnell Wednesday morning and met in a closed-door meeting at the district building. They're calling the district’s approach to the asbestos crisis “in some cases negligent." The group is also demanding Governor Wolf kick in $170 million to fix the schools.

"This morning's gathering was another important step in ensuring that facilities funding is prioritized in this year's state budget, and we will continue to work tirelessly to ensure that this crisis is at the forefront of everyone's conscience," said PFT President Jerry T. Jordan. "I am proud that so many PFT members, parents, and our elected allies are continuing to partner with us in this critical advocacy work. Our message is clear: the Governor's budget address must include significant funding to address this ongoing crisis."

The Office of Gov. Tom Wolf released the following statement:

"Governor Wolf believes that no parent should have to worry about the health risk of sending their child to school. The safety of our children should always be a priority and our schools must be healthy environments where students and teachers can focus on learning and building bright futures.

Over the past two years the governor has visited Philadelphia schools to see the environmental issues firsthand and provided nearly $12 million to address lead paint and fund repairs. That investment in state funding has resulted in improvements at dozens of schools that serve thousands of students.

The governor agrees that more funding is needed to protect the health of students and teachers. He continues to urge the legislature to pass his Restore Pennsylvania proposal to generate $4.5 billion in infrastructure funding over four years. With that funding, Pennsylvania could spend tens of millions more to remediate lead and other contaminants in schools."