The findings of the survey revealed that white wine drinkers are more likely to be night owls and extroverts, as well as more likely to listen to punk music.

(Fox News) - If you like “Game of Thrones,” consider yourself an introvert, and enjoy traveling, results found you’re probably into red wine.

Conducted in advance of National Wine Day on May 25, the survey of 2,000 Americans (aged 21-plus) looked at the differences in personality traits between those who drink red wine to those who prefer white.

Red wine drinkers were also more likely to identify as early birds, listen to jazz, and consider themselves to be “wine aficionados” (45 percent vs. 31 percent).

In addition to looking at the differences in personality, the survey also examined each groups’ knowledge when it came to drinking wine, as well as hosting and attending events.

It found that red wine drinkers had the knowledge to back up their claim of “wine aficionado” — they were more likely to know how to correctly hold a wine glass (73 percent vs. 65 percent), know what “tannins” are (53 percent vs. 45 percent) and know how long it takes for wine to oxidize (64 percent vs. 54 percent).

They were also more likely to consider it a turn-off if a date wasn’t knowledgeable about wine (46 percent vs. 40 percent), and were willing to spend slightly more on wine — averaging $40 a bottle. 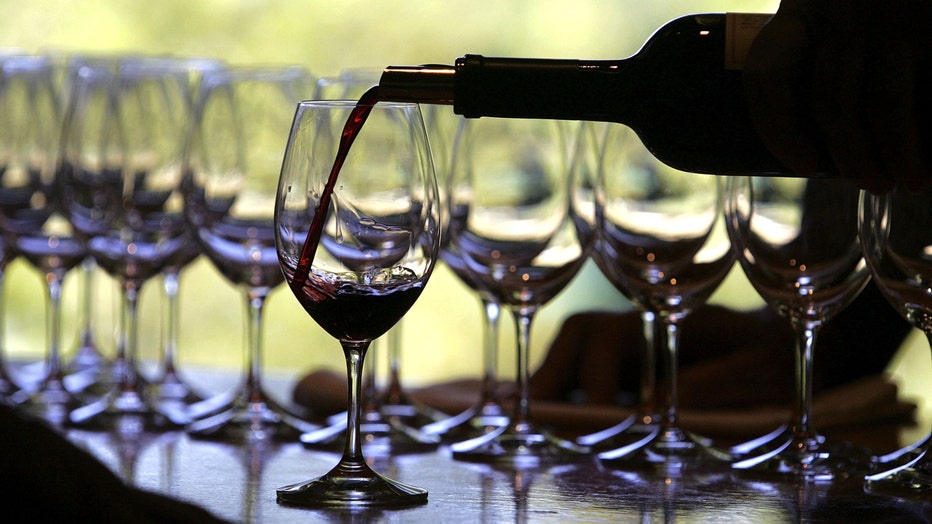 The survey found that red wine drinkers were more likely to identify as early birds, be introverted, and be a dog lover as opposed to a cat lover. (File photo by Justin Sullivan/Getty Images)

The average respondent, in any group, drinks four glasses of wine per week, and the favorite place to drink — regardless of wine preference — was found to be at home (72 percent). But 62 percent will forego drinking a glass of wine after work or with dinner, because they don’t want to open a new bottle.

In addition to drinking in the comfort of their own home, the survey found that 49 percent of respondents enjoy drinking wine at events or gatherings, preferred over drinking at a bar (43 percent).

And, while at an event, three-quarters will drink what everyone else is drinking, even if they’d prefer something else. (After hosting an event, people admit to throwing out an average of three partially-full bottles of wine.)

Americans do try to stop the waste, though: The average respondent finishes three bottles of wine a month to stop them from going to waste, but throws out two partially-full bottles that have gone bad.

“Enjoying a glass of whatever wine someone is in the mood for, doesn’t need to be wasteful. There are more amazing wines available now than ever before. Wine lovers should be able to enjoy the wine they love, in the amount they want, without thinking about when they are going to return to that bottle,” said Greg Lambrecht, founder and inventor of Coravin, a wine-preservation system.

People who prefer red wine are more likely to:

-Be a “wine aficionado"
-Be an early bird
-Be introverted
-Be a dog-lover, as opposed to a cat lover
-Be fans of jazz music
-Describe themselves as adventurous, humble and organized
-Spend slightly more per bottle ($40)

People who prefer white wine are more likely to:

-Be a night owl
-Be extroverted
-Prefer cats to dogs
-Listen to jazz music
-Identify themselves as curious, sarcastic and perfectionists
-Spend slightly less per bottle ($37)