The Gardens at Mill Fleurs

It's a tale of terrifying poison ivy and bamboo transformed into an oasis near the Delaware River, one couple builds a vision of light and color in an almost impossible setting.

POINT PLEASANT, Pa. - Whether you casually plant spring bulbs or chrysanthemums in the autumn to beautify your yard, or make a passionate study of the wide variety of vegetables, herbs and flowers, and then pursue the vision, most can agree efforts made to spruce up the home no matter how large or small, bring a great deal of beauty to any neighborhood.

On a much grander scale, one couple in Bucks County turned their seemingly impossible property into a positively incredible vision of color. And, you can see their vision for yourself.

Driving through Bucks County, you might not know of The Gardens of Mill Fleurs, but as you pull into the drive, you are at once surrounded by an intense vision color. 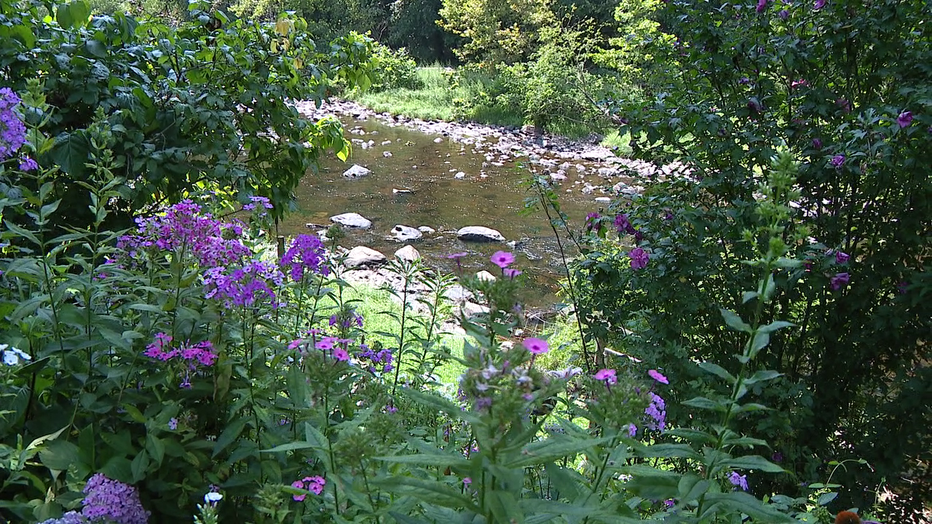 The Gardens at Mill Fleurs

"When the sun starts to go down, the yellow – the back part of the garden is like – did I die and go to heaven? What is this? Cause the light comes through and everything is back lit and the things glow in a way that’s ethereal. It’s just amazing," co-owner Barbara Tiffany described her ornamental garden.

Barbara Tiffany and her husband, Robert, co-own the unique setting. They created an astounding oasis, tucked away on the Tohickon Creek, in Point Pleasant, in Bucks County, near the Delaware River, about an hour outside of Philadelphia.

"It was absolutely treeless and plantless by the time we got the bamboo out of here. There was nothing here. The sycamores were here," Barbara reminisced.

What started as a sanctuary for artisans and friends became a passion and a way of life for the couple. They now show their ever-evolving ornamental garden to the general public.

"My husband and I were getting married and this was a bed and breakfast. It was called Innisfree and it was the only place where we could put people up for one night. We put up our friends here and it was rustic. It was pretty rustic. Tiff just lusted after this property and I didn’t want it at all. It’s 10,500 square feet of space and I said, ‘What do two people who are corporate need that much space for?’ You know, our children were grown and out," Barbara explained. "It kept coming on the market and we kept looking at it and I said things like, ‘Over my dead body."

But, the heart wants what it wants and Robert Tiffany quietly, patiently and persistently set his heart on the property.

"We were artists in residence in 1993 at a ranch overlooking the back of the Yosemite range. And, I was in la la land because I had never been an artist in residence before and this was like, ‘Oh my God.’ And, I was tripping down through the mountainside, through the lupines and wildflowers. And, Tiff said to me, ‘Oh the mill is on the market again.’ And, I said, ‘Well maybe we could do there what they’re doing here?’ Which, what I meant by that was bringing people in to do creative work, because what else are you going to do with all that space?"

That space became theirs. But, they encountered a good many obstacles as the evolution of the property enfolded. Bamboo, for one. Poison ivy, as well.

"We started with the garden, because of the wall-to-wall bamboo. And, when we finished excavating, to get bamboo out – I speak with authority on this – you, you dig it down three feet and you lift every cubic inch of soil and that’s how you get rid of bamboo," Barbara explained. "In the back of the house, where the colors are warm, that was multi-flora rose, um, poison ivy so old…you know, poison ivy’s a vine and it climbs up trees to support itself. And the tree this particular poison ivy had climbed up had long since disappeared – you could see the stump, it had rotted away. The poison ivy had a trunk this big. Hairy, terrifying and it’s, it was supporting itself on tendrils that was propping it up against the ground. The most terrifying thing I’ve ever seen in my life," Barbara described their early horrors.

They lived simply while their historic mill, dated 1742, was restored into a home they could live in. Once the mill was restored, Barbara set out to fill the property with plants she found interesting.

Then came an opportunity to join the Pennsylvania Horticultural Society, which set them on a new path showing their ever-evolving garden to the public.

"Philadelphia, the great gardens around Philadelphia, started to market itself as the garden capital of the world and, in fact, it is. There are over 35 public gardens that are within about 35 miles of Philadelphia and it’s very rich. It’s very interesting. You know, as a member of the public, I thought so. But, I don’t know, I guess somebody asked me if I’d like to join the consortium and I said, ‘Are you kidding? Yeah, where do I sign?’ It’s an extraordinary effort. It’s very thoughtful. It’s very caring. And, each garden does what it does. They just ask ‘What do you want? What do you want us to do to support you?’ It’s a marvelous group."

Barbara has a simple philosophy for what she chooses to grow.

"Everybody should plant what they want to plant. I believe that if the planet can be saved, it will be diversity that will save it. I have lots of natives, lots of what are called natives. I have lots of plants that have come from other countries in the same latitude. Or not. I experiment a lot."

The garden is spacious and diverse and the hosts are warm, knowledgeable and friendly. The garden itself has year-round beauty and interest. The bucolic setting invites peace. This is a must see, with so much to offer. Find yourself inspired by The Gardens of Mill Fleurs.

More information on Philadelphia-area garden trips can be found at visitPA.com.