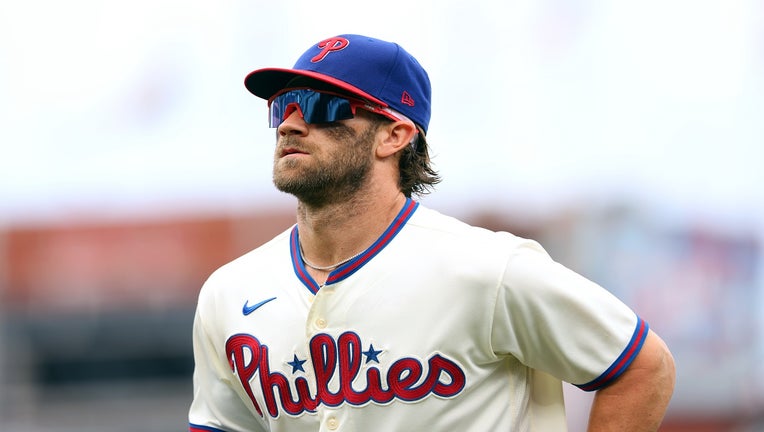 PHILADELPHIA, PA - AUGUST 29: Bryce Harper #3 of the Philadelphia Phillies in action against the Arizona Diamondbacks during a game at Citizens Bank Park on August 29, 2021 in Philadelphia, Pennsylvania. (Photo by Rich Schultz/Getty Images)

PHILADELPHIA - It’s that time of the baseball year again, the individual award season. Who’s the MVP? Who’s the Cy Young winner? Rookie of the Year?

Does the MVP have to come from a team in the postseason? Does MVP mean "most valuable player to a team" or "best player in the league"? There’s never been a clear-cut answer to these.

I’ve got one clear-cut answer for you: Bryce Harper is THE most valuable player to his team in the National League. He’s the clear-cut MVP if the definition is truly Most VALUABLE Player.

Fernando Tatis Jr., with nearly 40 HRs and 100 RBIs, has had a magnificent year, some would say an MVP-caliber year. But he has support from Manny Machado, who will have 30 HRs and 100 RBIs, and the Padres have all but fallen out postseason contention. The Giants, a nice surprise in the NL, are getting big contributions from Buster Posey, Brandon Crawford and Brandon Belt.

Bryce Harper is an enigma. You either love him or hate him, as they say. He plays every day and he plays hard. He loves pressure and is not afraid to fail, and he puts "it" out there -- "it" meaning he knows he’s the center of attention and enjoys being "the man." Most players don’t have that kind of talent, or don’t want the pressure.

I can sum this all up: He is today’s Pete Rose with power.

From opening day till August 1, Harper would agree he was at best a mediocre player. He still looked much like the player he was in DC, where he couldn’t get away from that "all or nothing" trap. Occasional headlines, but consistent inconsistency. It’s easy to do that these days with the emphasis on the long ball.

He did not make the All-Star team with a .282 average, 15 HRs and 34 RBIs — decent numbers, but far from league leading.

In my opinion, this first-half performance was a combination of nagging injuries, poor hitting mechanics and no sense of urgency. He simply changed his approach to including left field, accepting walks and letting the game come to him.

Then came the big turnaround, when the team was under .500. On Aug. 1, Harper hit three doubles and started the Phillies on an eight-game win streak. He started to play the game, using the opposite field, bunting, aggressive baserunning, hell bent on sparking the team, Citizens Bank Park and grabbing the MVP.

To make matters worse, Rhys Hoskins, his protection in the lineup, was lost for the season. Since August, there have been five different cleanup hitters behind Harper. His at-bats with RISP were seventh on the team, his teammates are getting more chances.

Simply put, what Harper has done is unbelievable. And not just with the bat.

He has walked, stolen a base, scored a run or helped the team with defense. He’s the guy the opposition won’t let beat them, but he finds a way. He sees more left-handed pitchers than any left-handed hitter in history other than Barry Bonds, it seems to me. Imagine, close to 50% lefties and the shift, still .345 since Aug. 1.

Harper and his team have done it the right way in Philly. Branding geniuses have given Harper to the fans as a gift. He plays to the crowd, he wears wild colors, his people know just how to accessorize him and create memorabilia-themed for all occasions. For every Schmidt jersey, there are 10 Harpers.

In the American League, Shohei Ohtani and Vlad Guerrero Jr. have separated themselves from the pack. Ohtani has had a year unlike any in history, 9-2 as a starting pitcher and 45 HRs as a hitter.

Vlad Jr., close to 50 HRs and 115 RBIs. The MVP and Player of the Year in whatever order. I like Guerrero Jr as MVP, Ohtani the Player of Year.

The National League MVP is Bryce Harper, who on Aug. 1 put his team on his back, became the best player in the league, and stole it.