Monterey Park shooting: Man who wrestled weapon away from gunman speaks out | LiveNOW from FOX

The mass shooting that left 11 dead amid Lunar New Year celebrations in Monterey Park could have been "much worse" if it hadn't been for the actions of a civilian who disarmed the gunman Brandon Tsay, the man who disarmed the shooting suspect at his family's dance studio, spoke to reporters about his heroic decision to take down the gunman. "He's the hero that disarmed the suspect at the Alhambra location and, in my opinion, saved many of lives," LA County Sheriff said. More LiveNOW from FOX streaming video

MONTEREY PARK, Calif. - Investigators searching for a motive Monday in the worst mass shooting in Los Angeles County history said the gunman was previously arrested for illegally owning a firearm, had a rifle at home, hundreds of rounds of ammunition and appeared to be manufacturing gun silencers.

Los Angeles Sheriff Robert Luna said investigators had not yet established why 72-year-old Huu Can Tran gunned down patrons Saturday night at a ballroom dance hall he was said to frequent in Monterey Park, where tens of thousands attended Lunar New Year festivities earlier that evening.

"What drove a mad man to do this? We don’t know, but we intend to find out," Luna said.

Tran fired 42 rounds at the Star Ballroom Dance Studio, killing 11 people and wounding nine. He then drove to another nearby dance hall where Brandon Tsay, who works at the establishment started by his grandparents, wrestled a modified 9 mm submachine gun-style semi-automatic weapon away from him, Luna said.

Gov. Gavin Newsom, who visited Tsay and his family on Monday, was among those hailing him as a hero. The governor said hero can be an overused term that often loses its gravity, but he directed anyone doubting Tsay's courage to surveillance footage of him fighting with Tran.

An 11th victim has died after a gunman opened fire inside a ballroom dance studio amid Lunar New Year celebrations in Monterey Park before taking his own life following an hours-long manhunt that stretched across Los Angeles County. Los Angeles County Sheriff Robert Luna revealed that authorities found a .308 caliber rifle and numerous electronic devices – like cell phones and computers during their search at the suspect's home. Detectives continue to search for a motive. More LiveNOW from FOX streaming video

"This remarkable young man who without any hesitation — though with moments of fear — took it upon himself to save countless lives," Newsom said. "Who knows how many lives he saved."

Tran fatally shot himself Sunday as officers surrounded the van he was inside. A handgun was recovered from the van, which matched descriptions of the vehicle he used to get away from the dance studio.

Sheriff’s deputies from Los Angeles County searched Tran's home in a gated senior community in the town of Hemet, a little over an hour’s drive from the site of the massacre, Hemet police spokesperson Alan Reyes told The Associated Press.

Luna said his officers found a .308-caliber rifle, an unknown amount of bullets and evidence he was making homemade firearm suppressors that muffle the sound of the weapons.

Tran had visited Hemet police twice this month to report he was the victim of fraud, theft and poisoning by family members a decade or two ago in the LA area, Reyes said. Tran said he would return to the station with documentation but never did.

The mayor of Monterey Park said Tran may have been a regular at the first dance hall that he targeted, and his ex-wife told CNN she had met him there and he offered her free lessons.

The death toll rose to 11 Monday after health officials announced that one of the 10 people wounded had died, the LA County Department of Health Services said.

An 11th victim has died after a gunman opened fire inside a ballroom dance studio amid Lunar New Year celebrations in Monterey Park before taking his own life following an hours-long manhunt that stretched across Los Angeles County. The suspect, identified as 72-year-old Huu Can Tran, died from a self-inflicted gunshot wound at a SWAT scene in Torrance, LA County Sheriff Robert Luna said. No other suspects are being sought. Detectives continue to search for a motive. More LiveNOW from FOX streaming video

All except one of the dead were 60 or older, according to information released Monday by the Los Angeles coroner’s office providing the first identifications.

Nhan's family said in a statement that she was a loving person whose kindness was contagious, and danced frequently at the ballroom.

"It’s what she loved to do. But unfairly, Saturday was her last dance," the family said. "We are starting the Lunar New Year broken. We never imagined her life would end so suddenly."

Authorities have shared little about Tran, who once owned a trucking company, according to California business records.

Tran’s Trucking Inc. was based in Monterey Park and licensed with the state from September 2002 through August 2004.

He had a previous arrest for unlawful possession of a firearm in 1990 and otherwise had a limited criminal history, Luna said. The sheriff could not immediately say if gun arrest at a time when firearms laws were different would have barred him from owning weapons.

Los Angeles Superior Court records show Tran was married in 2001 and divorced five years later, citing irreconcilable difference. The couple did not have children, said they had no community property and neither side had to pay alimony. 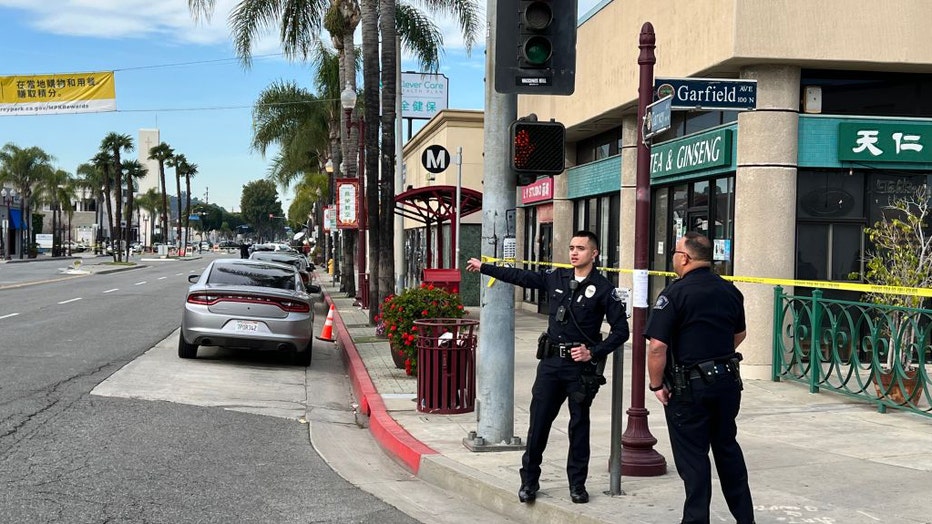 Police officers stand guard near the scene of a deadly shooting on January 21, 2023 in Monterey Park, California. 10 people were killed and 10 more were injured at a dance studio in Monterey Park near a Lunar New Year celebration on Saturday night. (

In the uncontested case, Tran noted in a filing that he could not get away from work to attend any court hearings, though he did not disclose where he worked or what he did.

His ex-wife told CNN that they married soon after they met at the dance hall. While she is named in court papers, she asked not to be identified because of the sensitivity of the case.

She said he would become upset if she missed a step dancing, but was never violent toward her.

Tran eventually moved from the San Gabriel Valley, a melting pot for Asian immigrants, and settled in Hemet, a lower-income community of many retirees 75 miles (120 kilometers) east of Los Angeles in Riverside County.

RELATED: Monterey Park shooting: How to help the victims 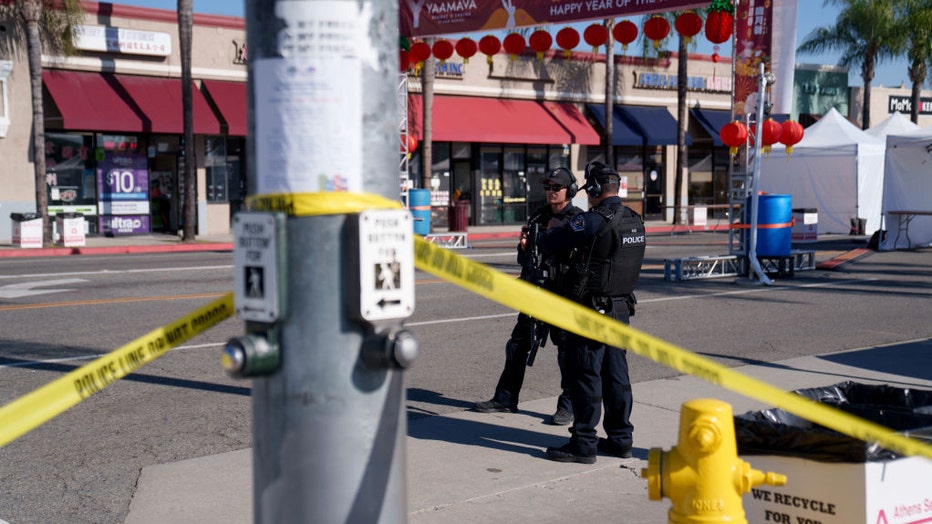 Police officers stand guard near the scene of a deadly shooting on January 22, 2023 in Monterey Park, California. 10 people were killed and 10 more were injured at a dance studio in Monterey Park near a Lunar New Year celebration on Saturday night. (

Tran lived in The Lakes at Hemet West, a gated community off a busy road with a view of snow-covered mountains. The development boasts of amenities including a 9-hole golf course, a shuffleboard court and a dance floor. Properties listed for sale ranged from $45,000 to $222,000.

A neighbor, Pat Roth, told KNBC-TV that Tran said he was a ballroom dance instructor in the past and would sometimes show up to dances at the senior community.

Authorities searched for a motive for the gunman who killed 10 people at a Los Angeles-area ballroom dance club during Lunar New Year celebrations, slayings that sent a wave of fear through Asian American communities and cast a shadow over festivities nationwide. The suspect, 72-year-old Huu Can Tran, was found dead of a self-inflicted gunshot wound Sunday in the van that authorities say he used to flee after attempting to attack a second dance hall. The mayor of Monterey Park said Tran may have frequented the first dance hall that he targeted.

Hemet police had no records of any incidents involving Tran in the community or calls for service at his home, Reyes said.

The shootings during Lunar New Year celebrations sent a wave of fear through Asian American communities and cast a shadow over festivities nationwide.

The massacre was the nation’s fifth mass killing this month, and it struck one of California's largest celebrations of a holiday observed in many Asian cultures, dealing another blow to a community that has been the target of high-profile violence in recent years.

It was also the deadliest attack since May 24, when 21 people were killed in an elementary school in Uvalde, Texas.

Tran is the second-oldest mass killer in the U.S. over the last nearly 20 years according to a database compiled by The Associated Press, USA Today and Northeastern University. The only older mass killer was a 73-year-old who murdered five people in Yuma County Arizona in 2011 before killing himself. The database tracks every mass killing — defined as four dead not including the offender — committed in the U.S. since 2006.

About 20 minutes after the first attack in Monterey Park, Tran entered the Lai Lai Ballroom in the nearby city of Alhambra.

Los Angeles County Sheriff Robert Luna said 72-year-old Huu Can Tran is believed to have been the gunman who opened fire at a Southern California ballroom dance studio Saturday night, killing 10 people and injuring several others. Tran was later found dead inside a white van from a self-inflicted gunshot wound.

Tsay, who was in the lobby, told ABC’s "Good Morning America" that he thought he was going to die.

"Something came over me. I realized I needed to get the weapon away from him, I needed to take this weapon, disarm him or else everybody would have died," Tsay said. "When I got the courage, I lunged at him with both my hands, grabbed the weapon and we had a struggle."

Once Tsay seized the gun, he pointed it at the man and shouted: "Get the hell out of here, I’ll shoot, get away, go!"

The assailant paused, but then headed back to his van, and Tsay called the police, the gun still in his hand.

This story has been corrected to show that Tran had a previous arrest for unlawful possession of a firearm, not a conviction.