A woman rushed at Tevin Biles-Thomas, the brother of Olympic gymnast Simone Biles, after an Ohio judge acquitted him of murder charges on June 15, local media reported.

An Ohio courtroom where the brother of Simone Biles was acquitted in a triple homicide case related to a New Year’s Eve party shooting in 2018 momentarily devolved into chaos Tuesday as the mother of one of the murder victims charged toward him, shouting, "I'm going to kill you."

After Cuyahoga County Common Pleas Court Judge Joan Synenberg issued her ruling that acquitted Tevin Biles-Thomas, a woman in the gallery at the Huntington Convention Center in Cleveland yelled, "You have to be f----ng kidding me" and charged toward the defendant.

"He killed my baby! You know he killed my baby!" the woman continued, as body camera footage released by Cuyahoga County showed her get up from a folding chair and run toward Biles-Thomas. Three sheriff’s deputies tackled the woman before she could reach the defendant.

"We get it, she’s angry. She was led to believe Mr. Biles was guilty, when he wasn’t, and she reacted like a mother. We don’t fault her for that," Joseph Patituce, the defense attorney representing Biles-Thomas, said an interview with Fox 8 Cleveland. 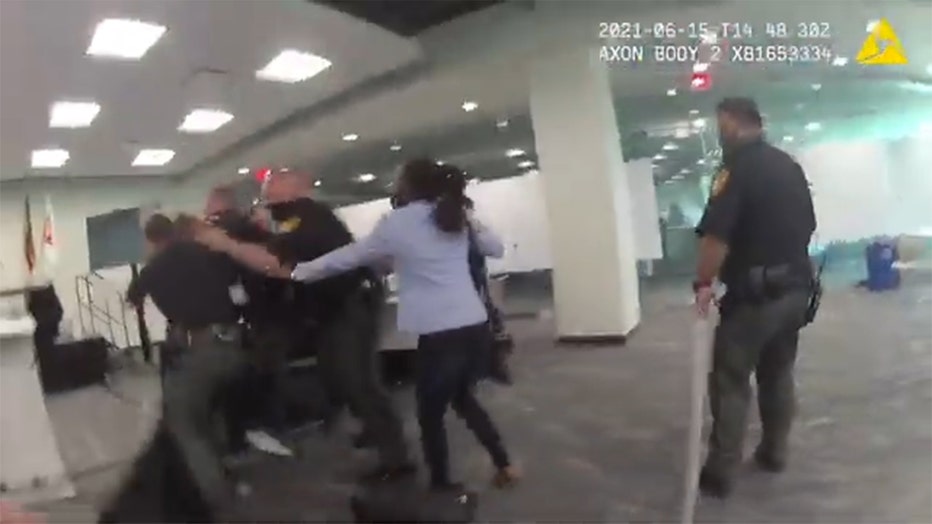 Freeze frame of video showing chaos erupting in an Ohio courtroom after Tevin Biles-Thomas was acquitted for a 2018 triple murder.

Patituce identified the woman as the mother of Delvante Johnson. Authorities have said gunfire broke out when a group of men arrived uninvited to a house party held at an Airbnb in Cleveland on Dec. 31, 2018. Johnson, 19, Toshaun Banks, 21, and Devaughn Gibson, 23, were all killed.

"She lost a son and we understand, and we respect the fact that she has suffered horribly, her family has suffered horribly, just like the other families -- including Mr. Biles," Patituce continued. "I mean, Mr. Biles’ own cousin was murdered in this case and he had to sit there and stand trial with the accusation that he was responsible, murdered his own cousin, which simply wasn’t true."

The woman is not facing criminal charges after the courtroom outburst, Fox 8 reported.

Biles-Thomas, a 26-year-old U.S. Army soldier and brother to Olympic gymnastics champion Simone Biles, was acquitted of multiple counts of murder, voluntary manslaughter and felonious assault after the judge ruled Tuesday that prosecutors did not present evidence to sustain a conviction.

Defense lawyers argued there was no forensic evidence connecting their client to the killings and that no witnesses testified that they saw Biles-Thomas shoot. His first trial ended in a mistrial last month after jurors said they read legal paperwork inadvertently included in evidence given to them to review.

In May, the judge issued arrest warrants for two witnesses who failed to appear to testify during the first trial. Both took the stand later in the day wearing handcuffs, ankle chains and jail uniforms, Cleveland.com reported.

Patituce told jurors Thursday that Biles-Thomas didn't fire any shots and was wearing a jacket of a different color than witnesses described. He also attacked the credibility of a key witness, saying he had gotten "the golden ticket" of leniency in that case and another one after agreeing to implicate the defendant.

Simone Biles has said on Twitter that she was struggling with her brother’s arrest and that her heart ached for the victims and their families.