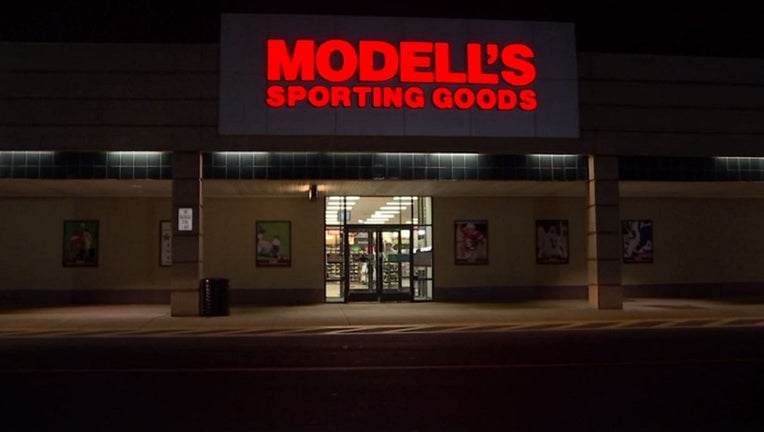 PHILADELPHIA - (FOX BUSINESS) -- Sports retailer Modell’s will be closing 24 stores and is considering offering a minority stake in the company as it fights to stay alive, CEO Mitchell Modell said Friday.

During an interview with FOX Business’ Maria Bartiromo on "Mornings with Maria," Modell said he will do whatever it takes to keep his 130-year-old family business in operation.

Modell described having to announce the store closures to his associates as "one of the most difficult days of my life." Despite the hardship, it's closing the 24 stores in order to preserve the whole company and save the jobs of 4,300 families, Modell said. Of the stores on the chopping block, five are located in New Jersey, eight in New York, four in Pennsylvania and the balance are in either Washington D.C. or New England, the Modell's vice president of marketing told FOX Business.

After assessing the financial situation of the company, Modell hired investment banker RBC to look at strategic alternatives for the company, including selling equity — which Modell had never expected to do.

“[Berkeley Research Group wants] to make sure that we get rid of the unprofitable stores so we have a chain that’s profitable moving forward,” Modell said.

In March 2019, the Wall Street Journal published an article detailing the company’s financial difficulties, which began a chain reaction of vendors stopping shipment of products to Modell’s, insurance companies cutting it off and their credit rating being downgraded, according to Modell.

The article made public the retailer’s hiring of Berkeley as its financial adviser to explore its next steps, which at the time included filing for bankruptcy.

Modell told Bartiromo that Berkeley was, at the time the Journal article was written, hired as a consultant to help the company with its merchandising operations, not for purposes of restructuring.

The CEO hired Berkeley again, this time to as a restructuring company. He said Berkeley's work has been "phenomenal."

In 2019, the company lost $50 million in sales which exacerbated an already difficult environment for the company, according to Modell. A warm winter, “lousy” local sports teams and six fewer days between Thanksgiving and Christmas in addition to the rise of internet retail formed the company’s economic backdrop.

Modell is now looking for outside investors to come in to help him save the company, despite previously insisting he would never sell a minority stake.

RBC is shopping around on behalf of Modell’s searching for a strategic partner. Modell added that his company’s relationship with its banks, Chase and Wells Fargo, has been very positive throughout the process.

In terms of receiving products from vendors — which had been a problematic affair since the WSJ article—Modell noted his company currently has enough inventory, but goods are starting to tighten up as suppliers grow nervous. This is putting a time constraint on the company to resolve its issues.

Modell’s was founded in 1889 by Mitchell Modell’s great-grandfather, Morris A. Modell. The company has been family-owned and had 141 stores prior to the recent closures.

“We’ve got the support of our landlords, of our vendors, I mean, they want a win for us,” Modell said.

Modell’s goal is to save his family's company and every option is on the table that will allow him to do that, he told Bartiromo.

Since his appearance with Bartiromo, Modell received enough positive feedback that he believes he might be able to renegotiate leases with his landlords, potentially saving one or two stores, he told FOX Business' Kristina Partsinevelos.

If the company can get 90 percent of its vendors and landlords to support it, Modell argues, combined with selling a minority stake, the company will have a path to success and its legacy will continue.