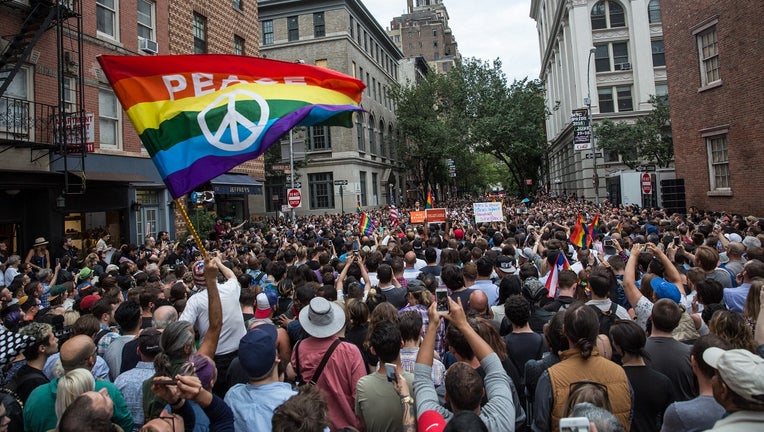 NEW YORK - Michael Olenick was 19 and living a secret social life, letting loose with friends at a speakeasy-like bar with blacked-out windows and one of the few floors in town where men danced with other men. Then the lights came on and the police strode into the Stonewall Inn.

Adrenaline pumping, Olenick worried about getting arrested but also about the action outside - shouting, sirens, sounds of objects being thrown. Gay people got harassed on the streets often enough that he wondered whether they were getting attacked.

He never thought that what he was hearing early on June 28, 1969, would echo for 50 years. It was the start of a rebellion that helped propel and transform the modern LGBTQ rights movement, leaving a legacy in politics, policing and personal lives.

"I'm standing there, not knowing what was going on. That was the horror," recalls Olenick, who was among many patrons police eventually allowed to leave the bar. "And then what came from it was the joy - the enlightenment for the country, for the world, that, 'Hey, we're here. Get over it.'"

At a time when homosexuality was defined as mental illness and showing same-sex affection could be deemed illegal, a diverse crowd of hundreds of gay men, lesbians and transgender people refused to go quietly after police raided the bar. They confronted the officers, hurling coins, bottles, invective and more.

Some bucked arrest and scuffled with officers, who took cover inside the bar for a time before riot police arrived. Demonstrations, defiance and arrests continued for several more nights.

The U.S. had seen some gay protests. But Stonewall proved to be a turning point, kindling a sustained burst of organizing that changed the tone and volume of LGBTQ activism.

"I knew that I deserved the same rights as anybody else, but it took all of that to make me realize that we, as a people, could fight back," says Mark Segal, who was weeks out of high school when he went to the Stonewall that night and emerged an activist. He now publishes the Philadelphia Gay News.

"How could anyone have imagined that going out for a night would end up being history?"

'THINGS HAVE CHANGED A LOT SINCE I WAS A COP'

Officer Charles Broughton had been on raids before. They were common at New York's gay bars, often unlicensed and run by the underworld.

As Broughton recalls, the focus was on people selling illegal drinks, not buying them. Several Stonewall employees were arrested.

While news and other accounts describe police checking people wearing clothes deemed gender-inappropriate - sometimes considered an illegal "disguise" - and arresting some, Broughton says he wasn't involved in that and didn't judge how bar patrons wanted to live.

He didn't anticipate being corralled in the Stonewall by an angry crowd, hoping he wouldn't get hurt as something crashed against the window.

He would ultimately be shoved and kicked by three people, according to an arrest report; Broughton says he doesn't remember it. Overall, at least six people were arrested in the melee. At least four officers - not Broughton - were treated for injuries, according to police reports obtained by historian Jonathan Ned Katz and others. The reports don't reflect any protesters' injuries.

The New York Police Department apologized for the raid this month.

"The actions taken by the NYPD were wrong, plain and simple," Commissioner James O'Neill said.

'WE WANTED SOCIETY TO CHANGE'

Scrawled on the Stonewall's boarded-up windows the night after the raid were words that blew Dale Mitchell's mind: "Support Gay Power."

"I had never seen 'gay' as part of a political slogan before," he recalls, "let alone associated with the word 'power.'"

Mitchell, then 20, was struck by the rebellion and by the crowd that gathered the night after.

Two years later, he would become Indiana University's first openly gay student senator, and his advocacy for LGBTQ people has continued. This month, he was the Boston Pride parade's grand marshal.

Karla Jay heard the urgency as she circulated in the crowd outside the Stonewall the night after the raid. A month later, she was among hundreds on a march to the Stonewall, mobilized by the nascent Gay Liberation Front.

GLF members "didn't care any more about those niceties," said Jay, then a graduate student who became the group's first female leader. "We wanted society to change."

Short-lived but influential, GLF marched in Times Square and picketed news publications. Members started a spectrum of other groups, including a transgender-advocacy organization founded by Marsha P. Johnson and Sylvia Rivera. Activists pressed officials to pass anti-discrimination laws and psychiatrists to stop classifying homosexuality as a mental disorder.

For Paul Glass, Stonewall's impact was more private: He came out to his family a few weeks later.

"It was liberating," Glass says.

A WINDING ROAD OF CHANGE

Today, the Stonewall Inn is part of the first national monument to LGBTQ history. It has undergone various changes but is still a bar, and a rallying point for LGBTQ activists along a winding road of political and social change .

Enduring differences over the movement are as visible as a rainbow pride flag that went up over the Wisconsin state Capitol this month. Where some saw a banner of inclusivity, others viewed it as waving a provocative cause in the public's face .

"It is divisive," complained state Rep. Scott Allen, a Republican.

'HOPEFULLY, THEY WON'T HAVE TO FIGHT'

One afternoon this month, people started tucking notes and keepsakes into envelopes at the New-York Historical Society, there to stay in the Stonewall 50 Time Capsule until 2069.

There were flyers for 1980s nightclubs where one man found a social community, and newspaper clippings about being a lesbian police officer and parent in the 1990s. A young transgender woman left a note to her future self: "I love you for being true to you."

Justin Sams wrote: "You're beautiful. You're worthy. You're brave. You're courageous."

The 27-year-old actor hopes his message will "let the fellow LGBTQ brothers and sisters know that they're worthy and they can keep fighting," he said.

"And hopefully, they won't have to fight."