HARRISBURG, Pa. - It takes hundreds of millions of taxpayer dollars a year for the Pennsylvania General Assembly to maintain one of the country's largest legislative staffs, a small army that needs food, shelter, transportation, office supplies and modern electronics.

An Associated Press review of invoices and more than 6,000 pages of spending line items by the state’s legislative branch last year found lawmakers often use the latitude their own rules provide to decide what to buy and from whom.

There are limits: Expenditures must somehow relate to legislative business, and each member has an annual spending cap. The Senate does some group purchasing, including for office supplies.

They purchased a teach-yourself-Spanish program, $374; rented a zoo for a community event, $1,500; bought fastnachts, a Mardi Gras doughnut, $23; ordered a personalized tablecloth, $260; and picked up some individually wrapped muffins to pass out to commuters at a train station, $80.

One state representative dinged taxpayers for a $1.08 container of hairspray so she could kill flies.

They went through a vast amount of food and drink, often for community events or for groups visiting the Capitol, with costs that sometimes ran in the hundreds, even thousands of dollars.

The Legislature made more than a thousand purchases of snacks, candy and other food in 2018-19. That includes nearly 200 orders by the Senate of “consumable supplies” — snacks and soda — last year at a lawmaker-owned beverage distributor, Breski Beverage, in the Harrisburg suburbs. 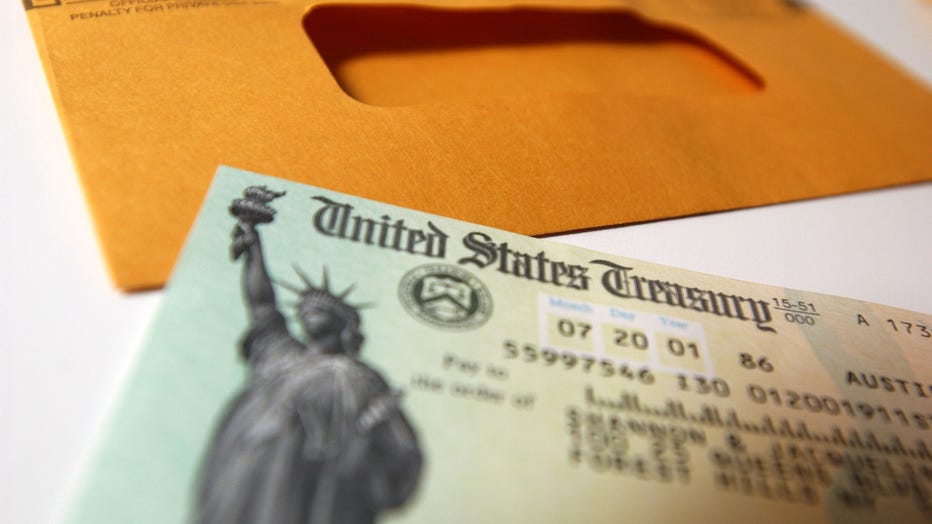 A tax payer rebate check sits on a table July 25, 2001 in New York City. The U.S. government is sending out 92 million tax rebate checks over 10 weeks as part of the Bush administrations tax break. (Photo by Spencer Platt/Getty Images)

Breski's owner, Rep. Tom Mehaffie, R-Dauphin, said he began supplying the General Assembly before being elected to office in 2016. He said he took legal advice that he stop dealing with the House after being sworn in, but that sales to the Senate were permissible. Mehaffie said he does not give the Senate any volume discounts, but has matched soda prices and provides delivery.

To decorate their own offices, lawmakers can order up government-paid custom framing, sometimes to display pictures of themselves. The AP review found about half the 203-member House ordered framing last year. Members are allowed to take the framed pictures and documents with them when they leave office; those left behind can end up being thrown out.

During his final week in office in November 2018, before he retired after 26 years, state Rep. Bill Keller went on a framing spree, including five photos of himself on the House floor and two of himself holding what were described in the invoice as Pennsylvania trophies.

When questioned about it, Keller, a Philadelphia Democrat, immediately said he would repay the money.

“There was nothing wrong with that, but since you’re questioning it, and I’m no longer in office, I will investigate and send a check to the appropriate people,” Keller said. A House business official said a $2,200 reimbursement check from Keller arrived Friday.

Lawmakers' names are plastered on their Capitol office doors and on the district office buildings found throughout the state. One lawmaker ordered a pair of custom wooden state seals fabricated to include his name, at a cost of nearly $600.

The Legislature spent more than $50,000 on signs in 2018-19. The costs varied widely, as did the type of sign — from a humble door marker to a large outdoor display with the legislator's name illuminated. The Senate requires two bids for district office signs that have graphics.

Rep. Steve Malagari, a Democrat from Lansdale, hired a sign business on his block to fabricate a main exterior sign, a brushed aluminum “suite marker,” a vinyl sign for the front window and a 2-foot-by-3-foot sandwich board to catch pedestrians. The cost was nearly $1,300.

Many of the newly purchased signs were for freshmen like Malagari, but some of last year's sign purchases were by veteran lawmakers. Rep. Seth Grove, R-York, saved some rent and expense costs by moving his district office, but the move required more than $1,700 in new signage. He solicited three bids and took the cheapest, Grove said.

Where did his old sign end up? “I guess in the garbage,” he said.

Hal Good, a national expert in government procurement, said the House should reexamine purchasing rules that let state representatives buy district office supplies and other commonly used items on their own. There are office supply vendors, for example, that can deliver directly.

“If it was a group decision to simply do it more efficiently and spend the dollars saved in another way, I think it would be a huge benefit for everyone involved,” said Good, retired after a career in public- and private-sector procurement.

In early February, the AP requested details of spending, zeroing in on accounting categories contained in the General Assembly’s report about its own annual budget, which has grown to $362 million, up from $318 million a decade ago.

The lion's share of the Legislature's costs is easily its $299 million in payroll and benefits. The General Assembly also spent $11 million on leases and millions more on printing, mailing and insurance.

Phones, computers and high-end video equipment for the Legislature are another major cost, with page after page of invoices, and individual items sometimes running into the tens of thousands of dollars. Along with video gear, the Senate also paid an installment on a $6,750 music licensing fee for its video productions.

Legislative records document in detail the cost of maintaining its roughly 2,200 employees and the statewide network of offices, from mundane needs such as bathroom supplies and coffee to flags, brochure racks and security services.

“A lot of times water's just bland,” Dush said. “What is it, two dollars and something for a bottle?"

The 2-ounce containers were about $9 apiece.

Eight House Democrats each incurred $1,997 costs to hold “tele-town halls” in which constituents were invited to participate. Their Republican colleagues had costs for traditional town halls that included $177 for mileage for one town hall, $2,700 for food for another and $420 for security for a third.

Rep. Daryl Metcalfe, R-Butler, said that security cost, to a local vendor, was justified because he has been targeted by protests that disrupted constituent meetings and been the target of threats.

Shredding paper has become a particular interest, as spending records show about a third of House members and five Senate Democrats organized events last year where the public could have documents safely destroyed. Those events, often advertised as free, cost taxpayers more than $44,000 in 2018-19, with lawmakers hiring vendors to do the work. Lawmakers also purchased 16 office shredders with public money, and the House spent $18,000 on a shredding machine maintenance contract. A half-dozen senators hired shredding vendors to serve their offices.

Many lawmakers also give taxpayers the bill for the convenience of having a notary public work in their offices. Last year's spending included hundreds of such invoices, including the notaries' fees, license renewals, bond costs, exam fees, commissions, notary books, classes, stamps and even mileage to take the notary test.

The Legislature restricts notaries working on state time to legislative-related duties, and bans campaign or election work by notaries whose fees have been taxpayer-paid. House Democrats also make notaries who have had taxpayers fund their fees either replay some of the money or resign their commission when their employment ends, and a Senate official said it also regularly seeks repayment of fees when notaries leave their Senate jobs.

Members' marble-and-gold-leaf state Capitol offices are filled with high-end furniture, and the spending records show how making their workspace even nicer remains a work in progress.

The Senate made numerous furniture purchases through the clerk's office last year that included a solid brass table lamp, $440; a pair of 7-foot-wide (2-meter-wide) desks, $7,800; and a set of six executive swivel chairs, $6,600. One senator billed taxpayers $82 for a side table, noting it was to display his Senate photos and awards.

The Senate's office purchases were in cherry, oak and walnut, colored in a starving designer's palette: paprika, pistachio and cappuccino.

The Senate clerk also dropped $35,000 on four museum-quality display cases for its ornate library. Since put to work to highlight the chamber's history, they are currently featured in a new exhibit, “Treasures of the Senate.”