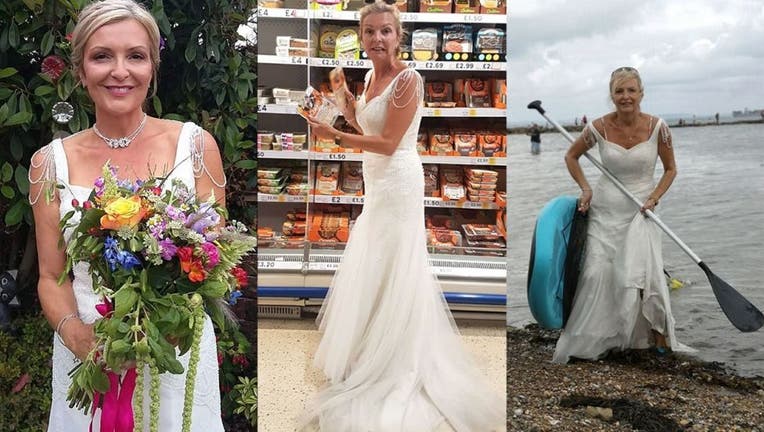 (FOX NEWS) -- One thrifty newlywed in the U.K. keeps reliving the magic of her big day by wearing her bridal gown time and time again — to the grocery store, on a paddleboarding trip, and even while doing chores around the house.

Though Dawn Winfield-Hunt tied the knot with husband Steve earlier in August, she hasn’t quite been ready to put the special dress behind her.

“Usually you only get to wear your dress once and then you put it in a box and forget about it,” the 57-year-old woman said of the gown, according to The Sun. “But I liked mine and decided to wear it the following day for a BBQ with friends and everyone loved it.”

“I plan on wearing it every now and then until my first anniversary next year,” she continued. “It will be covered in seaweed, wine stains and probably won’t even be white anymore but I don’t care.”

Winfield-Hunt, who lives on the Isle of Wight off the south coast of England, admitted that while her pals think the fashion statement is hilarious, the post-nuptials look is often confusing for strangers.

“The dress puts a smile on people's faces, many of which think it is my wedding day and congratulate me as they are passing by in the street,” the bride said.

“When I arrived at the checkout in the supermarket, the lady said she had received a message through her earpiece saying ‘bride in aisle 12’ which is pretty funny,” she said.

Winfield-Hunt scooped up the dress for $365 at a thrift shop, and feels that the gown — which still had the $2,186 price tag on it, and appeared never to have been worn -- was a bargain. She then completed the alterations on the dress herself, and she's been sporting it around ever since

“I have definitely got my money’s worth by wearing it on the weekends," she said.

One person in the woman’s life, however, thinks the stunt is crazy.

But with a “bucket list of adventures” — including a kayaking trip — to complete in her wedding dress, Winfield-Hunt’s new hubby thinks it’s a riot.

“Steve is always camera-ready and finds it hilarious too, we are always having fun,” she said. “I love that the dress makes other people happy too.”

In matters of opinion, the low-key bride might have the right idea. On the opposite side of the (wedding) aisle, a recent study reported that pricey wedding party expenses can ruin friendships, participants claimed.