Going shopping? Here are the major retailers that are requiring customers to wear masks

Amid the rise in COVID-19 cases across the U.S., national retailers have rolled out new policies that will require customers to wear facial coverings while shopping in stores.

Some customers are boycotting Trader Joe’s after a former worker claims he was fired for requesting the company do more to uphold health and safety measures for workers during the pandemic — but Trader Joe's is saying he was let go for an entirely different reason.

Ben Bonnema, a former employee of Trader Joe’s Upper West Side location in Manhattan, claimed on Twitter last week he was fired for asking for safer workplace conditions. Bonnema alleges he wrote a letter to the company's CEO, requesting heightened safety measures such as improved filtration, limiting store capacity based on CO2 levels, not allowing anyone inside the store without a mask, and adopting a "3 strikes policy" to keep "uncooperative people from our stores." 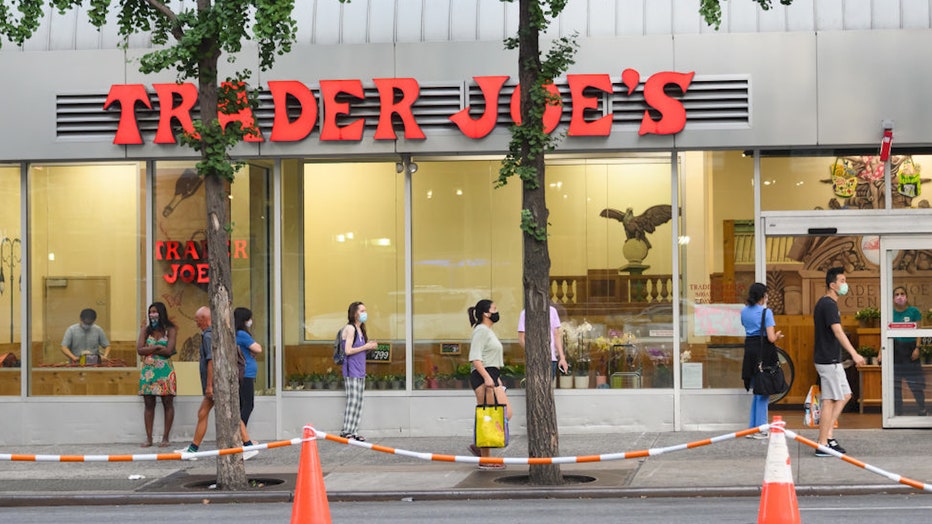 FILE - People stand in line outside Trader Joe's in Kips Bay as New York City moves into Phase 3 of re-opening following restrictions imposed to curb the coronavirus pandemic on July 9, 2020.

"I was recently shouted and sworn at by a customer who would not wear his mask above the nose, despite [employees] already asking him to do so. He was allowed to finish his shopping and check out," Bonnema wrote.

Bonnema concluded the letter by saying: "We put our lives on the line every day by showing up to work," he wrote. "Please, show up for us by adopting these policies."

Bonnema was later let go, according to a termination letter he allegedly received from the company after submitting his suggestions to the CEO.  "It is clear that you don’t understand our values, as a result, we are no longer comfortable with having you work for Trader Joe’s," the letter allegedly stated.

Trader Joe's, however, has said his termination had nothing to do with the letter.

Meanwhile, a number of Twitter users were quick to come to Bonnema’s support, with one individual saying: "Time to start a boycott of Trader Joe’s. Disgusting way to treat their staff."

"It is clear that I also do not understand their values. Therefore, I will never shop there again. You did the heroic & right thing, @BenBonnema. Major fail, TJ’s. Not only are you endangering your staff and customers, you lost a super-smart, caring team member."

Another supporter of Bonnema on Twitter said his firing was simply "bad business" on Trader Joe's part.

Friend-Daniel told Newsweek in an email  "nothing" is more important than customer and employee safety, explaining: "We encourage all Crew Members to take an active role in store safety, and share their suggestions with leadership."