Police combed through hours of surveillance footage to identify the suspect in a May acid attack as 25-five-year-old Milad Rouf. (Source: Sussex Police Department)

BRIGHTON, United Kingdom - Twenty-five-year-old Milad Rouf will spend the next 11 years in prison and an additional four years on an extended license as a dangerous offender for conducting an attack that left his ex-girlfriend permanently disfigured.

During a plea hearing on Aug. 16, Rouf confessed to throwing acid on his 24-year-old ex during a surprise attack on May 20. Lewes Crown Court handed down his sentence on Oct. 7.

Initially, Rouf denied his involvement in the attack, and investigators said he went to great lengths to misdirect them.

If not for participation by the Brighton community and hundreds of hours of surveillance footage, those efforts might have been successful.

"I would like to thank the officers who responded to the incident and the wider community for their huge support in our investigation," Detective Superintendent Mike Ashcroft said in a news release. "We approached and engaged with a wide range of businesses in the city centre and they provided us with hundreds of hours of CCTV."

Investigators said Rouf disguised himself to look like a heavy-set Black woman. It was enough to fool witnesses, who initially told police the suspect was a Black woman wearing a black jacket and a COVID visor.

In an effort to disguise his motive, police said Rouf handed the victim a note that had been addressed to the previous tenant of her home. The note demanded money.

Rouf then threw acid over the victim’s face, neck and chest, leaving her with life-changing injuries. In a statement read to the court, the victim said she’s lived with constant physical and psychological pain, fear for her future wellbeing and socioeconomic hardship.

"The impacts include severe damage to my right eye (which I am still unable to see out of), damage to my eyelids and the skin of my face, neck, chest and arm. I am unable to fully move my neck or close my eyelids," the victim said. "So far, I have had five painful, life and appearance-altering surgeries. I am still trying to come to terms with the fact that my life, for the foreseeable future, will involve more hospital appointments, procedures and operations."

The victim and Rouf had been in a relationship up until March of this year. Before the attack, she worked as a junior doctor. Now, she has been unable to attend work.

While she reckoned with her new reality, she expressed gratitude for the investigators like Officer Rose Horan, who brought Rouf to justice.

"This was a premeditated, malicious and harrowing incident and I’d like to thank the victim for showing such incredible bravery and dignity throughout. She has been inspirational, and we continue to support her during this difficult time," Horan said.

After the attack, police conducted house-to-house interviews, focusing on a nearby home with a doorbell camera. This confirmed the suspect’s description given by witnesses — a black jacket, white trainers, blue jeans and carrying a blue backpack.

The footage showed the suspect first walking by before the attack, then fleeing afterward. From there, investigators contacted dozens of businesses and combed through hundreds of hours of their surveillance footage tracking the suspect.

Police said the footage showed Rouf changing his appearance, shedding his previous disguise along the way. He’s then seen stopping at a store to buy a sweatshirt, blue and white jacket, cream backpack, sunglasses and an LA baseball cap. 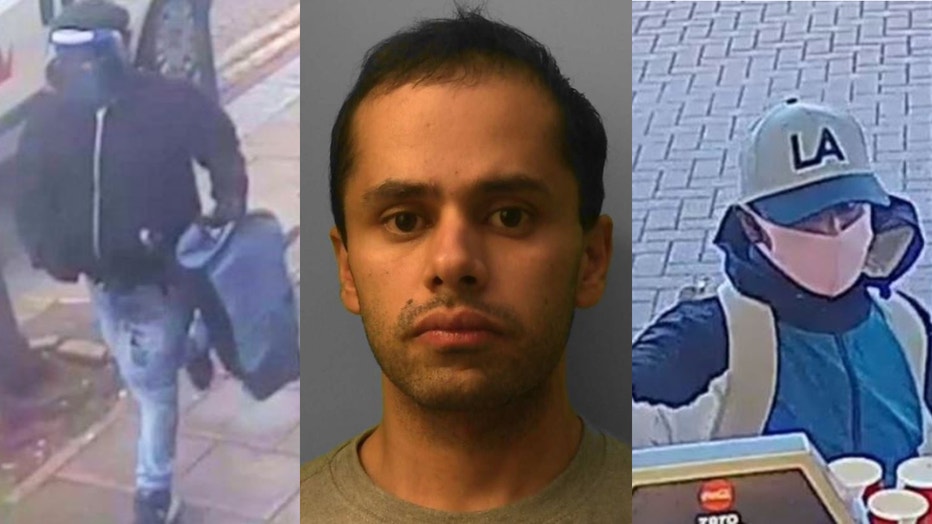 Police combed through hours of surveillance footage to identify the suspect in a May acid attack as 25-five-year-old Milad Rouf. (Source: Sussex Police Department)

Police said he asked a security guard what time the trash bins would be emptied, telling them he’d accidentally thrown a phone away. The suspect retrieved the phone before leaving the area for good, boarding a train bound for London Victoria.

"The evidence we were able to uncover in this case showed that Rouf spent considerable time planning this calculated attack," Horan said. "He changed his entire appearance in a convoluted attempt to get away with this cruel act. He wore padding under his clothing to appear as a large build female, made his skin look darker, wore a wig and even disguised his motive with the debt note he threw at his victim."

Investigators identified Rouf once the footage showed him dropping the disguise. They arrested him in his home in Cardiff, where they also found the blue jacket, baseball cap and cream backpack seen on the video. 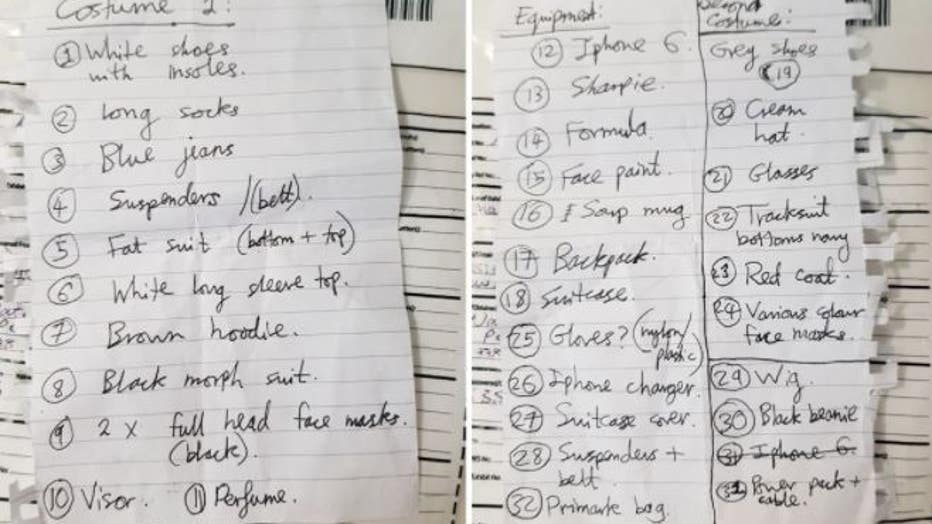 Investigators found handwritten lists, titled "Costume 1," "Equipment" and "Costume 2" inside the home of Milad Rouf, the man who confessed to throwing acid on his ex-girlfriend. (Source: Sussex Police Department)

Further searching revealed handwritten lists, titled "Costume 1," "Equipment" and "Costume 2." Police say most of the items listed match what was observed in the video.