Ahead of the annual U.N. General Assembly meeting next week, Antonio Guterres warned governments that climate change is proceeding faster than predicted and fossil fuel emissions have already bounced back from a pandemic dip.

Speaking at the launch of a U.N.-backed report summarizing current efforts to tackle climate change, Guterres said recent extreme weather — from Hurricane Ida in the United States to floods in western Europe and the deadly heatwave in the Pacific Northwest — showed no country is safe from climate-related disasters.

"These changes are just the beginning of worse to come," he said, appealing to governments to meet the goals of the 2015 Paris climate accord.

"Unless there are immediate, rapid and large-scale reductions in greenhouse gas emissions, we will be unable to limit global heating to 1.5 degrees Celsius (2.7 Fahrenheit)," said Guterres. "The consequences will be catastrophic." 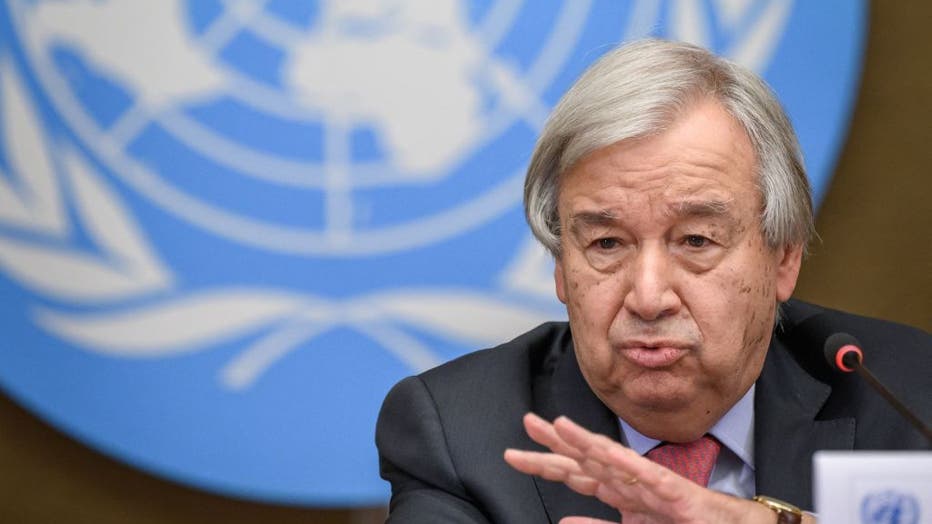 FILE - U.N. Secretary-General Antonio Guterres gestures during a press conference on a hosts aid conference on Afghanistan, in Geneva on Sept. 13, 2021. (Photo by FABRICE COFFRINI/AFP via Getty Images)

RELATED: Climate change could force over 200 million people to move by 2050, report says

In their report, titled United in Science 21, six U.N. bodies and scientific organizations drew on existing research to argue that there is a direct link between human-caused emissions, record high temperatures and disasters that have a tangible impact on individuals and societies, including "billions of work hours (...) lost through heat alone."

Because of the long-lasting effects of many emissions already released into the atmosphere, further impacts are inevitable, they noted.

"Even with ambitious action to slow greenhouse gas emissions, sea levels will continue to rise and threaten low-lying islands and coastal populations throughout the world," the authors wrote.

President Joe Biden and Vice President Kamala Harris opened Earth Day's climate summit, with an ambitious pledge to cut by at least one-half the climate-wrecking coal and petroleum fumes that America is pumping out.

University of Michigan environment dean Jonathan Overpeck, who wasn't part of the report, said scientists have said this before but it's important: "The situation is getting bad, we know why and we know how to solve it in ways that leave us, and future generations, with a better, healthier, more sustainable world."

Guterres urged governments to put forward more ambitious plans for cutting emissions by the upcoming U.N. climate summit in Glasgow, including a commitment to stop adding more greenhouse gas to the atmosphere by mid-century than can be removed.

Michael Mann, a prominent climate scientist at Pennsylvania State University, said he agreed with the report's

message of urgency but questioned some of the starker warnings it contained.

In particular, the 1.5C threshold agreed in Paris didn't apply to individual years, some of which can be unusually hot due to other factors, he said.

"This misleading framing unnecessarily feeds the fears that the public has that we’ve somehow already crossed that threshold and that it is too late now to prevent," said Mann. "We have not. And it is not."

He also noted that the drop in emissions seen during the pandemic could be viewed as a positive sign that significant cuts are possible if entire economies are weaned off fossil fuels.

The United States, Britain and the European Union have already made pledges that — if implemented — would help avert dangerous planetary warming, said Mann.

Naturalist David Attenborough gives a pre-recorded video message on the final day of the G-7 Summit.

Kim Cobb, a professor of Earth and Atmospheric Sciences at Georgia Tech, was equally reassured that the 1.5C target isn't out of reach.

"However, this new report is a stark reminder of the difference between the emissions pathways required to achieve that target, and the reality on the ground," she said. "Simply put, we are way off course."