CLEVELAND - The U.S. Marshals Service found 25 missing children from Ohio over the past 20 days in a joint operation with other law enforcement agencies, officials said.

According to a news release from the U.S. Marshals Service, the agency has worked with Ohio authorities over the past 20 days locating and recovering missing juveniles from all over the state.

Children were rescued in Cleveland, East Cleveland, Akron, Mansfield, Euclid, Willoughby and even as far as Miami, Florida.

The agency said that a quarter of the children recovered were confirmed to be victims of human trafficking or prostitution.

Operation Safety Net was first announced on Aug. 6 as an initiative by the U.S. Marshals in partnership with Ohio police with the aim of locating and rescuing endangered or missing children.

The news follows the U.S. Marshals’ rescue of 39 missing children in Georgia and the arrest of nine suspects last week.

Dozen of missing children were found during

A U.S. Marshals spokesperson said that the suspects in both the Ohio and Georgia incidents were not related.

The U.S. Marshals Service announced Thursday that 13 missing children were found and an additional 26 endangered children were rescued during that two-week operation centered on Atlanta and a city to its south, Macon.

The missing children were considered to be “some of the most at-risk and challenging recovery cases” and some were likely victims of child sex trafficking, child exploitation, abuse and had medical or mental health conditions, authorities said.

“When we track down fugitives, it’s a good feeling to know that we’re putting the bad guy behind bars. But that sense of accomplishment is nothing compared to finding a missing child,” said Darby Kirby, chief of the Missing Child Unit. “It’s hard to put into words what we feel when we rescue a missing child, but I can tell you that this operation has impacted every single one of us out here.”

U.S. Marshals Director Donald Washington said the FBI has reports of more than 421,000 missing children and of those, around 90% are considered endangered runaways. One in six of the endangered runaways is likely to become the victim of sex trafficking, authorities said. 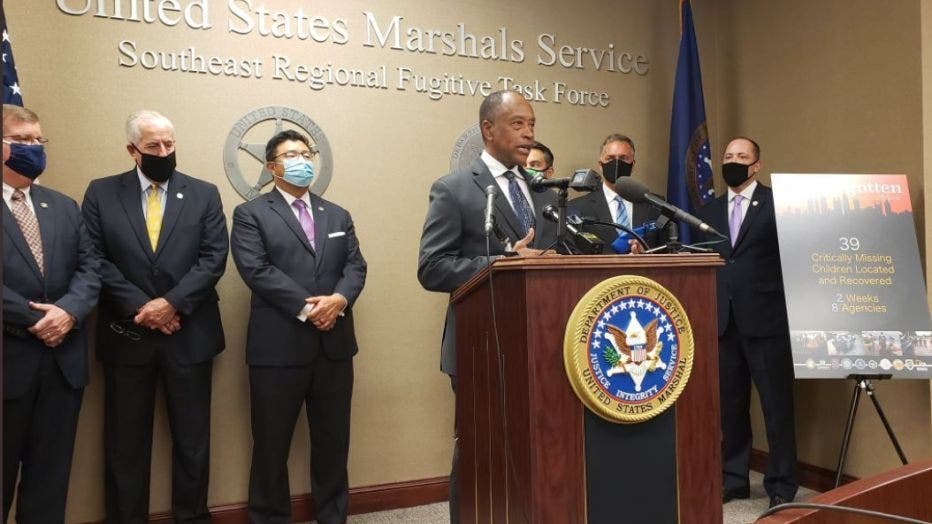 Photograph of press conference with U.S. Marshals announcing the rescue of 39 children in Georgia.

According to Washington, roughly 300 young girls in the Atlanta area are lured into trafficking every month. One of his most important messages was directed to victims of trafficking — “We will never stop looking for you.”

“The U.S.  Marshals Service will continue to be asking for support from the community in locating these missing kids,” writes a release from the agency.