During a visit to the Goddard Space Center in Maryland on Friday, Vice President Kamala Harris announced that she, along with other leaders of the Biden administration, will hold an inaugural National Space Council meeting on Dec. 1.

GREENBELT, Md. - Vice President Kamala Harris announced on Friday that she, along with other leaders of the Biden administration, will hold an inaugural National Space Council meeting on Dec. 1.

"At that meeting, we will outline a comprehensive framework for our nation's space priorities. From our civilian efforts like those we have seen today to our military and national security efforts to STEM education and emerging space economy and what is abundantly clear is that when it comes to our space activity, there is limitless potential," Harris said during a visit to NASA's Goddard Space Center.

Accompanied by Sen. Chris Van Hollen, D-Md., Harris piggybacked off the remarks made by world leaders gathered at COP26 — the United Nations’ climate change summit — and declared climate change as an existential threat.

"We must take immediate action to address it," Harris stressed. "As our nation works to meet our climate commitments, we know that our actions cannot be limited to only what we can do on Earth. Right at this minute, we are monitoring emissions and measuring the impact of climate change from space. We have a fleet of satellites and sensors providing citizens and scientists the data that they that you need to mitigate the impact and to adapt to the impact." 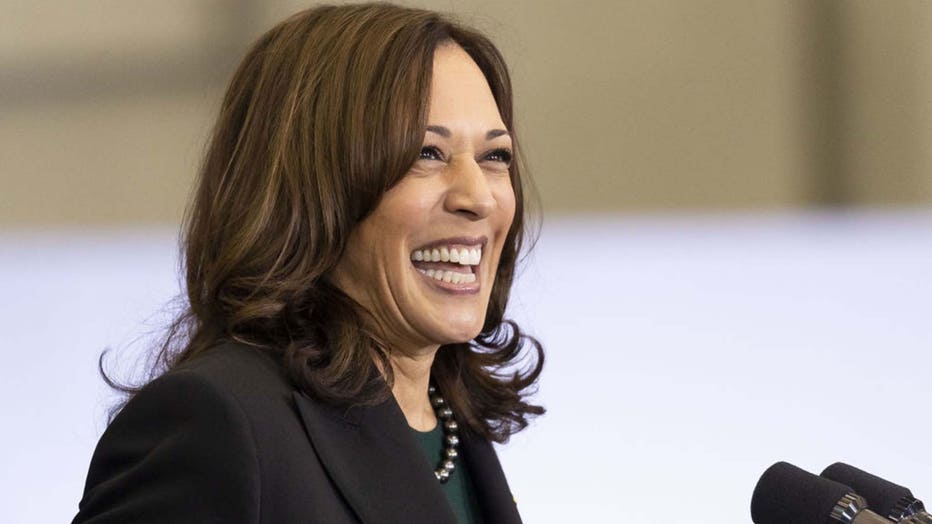 Harris noted the work being done by Landsat 9, which is a satellite that was launched on Sept. 27 aimed to track the "health" of the planet.

Landsat 9 will join its sister satellite, Landsat 8, and the pair will work in tandem to "collect images spanning the entire planet every eight days," according to NASA.

The nearly $500 billion allocated in Biden’s $1.85 trillion bill to tackle climate change would have the government impose penalties on electric utilities that fail to meet clean energy benchmarks and provide financial rewards to those that do — in line with Biden’s goal of achieving 80% "clean electricity" by 2030.

Other climate-change-fighting proposals being considered are a tax on carbon dioxide emissions from fossil fuels such as oil and coal or a methane emissions fee.

Failure to act on climate change would have far-reaching consequences in the United States and abroad. Inaction, proponents of big efforts say, could cost the U.S. billions of dollars in weather-related disasters and threaten to uproot millions of Americans in hurricanes, wildfires, droughts and floods.