This video shows inside a car involved in the pileup. The driver who shot this said he was stuck in his vehicle for hours. He got out okay and is now sharing his story.

FORT WORTH, Texas - More details are being released about the victims of the chain-reaction crash in Fort Worth Thursday and the survivors who had to wait for hours to be rescued.

The pileup on Interstate 35W just north of downtown happened right around rush hour so many if not most of the people involved were essential workers.

All 135 vehicles have been cleared from the scene of the deadly crash. All lanes have since been opened.

State lawmakers are calling for the state attorney general and other state agencies to investigate what led to the pile-up.

RELATED: Lawmakers looking for answers about deadly Fort Worth pileup

Cleanup continues at site of deadly Fort Worth pileup

Work continues to try to clear the massive wreck on Interstate 35W in Forth Worth that left six people dead and dozens injured.

North Tarrant Express Mobility Partners oversees the lanes and said in a statement that crews started treating the highway on Tuesday.

"The truck just came through and rammed me. Boom! Then the other car came and hit me again. Boom!" she recalled. "I hit my brakes, I went to sliding like real fast."

Porter’s car stopped just before he hit an ambulance. Then, another car hit him.

Porter was headed to work on the Southbound Express Lane, a normal route for him and another driver involved in the crash, Nick Stevenson. But as soon as Stevenson hit the bridge after 28th, he says he lost control.

"Once I crossed over that, it was just all black ice," Stevenson said.

Stevenson took a video on his cellphone shortly after the crash.

"I looked at my rearview and there was a semi coming up on me," he said. "And it rear-ended me and made me shove the black car in front of me into the semi." 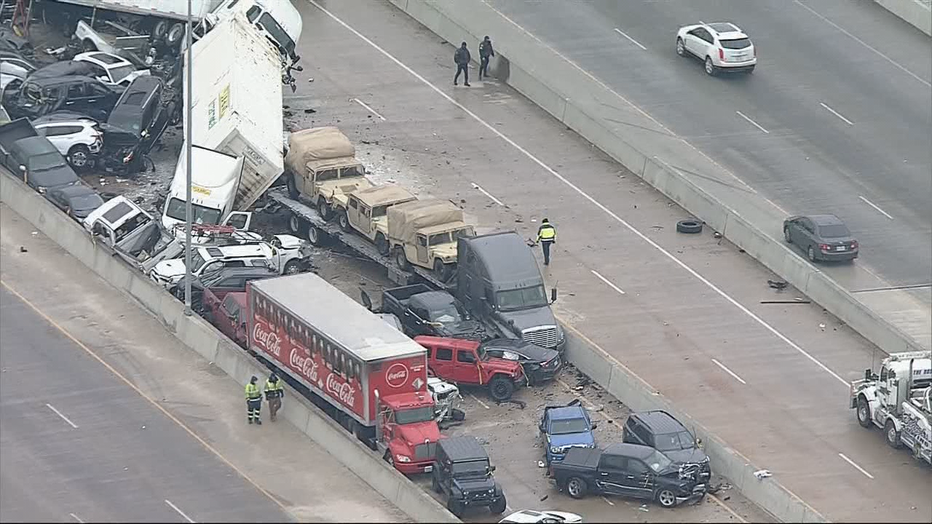 Stevenson’s airbags deployed, the hood of his car was smashed and his back window shattered. Stuck in his car for the next two hours, he used an extra coat to stay warm while he called his wife.

"I called her when I was sitting in the truck to let her know I was in an accident and that I was okay," he said.

Porter made the same call. His wife, Tamara, tried to stay calm since she’s still recovering from a stroke she suffered two weeks ago.

Porter and Stevenson were both treated at nearby hospitals. They’re now both home.

"My whole body is sore. Just glad to be alive," Stevenson said.

That gratitude is likely felt by many of the survivors and their families.

"If you think about the timing of the crash and people who can’t opt not to travel, it’s going to be your frontline health care workers and others, truckers as well," said Matt Zavadsky, a spokesman for MedStar Ambulance Service.

Zavadsky said many of the 65 people injured in the crash were wearing scrubs or had hospital IDs on. More than half went to hospitals for treatment.

Some people who witnessed the crash also rushed to help free trapped drivers.

Ryan Chaney was headed to work on I-35W when he was involved in a fender bender on the main lanes. Around the same time, he heard the sound of vehicles skidding and crashing in the TEXpress lanes.

Some of the many people involved in Thursday's chain-reaction crash in Fort Worth were stuck in the wreckage for what must have seemed like an eternity. And their families waited for word on them. FOX 4's Hanna Battah shared some of the stories.

Chaney said he immediately ran to help people trapped inside their cars. He had to break the window of one SUV to pull a woman out.

"After beating on it for what seemed like three minutes I got a hole. I was able to get my hand through it but it was still too tough so I ended up just punching it until it finally gave out. I pulled her out and got her over the barrier," Chaney recalled. "So many people were just kind of popping up and getting people out of their cars. I mean, within a few minutes this thing was half a mile and longer."

"This was an unbelievable scene from the perspective of not only the scene safety issues, the multiple casualties that we had. It was dark. It was freezing cold. It was raining and freezing when the rain hit the ground," Zavadsky said.

Paramedics who were worried about hypothermia brought in buses to keep the survivors warm in the freezing temperatures. A reunification center was later set up for people involved in the pileup to reconnect with their families.

Fort Worth police said four officers were also injured in the crash. Three were on their way to work and one was injured helping at the scene. They’ve all been released from the hospital.