A pair of masked bandits grabbed iPhones and other loot worth $35,000. (Credit: @ppv_tahoe)

PALO ALTO, Calif. - A pair of masked bandits are still at large after brazenly robbing a California Apple store in broad daylight on Black Friday, and video of the incident has gone viral showing staff watching on and warning customers against intervening as the thieves made away with tens of thousands of dollars in loot.

The footage taken from inside Apple's flagship Palo Alto location shows the two suspects ripping iPhones from display tables and stuffing them into backpacks as dozens of shoppers looked on.

Employees can be heard telling customers, "You gotta back up, man," and "Let 'em go," deterring anyone from confronting the thieves. One onlooker can be heard asking, "Yo, should we stop 'em?"

According to Palo Alto Online, police are still searching for the perpetrators, who made away with $35,000 in merchandise. 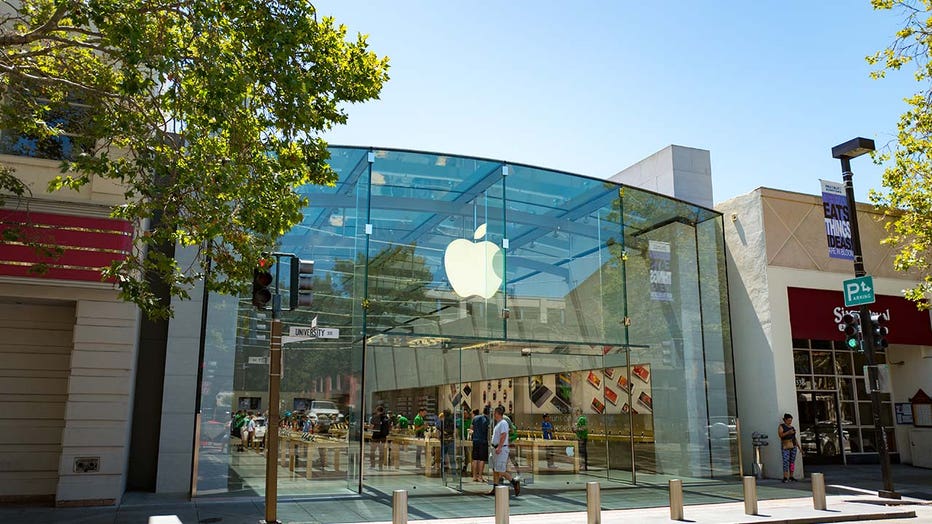 On a sunny day, a man walks past the entrance to the flagship Apple electronics store on University Avenue in downtown Palo Alto, California, 2016. (Photo by Smith Collection/Gado/Getty Images).

Two people are seen stealing iPhones and other merchandise from an Apple store in California on Black Friday (Credit: Instagram: @ppv_tahoe)

Palo Alto police Capt. James Reifschneider told the outlet an employee at the store during the heist heard one of the suspects threaten customers with physical violence if anyone made a move to try to stop them. He noted that the purported threat elevates the crime to robbery from a burglary shoplifting charge.

The suspects are both described as Black males in their late teens or early 20s. One was wearing a tan hoodie and jeans while carrying a red backpack, and the other wore a black and gray camouflage hoodie, black Adidas-type pants and carried a black Adidas backpack.

Police are asking anyone with information about the crime to call them at 650-329-2413.

RELATED: One dead, up to 16 injured after driver crashes into Massachusetts Apple store

The New York Post reported that Apple's Palo Alto retail location has been targeted by thieves in the past.

The Silicon Valley store was robbed twice within 24 hours in 2018, when suspects stole more than $100,000 worth of products. In 2016, criminals drove a rented vehicle through the front window of the store in order to steal thousands of dollars in merchandise.

Find more updates on this story at FOXBusiness.com.