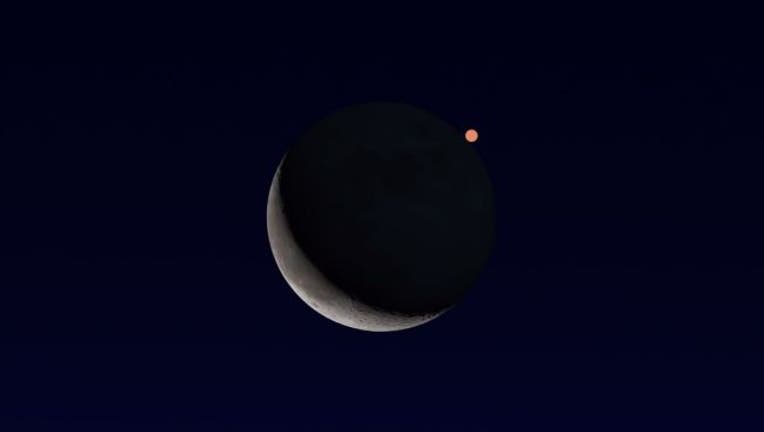 The waning crescent moon and the planet Mars will put on a show Feb. 18, appearing quite close to each other in the southeastern sky. The moon will pass in front of Mars, blocking the planet from view, but for the eastern half of the U.S. this will o

LOS ANGELES - If weather permits, you may be able to see a rare celestial event with your unaided eye before sunrise on Tuesday, February 18, 2020. That's when Earth, the Moon, and Mars will all be in alignment, and you'll be able to watch Mars "go behind" the Moon.

This event is known as an occultation -- an astronomical term defined as a moment when one object is hidden by another object that passes between it and the viewer.

To watch this event, look low to on the south-southeast horizon around 3:30 am Tuesday morning, you will see the planet Mars near the bottom of the waning crescent moon -- which is 24% illuminated. At 3:38 am, Mars will start to disappear behind the moon. Over the next minute, you will see the plant grow darker until it disappears completely. It will stay behind the Moon for about 50 minutes.  Then at 4:29am, Mars will re-appear to the right of the moon, reappearing faintly, then growing brighter over the next minute. The sun will rise a couple of hours later, around 6:35 am.

You can watch this event with the naked eye or binoculars, although a telescope will provide the best view.

This can only be seen by viewers in much of central and eastern North America, and if you're in Los Angeles, you're one of the lucky ones who will be able to see Mars both before and after the Moon glides in front of it. Unfortunately for viewers in San Francisco and further north, the moon will not be above the horizon before the beginning of the occultation. They'll miss Mars disappearing, but will be able to see it re-appear. And if you're living on the east coast, you will miss it entirely, since it takes place after the break of dawn as daylight overpowers the light being reflected off of Mars.

This is the only lunar occultation of a major planet visible from North America at night in 2020.