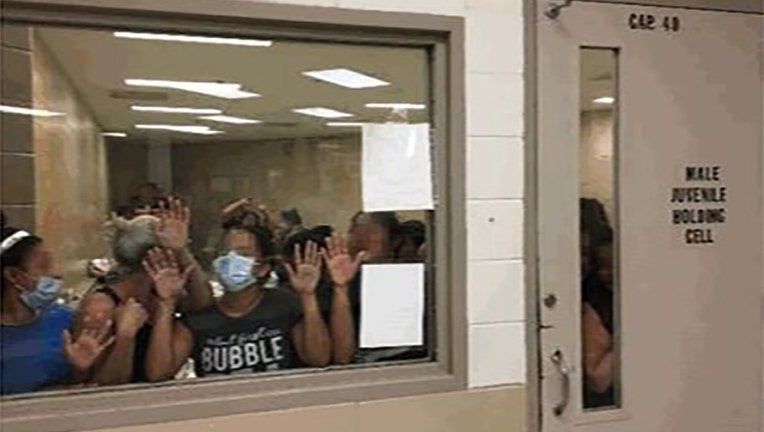 HOUSTON - A whistleblower report provided to BuzzFeed News alleges U.S. Immigration and Customs Enforcement has “systematically provided inadequate medical and mental health care” to detained migrants, leading to complications that included the removal of part of an 8-year-old boy's forehead.

The report published Thursday says poor medical care contributed to two preventable surgeries and contributed to four deaths in detention. It renewed harsh criticism from migrant advocates and Democrats of President Donald Trump's immigration crackdown, during which there have been reports of squalid conditions in packed cells and crying children left to fend for themselves after being taken from their parents.

At the Stewart Detention Center in Lumpkin, Georgia, a man who was bleeding through his skin continued to receive aspirin even though he had extremely thin blood. The man was eventually taken to a hospital in critical condition and not expected to survive, according to a report summarizing the complaint that was delivered to ICE leadership in March.

In Arizona, a detainee at the Eloy Federal Contract Facility had “worsening psychosis-related symptoms, but the psychiatrist failed to treat him,” the report says.

And at the South Texas Family Residential Center in Dilley, Texas, a boy was initially diagnosed with an external ear infection, only to have seizures two weeks later. Doctors at the hospital diagnosed him with Pott's puffy tumor, an infection that leads to abscesses formed under the skull. They treated it by extracting part of the boy's frontal bone, BuzzFeed reported.

ICE said in a statement that it “takes very seriously the health, safety and welfare of those in our care, including those who come into ICE custody with prior medical conditions or who have never before received appropriate medical care.”

The BuzzFeed report provides the latest series of allegations that ICE and other immigration agencies don't properly care for the people in their custody as the Trump administration has ramped up its use of detention.

ProPublica last week revealed that surveillance video showed a 16-year-old boy who died of the flu at a Border Patrol station in South Texas laid unresponsive in his cell for several hours before someone noticed. Carlos is one of six children to have died after being detained by border agents since last December.

And advocates have long warned that the ICE Health Service Corps misdiagnoses or disregards symptoms.

The complaint obtained by BuzzFeed lists four adults who died in ICE custody in 2017 and 2018. After one person at Eloy was listed as dying of coronary heart disease, a person alleged that was “very misleading” and didn't account for “the lack of readily available emergency medications” or the mistakes of the facility's psychiatrist.

In another case, a man died in what was ruled a suicide after telling jail staff at Stewart that he “would be dead in three days.” The report did not say how he killed himself.

“Trump and ICE officials silently watch as chaos, cruelty and inhumane indifference ensues,” said Pili Tobar, deputy director for the advocacy group America’s Voice. “Rather than use the resources already allocated for medical care, they instead cover up, deflect and turn a blind eye to migrants seeking medical help.”