“If anyone is alone today and feeling lonely, you are invited to my Thanksgiving dinner,” Jessica Kantrowitz wrote on Twitter. “I made lemon & rosemary turkey. Tell me your hair & eye color & what you’re bringing, & I’ll draw you in.”

LOS ANGELES - Jessica Kantrowitz usually spends the Thanksgiving holiday with her parents in New Hampshire, but this year, she was one of many who chose to stay home alone due to the COVID-19 pandemic.

The change in plans didn’t stop the Boston resident and author from thinking up a way to spread a little holiday cheer with a creative take on a virtual Thanksgiving party.

“I've been on social media for many years and have so admired people like Jonny Sun, Jenny Lawson, and Glennon Doyle who have found ways to try to create connection and community online,” Kantrowitz told FOX TV Stations. “I wanted to find a way to use Twitter to draw people together and help us all feel less isolated during this time, while still staying safe.” 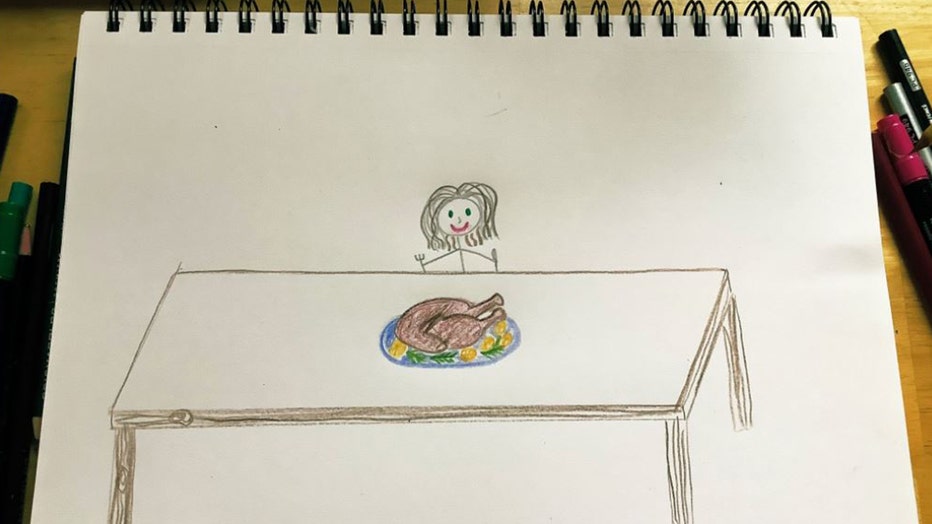 On Thanksgiving morning, Kantrowitz drew a picture of herself alone at the dinner table with a turkey on the table and posted the drawing to Twitter.“If anyone is alone today and feeling lonely, you are invited to my Thanksgiving dinner,” Kantrowitz wrote on Twitter. “I made lemon & rosemary turkey. Tell me your hair & eye color & what you’re bringing, & I’ll draw you in.”

Hundreds of comments poured in on social media from people requesting to join the party. One by one, she began drawing them around her table.

“Your hair and orange jello salad add a lot of color to our table!” Kantrowitz replied to one commenter. “Your pecan pie looks more like a mushroom pizza, but I’m sure it’s delicious. Welcome!," she wrote to another Twitter user.

Kantrowitz is a writer and author, but said she has been working on her drawing skills and has been trying to stretch her creative muscles with small, simple illustrations.

RELATED: Technology helps bring families together for a virtual Thanksgiving

“It occurred to me that the visual element might make it seem more cozy and real,” Kantrowitz shared.

By the afternoon, Kantrowitz had received an overwhelming amount of requests.

“I actually panicked a little at first because I realized it was going to take a lot of time and energy! But I made myself some coffee and leaned into the task. After I had done the first few sketches, I was getting a lot of positive energy back that helped me keep going,” Kantrowitz said.

“It was a great exercise in putting my drawing out into the world without being self-conscious and a perfectionist. And it was wonderful to see the way that people responded to seeing a warm invitation on a medium that's often stressful and harsh,” Kantrowitz shared.

Since Thursday, her posts have garnered thousands of reactions. Kantrowitz said she was surprised by the response.

“Welcome to everyone who's still rolling in! I wish I could draw all of you beautiful people. But even though the drawing is done, the feast is still going strong, so pull up a chair and grab a plate!” Kantrowitz wrote later that afternoon. 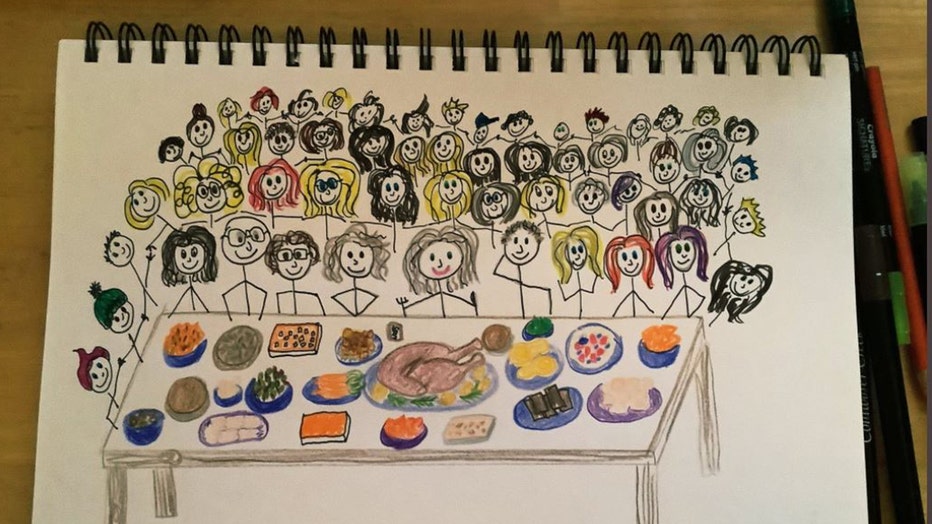 “I was pretty sure I had friends and followers who would want to join me, but I was surprised by how big it got. I think I have something like several thousand people still at my ‘house’ having leftover turkey sandwiches! Thankfully, several people have also volunteered to do the dishes," Kantrowitz joked.

Friday morning, Kantrowitz was back on social media. “GOOD MORNING! You are all still in my house, huh? Okay, I'm making a BIG pot of coffee. Who takes cream and sugar?” Kantrowitz tweeted.

“It was a reminder of the power of gathering together for a meal, even a virtual one. People are still sharing recipes on the thread! I'll have to go back and get some ideas for new things to try myself,” Kantrowitz said.