Baxter, a 10-year-old German Shepherd, is a certified support animal for the Anaheim Police Department. Every week, the rescue dog volunteers at the courthouse in Orange County, California, supporting human trafficking survivors.

ANAHEIM, Calif. - A California county’s first and only volunteer service dog who supports human trafficking survivors is now in need of physical therapy due to arthritis from his strenuous work helping traumatized victims.

Baxter, a 10-year-old German Shepherd, is a certified support animal for the Anaheim Police Department. Every week, the rescue dog volunteers at the courthouse in Orange County, California, supporting human trafficking survivors.

“The survivors are tense and don’t want to talk to people usually, but when Bax comes — they just have an immediate bond,” said Cheryl Timmons, who is Baxter’s owner and dog mom. “The survivors just cry and break down, hug Bax and tell him their stories.”

Each week, Baxter helps about three to eight human trafficking survivors, with their ages ranging from around 13 to 18 years old, Timmons said. Some have even cried so much that their tears soaked Baxter’s coat, but he just stands or sits still to let them love him, she said.

Baxter’s mom recounts the story of one human trafficking survivor opening up to her furry son.

“There was one girl that just wouldn’t talk to the judge. She wouldn’t talk to anyone. Anyway, the judge said ‘let us leave the room’ and leave Baxter in here with her and of course I stayed with him. I looked at her and saw the tears just rolling down this girl’s face,” Timmons said. “And Baxter walked over to her. She put her head in his coat and just cried and cried. She finally started telling Baxter all of her cares and how upset she was.”

Timmons said the young girls and women can relate to Baxter because of his childhood.

When he was first rescued, he was around 2 years old, stranded and wandering alone with only a yellow tie around his neck in San Bernadino, California. A local shelter then rescued him, after which the German Shepherd Safe Haven set him up with a family that had a child with disabilities.

Timmons thinks that because Baxter grew up in this environment, he learned to be calm, patient and loving. When the family could no longer raise Baxter, they gave him back to the Safe Haven, which was where Cheryl rescued him at 4 years old. 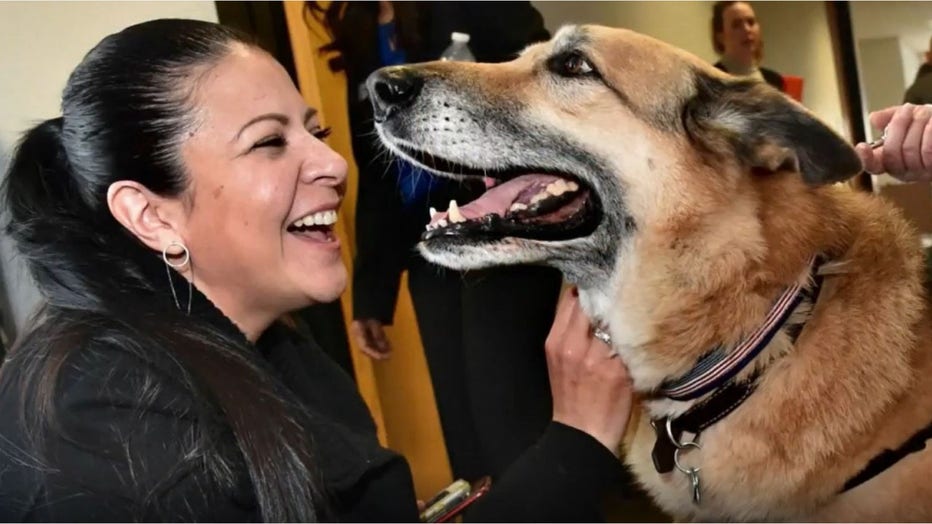 Baxter was added in 2018 to GRACE Court to provide support and assist inside the courtroom. He is the first and only dog to be used in Orange County for this purpose, Timmons said.

“He’s amazing,” said Sgt. Juan Reveles of the Anaheim Police Department, who leads the law enforcement component of the OCHTTF. “It’s just a very dark spot that they (the victims) are in and don’t want help. For me, when I sat there at court, and got to see that for minutes of joy... extreme joy... that this dog can bring them...  just kind of get them to that world for a little bit, I mean he’s worth his weight in gold. And he’s a big dog.”

Reveles said he doesn’t “get to see them (the victims) in that state. Ever.” But Baxter, with his “unconditional love” and “Baxter kisses,” brought them there.

“It’s just that for that minute, he is their dog, sitting there next to them, and they’re sitting across, petting him,” Reveles said.

The sergeant said he hopes to expand the therapy dog program for GRACE Court.

“The rest of the court staff is (also) all over this dog. It’s amazing how much this one little pup can do,” Reveles said.

“He provides a tremendous amount of emotional support for not only our survivors, but for court staff as well,” said Nicole Strattman, CSEC coordinator with the County of Orange Social Services Agency, adding that he has "made a positive impact on our CSEC youth."

But the 100-pound support dog suffers from arthritis. He is also getting old and his hip is becoming a problem.

And now, he needs rehabilitation to continue his community work.

“Baxter’s job is taking a toll on his body because he needs to sit and stand for hours,” said Dr. Janet Suh, who works with Baxter at Healthy Paws Vet Care in Fullerton.

He attends the facility every week to obtain hydrotherapy using the underwater treadmill, physical therapy and cold laser therapy to help his muscles heal, Suh said.

The only way that Baxter’s work with GRACE court could continue is with these treatments, Timmons said -- without them, his body would not be able to take the rigor of his work.

The treatments do add up, so Suh set up a GoFundMe campaign to raise $5,000 for Baxter’s treatments. Any additional donations would go to other support service animals who serve the community, hence the campaigns’s name “Baxter and Friends,” according to the fundraising page. 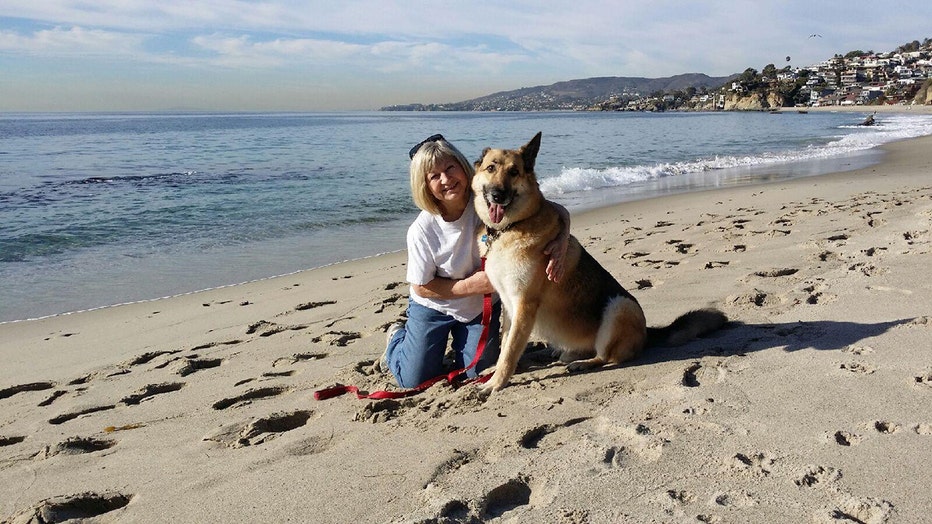 Baxter continues to give to his community as a certified therapy dog who also works with Canines for Christ Animal Assisted Therapy, Bright and Beautiful Therapy Dogs and Eastside Comfort Care Dogs.

He has provided therapy at various vigils for shootings and fire incidents, as well as at numerous assisted living facilities for adults and children, Timmons said. He also acts as a support dog at various Anaheim Police Department events.

Timmons said that Baxter is “truly happy” when he is serving others.