Hotels.com will give one couple $15K for a honeymoon if they mention the company during wedding vows

Hotels.com is giving one lucky couple $15,000 to spend on a lavish honeymoon — that is, if they’re willing to make some tweaks to their wedding vows.

LOS ANGELES - Weddings are notoriously expensive, but the celebratory getaway that occurs immediately after can also be a bank-breaking experience, so Hotels.com is giving one lucky couple $15,000 to spend on a lavish honeymoon — that is, if they’re willing to make some tweaks to their wedding vows.

Couples interested in entering the competition will have to mention “Hotels.com” at least once during the vows at their wedding ceremony, effectively turning their vows into sponsored content, a.k.a. #SponCon, for the booking giant.

The #SponCon Wedding promotion is in partnership with Hulu and is a nod to a recent episode of Mindy Kaling’s re-imagining of the classic RomCom Four Weddings and a Funeral, which she has turned into a TV show by the same name. The episode features a Hotels.com sponsored wedding in which the bride walks down the aisle in a veil that reads “Hotels.com” along the bottom of the train. 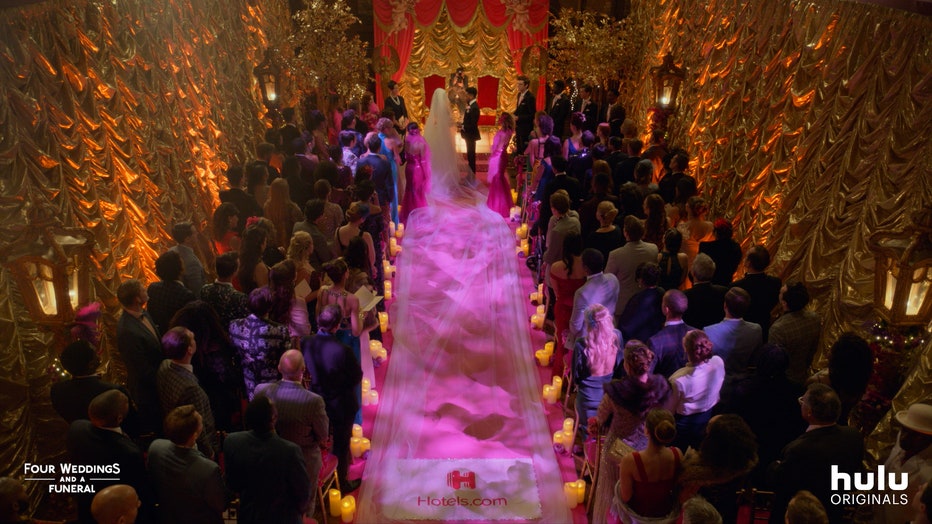 A still shot from an episode of the Netflix miniseries Four Weddings and a Funeral in which a couple has a sponsored wedding, complete with a "Hotels.com" logo on the bride's veil. (Photo Courtesy of Hotels.com)

The bride or groom will need to have someone film the vows at their wedding ceremony and post a clip that includes at least one mention of “Hotels.com” to a public, personal Twitter or Instagram account with the tag (@hotelsdotcom). Each entry must include the hashtag #HotelsSponConVows within the post.

The contest is open to U.S. residents over the age of 21, and contestants must enter before Sept. 23 to be considered for the grand prize. The winner will be announced before Oct. 1.