Dr. Charles Gerba warns that phones, which are essentially an extension of ourselves, are actually mobile germ devices.

LOS ANGELES - Dr. Charles Gerba, an environmental virologist and microbiology professor at the University of Arizona, has been studying how diseases transmit throughout the environment for years.

While many Americans have been keeping their hands clean to avoid transferring bacteria during the coronavirus pandemic, Gerba warns that phones, which are essentially an extension of ourselves, are actually “mobile germ devices.”

He and a group of researchers have been looking at ways to interrupt the spread of pathogens, including testing the effectiveness of different forms of disinfectants, cleaning strategies and optimal hand hygiene in a way that reduces the spread of viruses like the novel coronavirus.

According to the U.S. Centers for Disease Control and Prevention, COVID-19 is typically spread from close contact with another person, usually through respiratory droplets that either enter the mouth, nose or are inhaled by a person’s lungs. There is also growing evidence that the virus is airborne, meaning that it can potentially be contracted through smaller aerosolized droplets that linger in the air when an infected person talks or breathes.

The CDC advises people to frequently clean and disinfect touched surfaces “daily.” And what gets touched more than the surface of your smart phone?

Phones have a long history of being dirty

Phones have been dirty for a long time, and science has been sounding the alarm for years.

According to a 2011 study by the London School of Hygiene & Tropical Medicine, fecal matter can be found on one out of every six smartphones.

In a separate 2009 study of bacteria found on phones, researchers said, "Mobile phones have become veritable reservoirs of pathogens as they touch faces, ears, lips and hands of different users of different health conditions."

“Our cellphone is probably the most touched object that you have,” Gerba said.

“Cellphones get pretty germy,” Gerba said. “Particularly teenagers and cooks have the germiest cellphones in our studies.”

As if a germ epicenter in your pocket wasn’t cause enough for concern, Gerba warned that the crux of the problem is how phones make germs mobile.

RELATED: Is it safe to reopen schools during the pandemic?

“You pick up a germ on your hands and you put it on your phone, you put your phone in your pocket, take it home touch the phone and take the germ off,” Gerba explained. “So you just brought it home.”

Gerba added that flip phones were particular retainers of unwanted germs, since residue and material can get stuck in the crevices and buttons.

The everyday act of using a smart phone is as natural as breathing for most people. As Gerba said, “We’re generation touch,” adding that people in the information age touch more things than humans ever have in the history of our species, creating the “perfect storm” for a virus like COVID-19 to spread.

According to Gerba, the average adult brings their fingers to their face every 3 or 4 minutes. 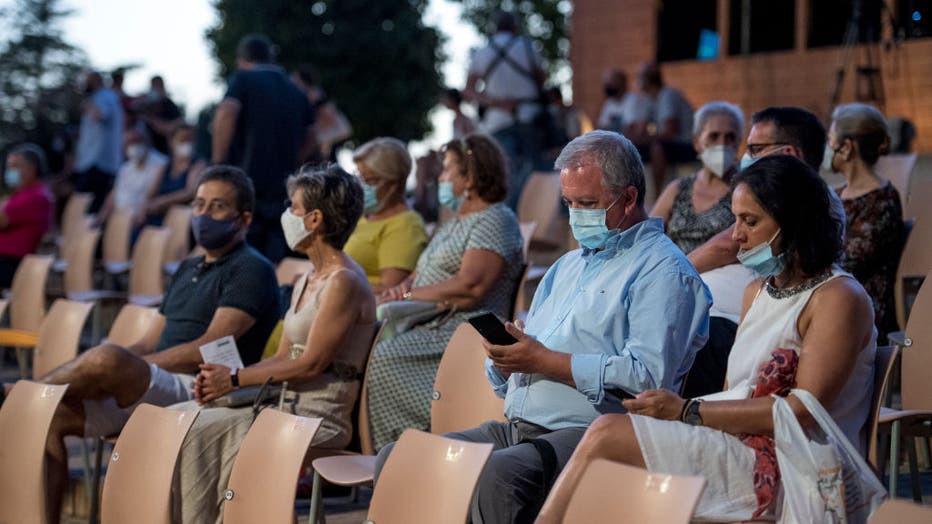 FILE - People wearing face masks look at their smartphones while they wait for an outdoor show. (Photo by Carlos Gil Andreu/Redferns)

While the novel coronavirus is currently one of the biggest offenders when it comes to the anxiety of contracting an illness, Gerba added that phones are vectors for all types of viral infections — not just respiratory ones.

“Cellphones have been shown to be involved in transmission of Methicillin-resistant Staphylococcus aureus (MRSA) bacteria in health care environments,” said Gerba.

According to the CDC, MRSA is a bacteria that is a cause of staph infection that is resistant to several forms of antibiotics. MRSA often causes skin infections, lung infections, and if left untreated can lead to sepsis.

The CDC states that adenoviruses are common viruses that cause a variety of illnesses that can range from cold-like symptoms, fever, sore throat, bronchitis, pneumonia, diarrhea and pink eye.

Every day we come into physical contact with something, and the technology behind smartphones been applied in most public spaces.

While using the self checkout in a grocery store may appear to be the safer option as it avoids contact with another person, Gerba advises shoppers to think about how many times the self-checkout screen has been touched by other people.

According to Gerba, there isn’t typically as much transfer of bacteria or virus from currency to your hands, because the fabric from a bank note is more porous with fibers that make it harder for harmful germs to come off.

Experts say cash does carry a risk of transmitting the virus, but the risk from cash so far is small compared with other transmission routes. A scientific paper published early in the COVID-19 outbreak found that the virus can live on cardboard for up to 24 hours and up to three days on plastic and stainless steel. The researchers, however, did not test whether it can live on banknote paper.

The presence of live virus particles on banknotes does not mean they are a health hazard, public health experts said. Virus particles are unlikely to return to the air, or aerosolize, once on a surface.

“It’s not impossible that there might be traces of virus on dollar bills but if you wash your hands it should provide adequate protections, you shouldn’t need anything else,” said Julie Fischer, a professor at the Center for Global Health Science and Society at Georgetown University, on C-SPAN.

How should you clean your phone?

It’s important to note that cleaning your phone improperly can damage it. You want to avoid getting moisture inside it or scratching the surface. Don’t spray cleaners directly on the phone, don’t dunk it in cleaning solutions, don’t spray it with compressed-air devices used to clean keyboards and avoid rubbing it with abrasive materials.

Instead, start by turning off the phone and unplugging all cables. Your phone shouldn’t be charging as you clean.

You can use Clorox wipes or wipes with 70% alcohol, which you can get at the drugstore, to wipe down your phone. Apple, which has cautioned against using household cleaners on its phones, says to do that “gently.” AT&T has further recommended wringing out disinfectant wipes before using them on a phone.

You can also use soft cloths to clean the phone, like a microfiber cleaning cloth or the cloths used to clean camera lenses or your glasses. Google says you can dip the cloth in soap and water, as long as you’re careful not to get moisture in the phone. AT&T says paper towels work, too. You can spray them with disinfectant. Again, don’t spray the phone itself.

Samsung, the world’s biggest phone manufacturer, says it’s offering a free phone-sanitizing service involving UV light inside U.S. Samsung stores and service centers. It will expand to other countries in the next few weeks.

The phone-cleaning step is one of many measures public-health authorities are recommending to try to slow the spread of the virus, which has infected 137,000 people worldwide. More than 5,000 have died. Most patients have only mild or moderate symptoms, but the elderly and people with existing health conditions are particularly vulnerable.