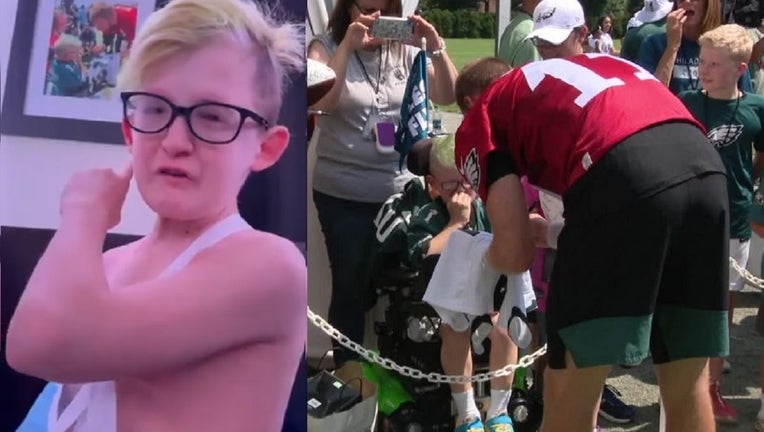 Back in 2019, Giovanni Hamilton told Carson Wentz that he was his hero. The moment went viral, warming hearts across the sports world. After Thursday's reported trade, Giovanni wanted to let Carson know, "you're still my hero."

PHILADELPHIA - While the trade that will reportedly send Carson Wentz to the Indianapolis Colts has drawn mixed reactions from Eagles fans Thursday, one of the team's biggest fans looked back fondly on the quarterback's time with the team.

Giovanni Hamilton's love for the Eagles and their players is well known throughout the fan base. On Thursday, he took to Twitter to react to the news the team had reportedly agreed to trade Wentz.

Wentz and Giovanni's friendship dates back to training camp in 2019 when the two shared a special moment that would later go viral.

As Wentz walked off the field that day, he stopped to greet Giovanni who was waiting on the sideline. Wentz greeted the Williamsport, Pennsylvania native with a hug and recalled meeting him at practice in previous years, and asked how he had been doing.

Giovanni, who continues to battle a rare genetic disorder, began tearing up and uttered, "You're my hero."

"You're still my hero," Giovanni said in the video he posted Thursday. "You always will be."

"That moment is what matters," he added as he pointed to a photo of their previous encounter.

Giovanni went on to ensure Colts fans that their team had made the right move in trading for Wentz, and thanked him for all he had done.

You can watch Giovanni's video here, or follow his podcast here.