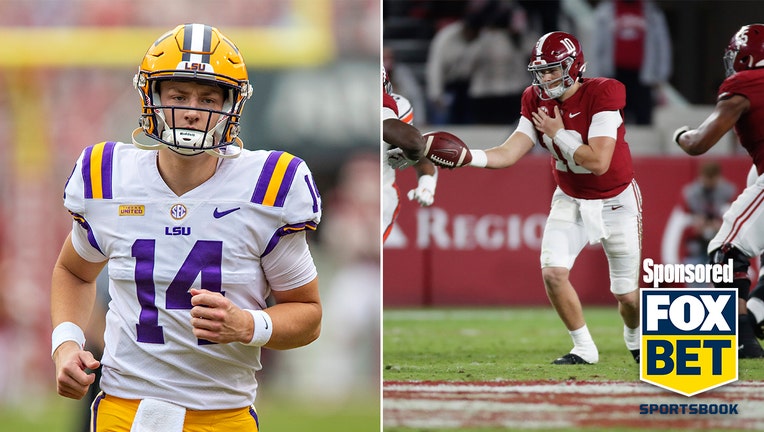 LEFT: Max Johnson #14 of the LSU Tigers warms up before a game against the Arkansas Razorbacks at Razorback Stadium on November 21, 2020 in Fayetteville, Arkansas. The Tigers defeated the Razorbacks 27-24. (Photo by Wesley Hitt/Getty Images) RIGHT: M

The annual clash between Alabama and LSU – two teams with national championship pedigree in their names- was delayed by three weeks because of an outbreak of COVID-19 in the Tigers program.

It may have only been delaying the inevitable for the LSU program.

Alabama in 2020 has been such a well-oiled machine that not having one of the best coaches in college football history on the sidelines – Nick Saban was out due to a positive COVID test- was nothing more than a speedbump for the Crimson Tide last week, who whipped No. 22 Auburn 42-14 in the annual Iron Bowl to improve to 8-0.

Still, the two will meet in Baton Rouge on Saturday night (8 p.m., CBS) in what will be the Crimson Tide’s last game before the SEC Championship game in Atlanta on Dec. 19.

The sports betting information
On FOXBet.com Sportsbook, Alabama was a 29 ½ point road favorite over the defending national champions on Tuesday evening. On the money line, the Crimson Tide were listed at minus-3300. (A $3,300 bet would be needed to win $100.) LSU was listed as +1400 – a $100 bet would win $1400.  No money line had been listed as of Tuesday night, so make sure you check in with FOXBet.com for the latest lines.

The history
The Crimson Tide hold a 53-26-5 advantage in the series, which had its first meeting in 1895. The two teams have played every year since 1957. Last year, the Tigers ended an eight game Alabama win streak as Joe Burrow helped lead a 46-41 victory in Tuscaloosa that was the main launching point for LSU’s run to the national championship. Keep in mind that Saban- who helped guide LSU to a national title in 2003- is 5-1 as Alabama head coach on the road in Baton Rouge with shutout victories in his last two trips there.

The storylines to watch
The most obvious question is whether Saban will be there at all. The 69-year-old head coach would be eligible to rejoin Alabama team activities on Friday on the SEC’s COVID protocols should he either not show symptoms or pass another test. Even still, Alabama showed no signs of issues with Steve Sarkisian running things last week against Auburn.

On offense, Mac Jones continues to make his Heisman case after a five touchdown performance against the Tigers last week in the Iron Bowl. Jones has 23 touchdown passes on the year and only three interceptions. Right now, Jones and Florida’s Kyle Trask are the frontrunners with Clemson’s Trevor Lawrence- who missed two games- still in the conversation for college football’s most prestigious award.

LSU’s season, however, has been nothing like the magic carpet ride that Ed Orgeron and company experienced in 2019. The Tigers have been playing catch-up from the jump since an opening night loss to Mississippi State in Death Valley. Road losses to Missouri and Auburn were highlighted by shoddy defense. The 20-7 defeat to Texas A&M was a result of an offense that turned the ball over three times. The Tigers have used three quarterbacks because Myles Brennan’s injury against Missouri ended his season. True freshman Max Johnson and TJ Finley both saw a lot of snaps against the Aggies. Having to go against Alabama as a freshman is a whole different thing.