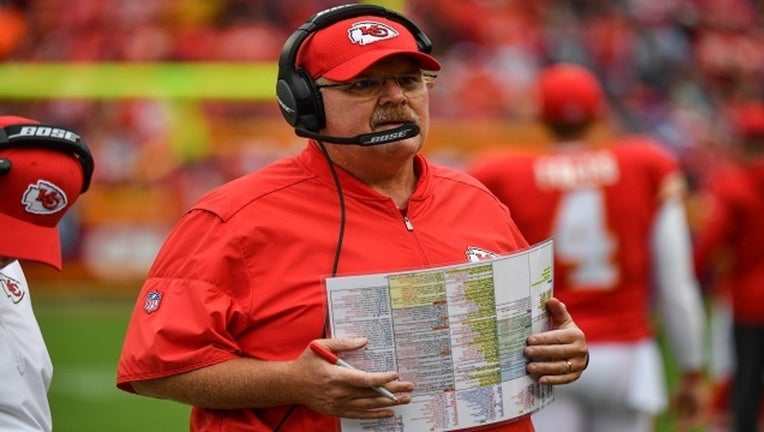 KANSAS CITY, Mo. - Andy Reid rarely digs into his own past, preferring to stay in the moment or focus squarely on the future. It's an approach that has served him well during a coaching career that might someday land him in the Pro Football Hall of Fame.

Yet when his Kansas City Chiefs faced a seemingly insurmountable hole in the divisional round of the playoffs, Reid caught himself thinking back almost four decades to his final game as an offensive lineman at BYU. It was the Holiday Bowl and SMU had taken a 45-25 lead in the fourth quarter. Just about everybody in Jack Murphy Stadium that night thought it was over, only to watch, stunned, as the Cougars scored three late touchdowns to win the game.

“That kind of stuck in there. You had that hope,” Reid said this week when asked what gave him confidence Kansas City could rally to a 51-31 win over the Texans for a spot in the AFC championship game. “You had that hope. Then it's the feel of your team. You're on the sideline, you've been down there long enough, you can sense what they're thinking, where their mind is at. These guys weren't flinching. Let's get it right.”

The Chiefs (13-4) got everything right the rest of the way. And the comeback from a 24-0 deficit propelled them into a matchup Sunday with Tennessee (11-7), which has merely knocked off the Patriots and top-seeded Ravens - on the road, no less - to reach the precipice of the Super Bowl.

It will be the first time coaching this deep in the playoffs for the Titans' Mike Vrabel, but it's certainly familiar territory to his counterpart. Reid had the Chiefs in the same position a year ago, when they lost in overtime to New England - the Patriots won the coin toss and marched downfield for a touchdown - and he led the Philadelphia Eagles to five NFC championship games during his 14 years in Philadelphia.

“I have done a few of these,” Reid said, “and you know, we try to keep it as normal as we possibly can as far as the schedule goes for the players, so they can get their work done. One thing that changes is how fast the game is. I can tell you from experience, the magnitude, every time you take a step up in the playoffs - it's single elimination.”

Experience is great. Successful experience is better, and that is where Reid falls short. His only conference title came during the 2004 season, when the Eagles lost the Super Bowl to the Patriots. And who should be on the New England roster that night but a game-wrecking linebacker named Vrabel, who even caught a touchdown pass.

Vrabel may not have any experience in this position as a coach, but has plenty as a player. He lifted the Lombardi Trophy three times with New England before finishing his career - coincidentally - with two seasons in Kansas City.

“I spent 14 years in the National Football League,” Vrabel said, “and I don’t even know how many playoff games, but those were good experiences about preparation and really focusing on what got us to this point from where we were at different points in the season. And then, there’s also things that I have to do as a coach to make sure that we’re ready."

On offense, that means pounding away with running back Derrick Henry and getting just enough production from Ryan Tannehill, just as the Titans did during a back-and-forth Week 10 win over the Chiefs.

On defense, it means slowing down the aerial assault of quarterback Patrick Mahomes and his fleet of game-changing playmakers: running back Damien Williams, tight end Travis Kelce and wide receivers Tyreek Hill and Sammy Watkins.

“I think there is a belief in one another, first and foremost," Tannehill said. "We've been through a lot this season, ups and downs, and won games in a lot of different ways. With that comes a lot of belief and a lot of confidence in one another."

The Chiefs have plenty of confidence in their own right. They haven't lost since that game in Tennessee, and their comeback last week gave them the belief they can overcome anything. Their offense is still shattering records and a retooled defense under new coordinator Steve Spagnuolo has been playing as well as any in the league.

“I think that with the Titans, the physicality and determination they play with is big," Mahomes said. "They’re going to get after it and fight for every single yard. Their defense is going to fly around to the ball and not give up on anything. We’re just trying to match that. We’re going to go out there and give it everything we have to come out with a victory.”

Henry already made history as the first player in the Super Bowl era to run for at least 180 yards in three consecutive games, and nobody has more yards rushing over the first four postseason games than his 561. He also has the three best games in Titans history for yards from scrimmage, set the franchise’s single-game postseason rushing mark in each of the past two weeks, and he even threw a jump pass for a touchdown in their 28-12 win in Baltimore.

Seemingly forgotten during the brilliant season of the Ravens' Lamar Jackson, Mahomes has again put together an MVP-caliber resume. He kept it going in the playoffs, too, becoming the first player to throw for at least 300 yards, run for at least 50 and throw five TD passes in a single playoff game last week against Houston. He's also healthy after ankle and knee injuries this season, including one that hobbled him in Week 10 against Tennessee.

The Titans have gotten back to the stingy defense they played much of the season, including the first seven games, when they didn’t allow an opponent to score more than 20 points. They've allowed only two touchdowns on seven chances inside their 20, thanks in part to the return of injured cornerback Adoree’ Jackson. Defensive captain and defensive lineman Jurrell Casey says they wanted to make sure and try to match what the offense has been doing.

“And it’s just guys locking back in,” Casey said.

The Chiefs' Travis Kelce became the first player with three postseason touchdown catches in one quarter in last week's comeback win over Houston. It was another highlight in another Pro Bowl season for the tight end, who has been dealing with some minor knee pain during the postseason but should be ready to go Sunday.

“Just got to keep your foot on the gas pedal," he said. “You can't get too excited; you can't get a sense of relief like, ‘Oh, we’re back in the game.' You got to keep going forward and know that you've got a lot of unfinished business.”

The Titans haven't won a conference championship since 1999 and haven't appeared in a title game since 2002, though to the Chiefs that probably seems like yesterday. It has been 50 years since they played in the Super Bowl, and they ache to give owner Clark Hunt the AFC championship trophy that bears the name of his father, team founder Lamar Hunt.

“We’re going to put the pressure on ourselves to find a way to win it,” Mahomes said. "When you fall that short and that close last year, the next step is to get to the Super Bowl. We understood that going into this season and we know it’s a long season. We know it’s a process. We know that day by day we have to get better. I think that’s what this team is great at, just getting better every single day and then going out and fighting until the end in every single opportunity we get.”